A Cabinet of Curiosities: Meraviglia in the 17th Century 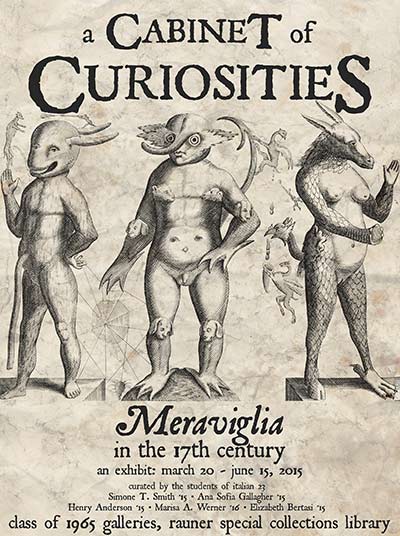 The seventeenth century was a period of wonder, anxiety, and discovery. This era, often referred to as the baroque, was one of change in the scientific, intellectual, and artistic realms. Careful documentation and new methods of classification examined exciting new discoveries and the everyday in unprecedented ways. The scientific revolution introduced new ways to understand and explain the natural world, often challenging classical perceptions of our place in the universe. Of particular interest were those with physical abnormalities, deemed monsters or prodigies; at the same time, death and deformity acquired a marvelous dimension. This exhibit examines the ways in which baroque minds explored the wonders of their reality.

You may download a small, 8x10 version of the poster: CabinetOfCuriosities.jpg. You may also download a handlist of the items in this exhibition: Meraviglia.

Case 1. Finding Meraviglia in the Natural and Ancient Worlds

The Baroque period—often called ‘the forgotten years’—was a time of discovery, innovation and consequently, change in Italian art and culture. Italy suffered many crises caused by wars and natural disasters, and underwent a difficult period of epistemological shifts as a result of these changes. Similarly to the Renaissance, the Baroque held the great achievements of Roman antiquity in high esteem. This period saw the appreciation of newly discovered ancient art, architecture, and philosophy, yet unlike previous periods it was forced to challenge and revise established world views. This was in part due to discoveries within the nuova scienza (“new science”) and scientists such as Galileo Galilei. While Galileo explored the stars using the telescope, others used the microscope to view the natural world in ways that it had never been observed before. Microscopic insects became huge, and immense and distant planets became visible. Another aspect of Italy’s new world view came from explorations across the globe and discoveries of other countries’ cultures and creatures. In order to capture and catalogue these curiosities, there were new developments in the science of cartography and in methods of categorization. As a result of these and other cultural transformations, there emerges a general anxiety towards the new and the potentially unknown, and also an exciting multiplicity of perspectives and a great feeling of meraviglia (“wonder”) for the world and its marvels.

1. Francesco Villamena, Portrait of Giovanni Alto, Antiquarian, 1623. Engraving with red and black chalk on laid paper. Reproduction of work from the Hood Museum of Art.

This engraving captures the antiquarian Giovanni Alto’s role as tour guide by depicting the presence of ancient marvels within the modern, living city. In the background there is a sprawling city, an arch overgrown with vegetation, yet prominent, and two statues of Castor and Pollux—the mythological twin brothers who form the constellation Gemini. In the foreground the broken foot of a statue, the overturned pedestal, the starving dog and the snake slithering from a skull all symbolize the sense of anguish that accompanied the wonder in this time.

These two small books on ancient Rome and modern Rome contain illustrations and descriptions of structures from their respective periods. Together they demonstrate how two different views of the Eternal City existed simultaneously. The everyday life of Romans continued alongside artistic wonders of Baroque art, and at the same time ruins were being studied and categorized due to curiosity and a desire to explore the marvels from local remnants of antiquity.

Galileo Galilei (1564-1642) was known as a scientist and writer throughout his lifetime. This book includes dialogues among three characters—Filippo Salvati, Giovanni Francesco Sagredo and Simplicio (a double entendre for the Italian world semplice for “simple”)—who discuss scientific methods and the debates for and against them. Due to its discussion of such theories as the heliocentric Copernican system, this book was condemned by the Church and placed on the Index Librorum Prohibitorum in 1633 until it was removed in 1835. It was above all this book that was responsible for Galileo’s condemnation and exile.

Robert Hooke was an English architect, natural philosopher and scientist. In this book are many spectacular engravings of the miniature world brought to this size for the first time from under the microscope, thus inciting both disgust and wonderful fascination in people who had lived alongside creatures such as the louse (pictured on the foldout above) their entire lives without knowing how they actually appear.

Pictured is an early form of museum owned by Ole Worm that functioned as a specialized personal collection of objects, some belonging to natural history or antiquities, called a “cabinet of curiosity” or “Wunderkammer”. Worm was an antiquarian which meant he studied and collected antiques and antiquities.

In the 1600s, the scientific revolution transformed the way Europeans viewed the world with a spate of inventions and advances. Among these were the first modern studies of human anatomy, in which canonical judgments about the workings of the human body began to be replaced with empirical evidence gleaned from corpse dissections. As doctors and natural philosophers came to a fuller understanding of anatomy, the anomalies they occasionally encountered with the body began to arouse more and more curiosity. Siamese twins, vestigial limbs, and other birth abnormalities were a constant source of fascination, and often this fascination drifted into the fantastic, with tales of human-animal hybrids and other improbable creatures. At an age when exploration was beginning to discover exotic new lands with strange people and strange customs, Europeans could easily imagine that these monsters, or prodigies, were alive and real in some distant corner of the globe.

First described by Alsatian polymath Conrad Lycosthenes, the central monster is one of the more famous and fantastic specimens. Born with a long tail, webbed hands and feet, and dog heads on his elbows and knees, he reportedly spoke the words “Watch, the Lord our God comes” before dying in infancy.

Widely considered one of the fathers of modern surgery, Ambroise Paré also took an interest in monsters and prodigies. From a 21st century perspective, tales of creatures such as the fish bishop may seem far-fetched and blatantly pseudoscientific, but during the 1600s, there was no clear line between hard science and the fantastic.

The figure on the left belongs to a putative race of humans called the Panotti who were rumored to use their long ears to keep warm in lieu of clothing. The figure on the right is a four eyed man said to have been seen in Ethiopia.

This diagram labels and describes the muscles of the human body. Increased knowledge of the body and its workings heightened interest in those beings, real or imagined, who deviated from the normal.

The heliocentric theory, which displaced man from the center of the universe, along with other scientific discoveries of the 1600s, provoked a sense of angst that shaped the 17th century: indeed, the precariousness and insecurity of man’s condition was echoed in both its art and literature. The epistemological change that was occurring, one that reversed prior understanding of the natural world, engendered a feeling of instability and mutability. This anxiety was reflected in the presence of vanitas and memento mori themes, but in the baroque manner: death was showed as sumptuously triumphant. Reminders of the fleeting aspect of time and life are present in the European baroque as can be seen from Dutch botanist, Frederik Ruysch’s representation of death to Italian poet Ciro di Pers’ frightening allegorization of time in Orologio da Rote.

Orologio da rote, published posthumously in 1666 in the collection of poems Poesie by the Italian poet Ciro di Pers (1599- 1663), is an example of memento mori in baroque literature. In this poem, an inanimate object becomes a symbol of the inevitable advance of death, which is accentuated by its menacing and relentless rhythm.

Dutch botanist and anatomist Frederik Ruysch was known for his fascination with corpses and cadavers. These spectacular memento mori themed tableaux are composed of fetal skeletons and other body parts. They represent the allegorical theme of death and the transiency of life in a paradoxically macabre and fanciful manner. From the tumors to the mayflies, insects that only live one day, every element depicted is a reminder of the brevity of life.

This still life vividly encompasses some of the key aspects of the vanitas leitmotiv: the religious undertones, evident in the Christian symbolism, remind the viewer of his mortality; the presence of the insects also reminds the viewer of death, as their life span is short, and the decaying plants are another reminder of the impermanence of all things.

In this cabinet, we seek to demonstrate the meraviglia as seen in everyday life during the Baroque. By cataloging the unfamiliar and the wondrous aspects of the New World as well as examining the seemingly banal facets of the quotidian, Baroque contemporaries provided a revolutionary perspective. From intricate atlases to the minutiae of insects, Baroque authors, artists, and philosophers sought to understand the marvels of their surroundings.  Their diligent recordings of the everyday afford us the opportunity to gain exposure to and a thorough understanding of their unique experiences and cultural phenomena. Objects seen as embodying both modern and traditional traits are explored in dynamic and unexpected ways. The items in this case illustrate these themes through both text and art.

This etching embodies the way in which daily life was incorporated into art at the time.  The scene, one of skaters enjoying a day on a frozen pond in front of a castle, offers a quaint example of how something mundane is transformed into something fascinating, dynamic and unexpected.

Even a subject as trite as insects becomes a marvel in this etching.  The detail and close study of forms in this collection brings the amazement of everyday minutiae to life.

This book, one of the first documented discussions and defenses of the Neapolitan dialect, gives insight into the ways in which even the most basic things, like human language, were thought of in a new and wondrous light.  The careful documentation of something as small and fundamental as words gives the reader a sense of awe with which to assess their language.

This book, which carefully documents the different clothing traditions and contemporary styles of the 16th century world, is another example of close study transforming everyday items into something sensational.  Marvel is found in the everyday, such as the Florentinian women's standard dress seen on this page.

Depicted here is a map of the world based on the information known during the 1600’s. It is interesting to note that the map doesn’t simply just provide geographical information, but rather also illustrates the categorical approach that was refined and cultivated during this period.

Showcased here is an explanation of how grain should be used, the health benefits of consuming it, and where it can be found geographically. This book functions as a catalog for food, and also underscores the importance of the everyday by demonstrating the true value of grain.

Pictured here is a sketch of dried vanilla beans, an example of one of the treasures discovered in the New World. In contrast to grain, which is categorized as an object of the everyday, the vanilla is seen as exotic and serves as a representation of modernity.