When Two Worlds Meet: East Asian Experiences in the West and at Dartmouth

East Asian and Asian-American students have been the most rapidly growing minority groups at Dartmouth College since the mid-20th century. However, archival records on the communities’ experiences are scarce as it was only around the 1970s that these students began to organize collectively around their shared ethnic and cultural identities. This exhibit provides perspective on East Asian and Asian-American student experiences on campus by looking at the archival records of some of the very first students of Asian descent at Dartmouth. To contextualize these students’ experiences at Dartmouth, the exhibit also presents glimpses of larger historical conversations between East Asia and the West. These conversations include attempts by East Asians to document and communicate their cultural heritage and life experiences to Western audiences. The other side of the conversation consists of Western perceptions and interpretations of East Asian civilizations, whether accurate or not. 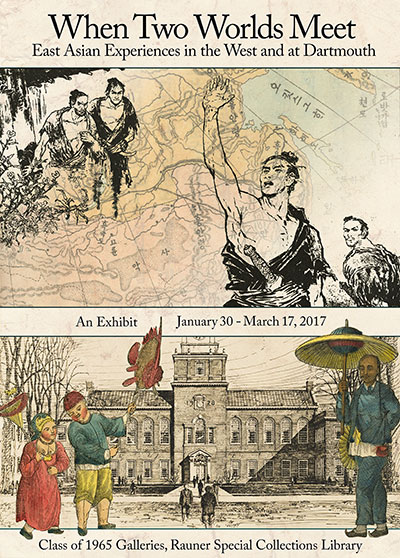 Despite their distinct cultural backgrounds, East Asian and Asian-American students tend to be brought together as a single ethnic and cultural entity at Dartmouth, mostly due to the small size of the student body. Establishing an East Asian and Asian-American community at Dartmouth is still an ongoing process. It was only in the 1980s that the College administration began to record the number of international Asian students and Asian American students under a separate enrollment census category. Starting in the late 19th century, students from East Asian countries enrolled at Dartmouth in small numbers and in the mid-20th century that the U.S. national students of Asian descent began to join the Dartmouth community. Concerted efforts to create social and cultural outlets for East Asian and Asian-American students began in the 1970s. The Asian Studies Program at Dartmouth was established in 1974 and was operated by faculty members across multiple departments teaching courses on the topics of Asian history and culture. Dartmouth Asian Organization was founded in 1975. The Department of Asian and Middle Eastern Language and Literature as we know it today only came to life in 1995.

Case 2. East Asian and Asian-American Experiences Around the World

The majority of Rauner’s collection of materials detailing East Asian and Asian-American experiences in the West is composed of very recent acquisitions, which explains the relative dearth of primary sources about this topic. Most of what we have are from wartime, when different groups of East Asians reached out to Europe and the United States to garner support for their political and diplomatic interests. For instance, two of the items featured in this case are Chinese propaganda graphic novels, one assailing the Communist Party’s brutality and another commemorating the feats of the Communist Party’s maritime scouts. Other materials are related to East Asian integration and segregation in the West during World War II. Agnes Bartlett, who was an Assistant Professor of Clinical Surgery at Geisel School of Medicine, worked at the War Relocation Authority Centers at Poston, Arizona, and Manzanar, California from 1944 to 1945. Rauner has materials from her time at the relocation centers, which provide valuable insights into the Japanese-American wartime experiences. Considering that many of the materials are propagandistic in nature, caution needs to be taken when interpreting them, although they still provide an insightful perspective on Asian interactions with the West and Western perceptions of East Asian culture.

Interaction between Western and East Asian civilizations can be traced all the way back to the Roman Empire. But it was not until the 16th century that western travelers explored Asia in a modern sense, through the development of sea routes and maritime technology. It was during this period that European explorers disseminated their observations and experiences in Asia to their fellow Westerners. As journeys outside of the Western world increased, an growing number of Europeans not only informed their home countries of the new world across the Atlantic but also sought to spread their culture’s values and ideas to Eastern civilizations. Some travelers went as far as to learn the native language of Asian regions in order to produce materials meant to spread Western thoughts and ideas.