“We look for light from within”: Shackleton’s Indomitable Spirit 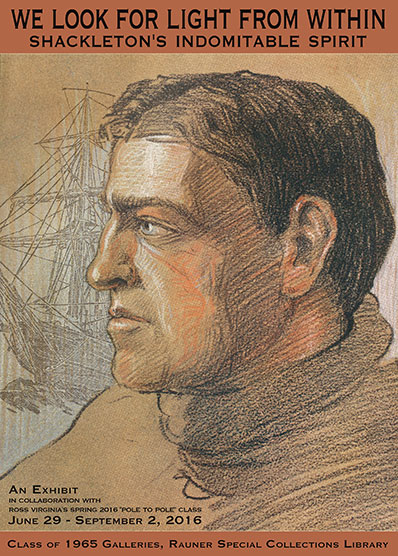 “For scientific discovery, give me Scott; for speed and efficiency of travel, give me Amundsen; but when you are in a hopeless situation, when you are seeing no way out, get down on your knees and pray for Shackleton.”

Shackleton—his name defines the “Heroic Age of Antarctica Exploration.” Setting out to be the first to the South Pole and later the first to cross the frozen continent, Ernest Shackleton failed. Sent home early from Robert F. Scott’s Discovery expedition, seven years later turning back less than 100 miles from the South Pole to save his men from certain death, and then in 1914 suffering disaster at the start of the Endurance expedition as his ship was trapped and crushed by ice, he seems an unlikely hero whose deeds would endure to this day.

But leadership, courage, wisdom, trust, empathy, and strength define the man. Shackleton’s spirit continues to inspire in the 100th year after the rescue of the Endurance crew from Elephant Island.

This exhibit is a learning collaboration between the Rauner Special Collections Library and “Pole to Pole,” an environmental studies course taught by Ross Virginia examining climate change in the polar regions through the lens of history, exploration and science. Fifty-one Dartmouth students shared their research to produce this exhibit exploring Shackleton and the Antarctica of his time.

You may download a small, 8x10 version of the poster: WeLookForLight.jpg. You may also download a handlist of the items in this exhibition: We Look For Light.

In 1901, the first British Antarctic expedition in sixty years commenced aboard the Discovery, a newly-constructed vessel designed specifically for this trip. Commanded by the promising young naval officer Captain Robert Falcon Scott, the expedition led the vanguard in Britain’s resurgent enthusiasm for polar exploration. Many of the officers who accompanied Scott on this inaugural voyage would later become household names for polar exploration, including a young Ernest Shackleton, a Merchant Navy officer at the time. Despite initial excitement about the mission, the men’s inexperience with cold weather conditions resulted in a series of discouraging setbacks. In the midst of this, Shackleton was charged with the task of planning activities and publications that would help the men stay positive about the mission. His concern for his fellow crewmen and their mental health stayed with him when he led his own expeditions deep into the heart of the southern continent.

It is hard to imagine how deeply polar exploration penetrated the popular imagination during its heroic age. The public followed adventures in northern and southern regions as closely as they watched the space race in the 1960s or the ever-changing technological frontier of today. At its most basic level, the British Antarctic Expedition (1907-09), or Nimrod expedition, was a failure. It did not achieve its main objective to reach the South Pole, but Shackleton’s decision to turn back only ninety-seven miles from the pole to ensure the safety of his men made him a national hero.

The expedition garnered ink in popular magazines, and inspired expensive, limited editions for the wealthy. It even produced the first book printed and published on the Antarctic continent.

After Amundson reached the South Pole just weeks before Scott, the Imperial Trans-Antarctic Expedition (1914-1917), headed by Ernest Shackleton, set out to cross the Antarctic continent by land. Once again, Shackleton failed, but he successfully kept his party alive after natural disasters derailed the expedition. The group's ship the Endurance became trapped in ice and sank, leaving the men to escape in three lifeboats to the uninhabited Elephant Island. From there, six men aboard the lifeboat James Caird, captained by Shackleton, set out for South Georgia Island, a whaling outpost. After a harrowing journey, the men reached South Georgia Island and a full-scale rescue mission was launched to retrieve the remainder of the party.

On the other side of Antarctica, the Aurora was supposed to lay supplies for the men crossing the continent, but the ship broke its moorings and drifted away with most of the party's supplies. The men faced starvation and scurvy and three died, but they continued to lay supply depots, ignorant of the Endurance’s own tragedy. They were rescued five months after the Endurance’s crew

The Endurance expedition tested the limits of human endurance. Today, it is remembered as Shackleton's greatest moment; his leadership saved the lives of all the men who sailed on the Endurance.