Sharing the Computer: How the Dartmouth Time-Sharing System Made Computing (More) Accessible 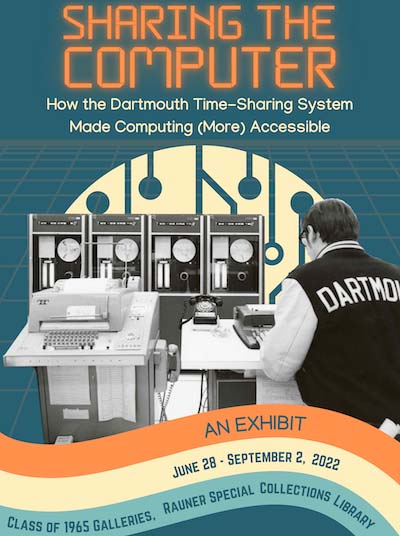 Looking around campus today, it is hard to believe, but there was once a time when Dartmouth didn’t have any computers. And when Dartmouth did first acquire a computer, like many institutions at the time, they faced obstacles sharing access with the Dartmouth community. It was the 1960s; computers were big and expensive, and hardly anyone knew how to use them. But when John McCarthy, a computer scientist at MIT, told Dartmouth math professor Thomas Kurtz, “you guys ought to do time-sharing,” Kurtz realized this could be the answer to Dartmouth’s problems.

Time-sharing worked by allowing multiple users to connect to a single, powerful computer via teletype terminals. The computer couldn’t actually run more than one program simultaneously but instead cycled through them very quickly. And while one person was typing, or thinking, or getting distracted at their own terminal, the computer wasn’t sitting there waiting for them: it was keeping busy running other people’s programs. This efficient arrangement allowed many, many more people to learn to use a computer for the first time, and eventually, the effects of the Dartmouth Time-Sharing System (DTSS) reached even beyond Dartmouth.

The exhibit was curated by Val Werner '21 and will be on display in Rauner Special Collections Library’s Class of 1965 Galleries from June 28, 2022, until September 2, 2022. You may download a pdf of the exhibit handlist. A printable version of the poster can be downloaded.

Case One: The People Behind the Computer

Professors John Kemeny and Thomas Kurtz were the two faculty members who first drove the implementation of computing at Dartmouth, both promoting the philosophy that computing should be as accessible to an undergraduate student as an open-stack library. But they didn’t do it alone. Once Dartmouth acquired its first pre-DTSS computer, Kemeny and Kurtz quickly realized how much potential students had for developing the system itself; Kurtz marveled that “they could glom onto this new technology just like that.” As the legend goes, a group of students ran the first BASIC program on the Dartmouth Time-Sharing System at 4 AM on May 1st, 1964: neither Kemeny nor Kurtz remembered even being there. Over the following decades, undergraduates continued to function as the systems programmers (or “sysprogs”) who kept the DTSS running.

Kurtz and several students work in College Hall (now Collis), the first home of computing at Dartmouth and the birthplace of the DTSS.

Stephen Garland ’63 was among the first undergraduates who began working with Kemeny and Kurtz on computing, programming Dartmouth’s LGP-30 and laying the groundwork for the time-sharing system to come. Kemeny’s letter shows how carefully these students were selected and, in Garland’s case, actively “recruited.”

The sysprogs in February 1977 signed this “time capsule” and declared that it should be opened in 100 years. The names belong to many class years, including some who were first-years at the time. Unfortunately, the contents of the time capsule had to be removed in 2005, when we discovered that the beer was leaking and causing mold to grow in the box it was stored in.

This photo documents a 2007 reunion of many of the original DTSS sysprogs.

John Kemeny’s car displayed this tribute to BASIC, the programming language Kemeny created for the DTSS. He intended BASIC to be an easy-to-use language for the flood of inexperienced users who would now have access to a computer.

Case Two: The Computer Behind the Scenes

An inexperienced person using the Dartmouth Time-Sharing System might think of the terminal they were typing into as the computer itself, and this was intentional. The large, powerful computer that was the core of the DTSS stayed mostly out of sight and out of mind, allowing users to feel less intimidated and more free to experiment. But while the average user could ignore the hardware, finding a computer that could handle the demands of time-sharing was the key to pulling off the DTSS experiment in the first place, and that wasn’t so easy. Fortunately, a pair of computers from General Electric—one to communicate with the teletypes, and one to run the programs—was able to get the job done.

Thomas Kurtz and Anthony Knapp ’63 originally approached GE hoping they would donate a computer for the time-sharing system. Although GE declined to give away a free computer, they agreed to sell it at a discount, and so the GE-225 became the first DTSS computer.

This page lists only some of the equipment that Dartmouth purchased from GE to build the original time-sharing system. The full invoice added up to $441,762, which equates to about $4.2 million in 2022—and that’s not including the monthly maintenance charges!

These pieces are from two different versions of the DTSS: the disk comes from the original 1964 time-sharing system, and the motherboard was part of the second version, which was developed in the late 1960s and used a newer GE-635 computer.

Especially in the first few years in the DTSS, the equipment would be periodically replaced with newer technology. (The “Honeywell” in this photo actually says “General Electric” if you squint, and it was probably part of the original DTSS setup in 1964.)

General Electric sold its computer division to Honeywell in 1970, so this part could date from the 1970s or later.

Case Three: The DTSS at Dartmouth (and Beyond)

Once it was up and running, the DTSS transformed Dartmouth’s campus. The Kiewit Computation Center was constructed to house the new computing equipment and rows of teletype terminals for anyone who wanted to use them. Many classes began to incorporate computing, and students discovered they could use the computer for fun, too. The DTSS gave more people than ever the opportunity to use a computer, although these opportunities mostly benefited Dartmouth's privileged population. But even beyond Dartmouth, the DTSS reached a significant network of locations, and it led to innovations that influenced computing across the entire world—most notably, the BASIC language.

New users could ask the DTSS to EXPLAIN various topics, like COMMANDS or what to do if they made a MISTAKE. Here is how the DTSS responded to “EXPLAIN DEATH” and “EXPLAIN PROTEST.” (This was during the Vietnam War, so "protest" was a familiar concept on many college campuses, Dartmouth included.)

2. “The Future Impact of COMPUTERS: A Conference to Dedicate The Kiewit Computation Center at Dartmouth College,” 1966. Call Number: ML-101, Box 24.

Not only did Kiewit provide access to computers, it also offered mini-courses for those looking to expand their skills. Information about these courses was available via the DTSS if a user typed the “EXPLAIN LECTURES” command.

Because time-sharing made the computer so easily accessible, students across all disciplines could use it, and this chart shows that social sciences and humanities majors actually used slightly more of the computer resources than those majoring in the sciences.

6. “Now YOU Can Program a Computer in BASIC: A New Dimension in Data Processing.” General Electric, no date. Call Number: MS-1144, Box 19, “Teaching: Correspondence re. Computer Science incl. letters to and from John Kemeny”.

This publication by General Electric advertises their new time-sharing service using “General Electric BASIC.” While Kurtz and Kemeny allowed others to copy or create their own versions of BASIC, some of the student programmers resented GE’s reluctance to credit Dartmouth, going so far as to hide code in the ALGOL compiler they’d created so it printed “Dartmouth ALGOL” every time it ran. Try to find where Dartmouth is mentioned in this ad!

Within the first decade of the DTSS, Dartmouth’s computer could be accessed not only by teletypes on campus but also by other schools in New Hampshire, Vermont, Massachusetts, Maine, and Connecticut.

BASIC became so popular outside of Dartmouth that textbooks were written and published about it worldwide in a variety of languages, including Japanese, Russian, and Portuguese. This Japanese edition was previously published in French as Le Basic par le Pratique.