Budd Schulberg and the Scripting of Social Change 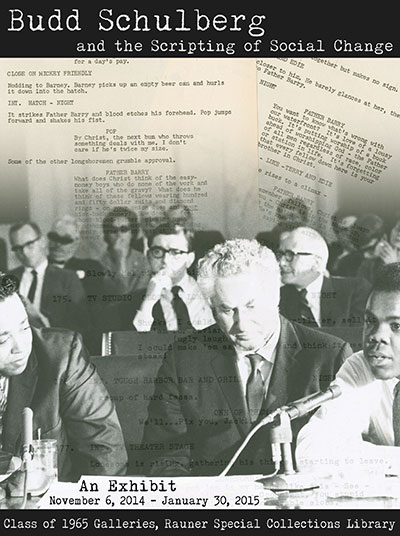 The Papers of Budd Schulberg at the Dartmouth College Library (MS-978) contain over 180 linear feet of correspondence, scripts, and drafts documenting Schulberg’s career as an author and screenwriter. This exhibit looks at how Schulberg used his identity as a writer to fight for social change. Whether writing the scripts for On the Waterfront and A Face in the Crowd, or establishing the Watts Writers Workshop, Schulberg strove to stir our social conscience through powerful narratives that dealt with labor reform, racial equality, and progressive politics.

You may download a small, 8x10 version of the poster: Schulberg-SocialChange.jpg. You may also download a handlist of the items in this exhibition: Schulberg.

Case 1. On the Waterfront: A Mission, Not a Movie Assignment

For Budd Schulberg, On the Waterfront was not a conventional movie assignment. It was a mission to make the voices of protesting longshoremen heard by bringing their struggles against organized crime on New York and New Jersey’s docks to the silver screen. Working closely with producer Elia Kazan, Schulberg finished writing the screenplay for On the Waterfront in 1954. The film scored at the box office, won eight Academy Awards, and has been hailed as one of the top ten films of all time.

More important for Schulberg than all the accolades the film received, however, was its role in bringing attention to the injustices plaguing the docks and the dire need for labor reform. Schulberg firmly believed that once the American public witnessed the assault on human dignity and the brutal reality of life on the waterfont, a wave of support for the plight of the longshoremen would ensue.

Case 2. A Face in the Crowd and the Cult of Personality in America

A Face in the Crowd, starring Andy Griffith, Patricia Neal and Walter Matthau, recounts the story of a back country entertainer named Lonesome Rhodes and his whirlwind rise to fame, fortune, and power on national television. Film producer Elia Kazan worked with Budd Schulberg to create this provocative film that questions the cult of personality fostered by the newly popular medium of television. As Schulberg stated in a letter to Kazan in 1956:

Whether it is Milton Berle, Arthur Godfrey, Jackie Gleason, Bishop Sheen or Disneyland, it is evident that a new personality or show can strike this world with the force and suddenness (and sheer shattering noise) of lightning.

As television became ubiquitous in the United States during the 1950s, entertainment, advertising, and politics became increasingly indistinguishable from one another. The critique offered by A Face in the Crowd remains relevant today as mainstream culture and the cult of personality continue to influence American political and social movements.

Case 3. Schulberg and the Voices of Watts

In August 1965, a large-scale riot broke out in Watts, a deeply impoverished African-American neighborhood in South Central Los Angeles. The Watts Riot was both the largest and costliest urban rebellion of the Civil Rights era and was a result of the Watts community’s longstanding grievances with high unemployment rates, substandard housing, and inadequate schools. In the wake of the riot, Schulberg started the Watts Writers Workshop to provide a venue where community members could write and discuss their anger and dissatisfaction. It was Schulberg’s goal to help Watts address the societal issues and profound racial injustices that were exasperated and woefully unresolved by the burst of violence and confusion of the riot.

Contrary to the dominant narrative of white America that painted the Watts Riot as yet another example of black youth squandering their lives in the chaos of a ghetto, Schulberg saw American society at large as the chief culprit for the stagnation, poverty and lack of opportunity for advancement in Watts. Through the Watts Writers Workshop, Schulberg hoped to provide the community a space that not only fostered creativity and notions of self-determination but also questioned the social constructs and strict racial binaries that plagued American society in the 1960s.