Richly Coloured and Finely Wrought:
The Bindings of Sangorski & Sutcliffe 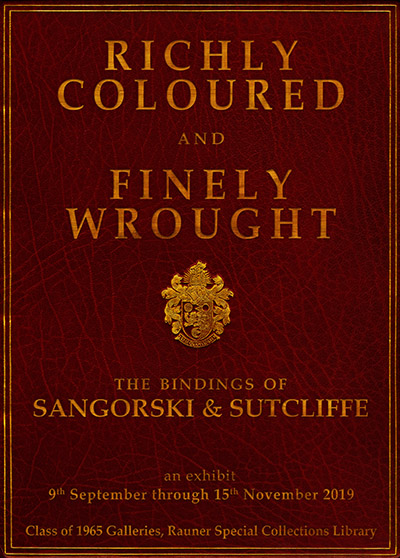 Francis Sangorski (1875 – 1912) and George Sutcliffe (1878 – 1943) met in 1896 in an evening class in bookbinding methods and techniques at the London County Council Central School of Arts and Crafts. Both showed such promise that they were awarded scholarships to continue their studies, eventually becoming apprentices to Douglas Cockerell and also teaching bookbinding themselves at Camberwell College of Art. An economic downturn in 1901 led to the loss of this employment, so they formed their own firm, doing business as Sangorski & Sutcliffe. Their abilities were recognized so quickly by the wealthy establishment that they received commissions to bind service books for the 1902 coronation of Edward VII and Queen Alexandra. This recognition propelled them into the forefront of British fine binders.

Rauner Special Collections Library is fortunate to hold about 100 examples of the work of Sangorski & Sutcliffe, thanks, primarily, to the generosity and interest of Allerton C. Hickmott, Class of 1917, and his wife, Madelyn C. Hickmott.

We now offer for your visual delight a highly selective mix of Dartmouth's Sangorski & Sutcliffe bindings in the present exhibit, Richly Coloured and Finely Wrought, the bindings of Sangorski & Sutcliffe. The exhibit has been curated by Eric Esau and is on display in the Class of 1965 Galleries from September 9th through November 15th, 2019.

3. Henri Estienne. World of Wonders: or an Introduction to a Treatise Touching the Conformitie of Ancient and Moderne Wonders. London: John Norton, 1607. Hickmott 716