A Richer Dust: Rupert Brooke & The Culture of Mourning 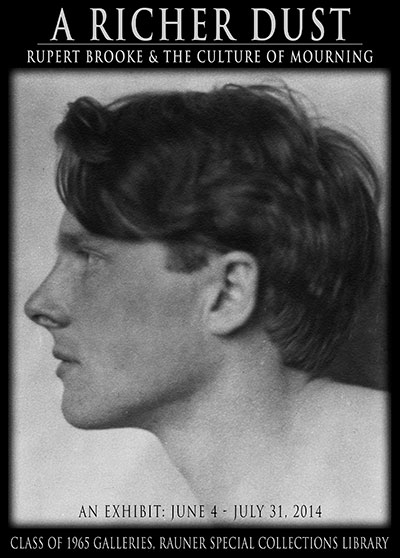 Rupert Brooke was a poet and an icon of youth for the literary and artistic circles of the early twentieth century. In April 1915, while serving in the Royal Navy during the First World War, Brooke died of blood poisoning. Brooke’s poem “The Soldier” – “If I should die, think only this of me:/ That there’s some corner of a foreign field/ That is for ever England” – is one of the most famous war poems of all time, and has become a symbol of the war’s early patriotic fervor. Rauner Special Collections Library holds one of the world’s finest collections of Brooke-related material. Brooke’s legacy unfolds in books, letters, and the print culture of the First World War era.

The exhibition was curated by Laura Braunstein and Morgan Swan and was on display in the Class of 1965 Galleries from June 4 through July 31, 2014.

You may download a small, 8x10 version of the poster: RupertBrooke-CultureOfMourning.jpg. You may also download a handlist of the items in this exhibition: RupertBrooke.

Rupert Brooke was born in 1887 the English Midlands town of Rugby, where his father was a master at Rugby School. He is chiefly remembered today for his poetry, but among his contemporaries he was an icon of youth and the promise of literary talent. Brooke, at various times referred to as a “young Apollo,” the “handsomest man in England,” and a “lithe and radiant figure,” played the muse for the literary and artistic circles that he frequented. Still, he was more than just a pretty face; his dissertation, John Webster and the Elizabethan Drama won him a fellowship to King’s College, Cambridge, and he published poetry and contributed regularly to various literary publications. Like many young men of his class and era, Brooke also amassed a significant library that included a collection of Catullus’ poetry and Arthur Conan Doyle’s The Last Adventures of Sherlock Holmes as well as volumes dedicated to him or written about him by his admirers.

When World War I began in the fall of 1914, Rupert Brooke was commissioned into the Royal Navy Volunteer Reserve as a sub-lieutenant. He participated in the failed defense of Antwerp a few months later, where he witnessed first-hand the true brutality of the war. In a February 1915 letter to poet and critic Edmund Gosse, Brooke reflects on the loss of friends as a result of the ongoing conflict. Several months later, Rupert Brooke would himself die aboard a French hospital ship near the Greek island of Skyros on April 22, 1915. The cause was not a war wound but blood poisoning caused by a severely infected mosquito bite. Brooke’s poetry had begun to garner widespread attention after two of his war sonnets, “The Dead” and “The Soldier,” were published in The Times Literary Supplement. A month after he died, 1914 & Other Poems was published and became wildly popular, requiring eleven subsequent impressions in that year alone. This explosion of Brooke’s popularity was fueled by the tragic circumstances of his death, an event that Brooke anticipated in his poetry. The numerous versions of Brooke’s works that appeared after his demise speak to the immediate impact they had, but also to their continuing significance decades later: a Braille version of 1914 with a handwritten dedication to a son who died in the Battle of the Somme; a 1940 Armed Services Edition of Brooke’s collected poems; and two editions of a selection of Brooke’s sonnets set to music, with the title of the later edition altered slightly to capitalize upon the surge of public interest in the poet.

Rupert Brooke’s death and the subsequent publication of 1914 inspired an outpouring of eulogistic prose and poetry lamenting the loss of such an inspiring young man. Despite this postmortem adulation of Brooke as a tragic and stirring example of British patriotism, not every voice praised the young writer. After Brooke’s death, his close friends and fellow poets took great pains, both privately and publicly, to separate public sentiment for Brooke the person from Brooke’s actual literary talent. One of these comrades, Edward Thomas, was a fellow member of the Dymock Poets, a group of writers who lived in the vicinity of the village of Dymock in Gloucestershire, England, just before the war.  In a letter to Robert Frost, Thomas remarks that Brooke “lacked power of expression.” Harold Monro, publisher of the anthology Georgian Poetry, warned that it was “a foolish but common public failing to attach some special interest to a man’s verses on account of painful or romantic circumstances connected with his death.” Still, despite these attempts to regulate the strength of feeling about Brooke’s poetry, the popular appeal of his passionate lines came to define a jingoistic philosophy towards the war that would later be challenged by poets such as Wilfred Owen and Siegfried Sassoon.