Map Stories: A World on a Page 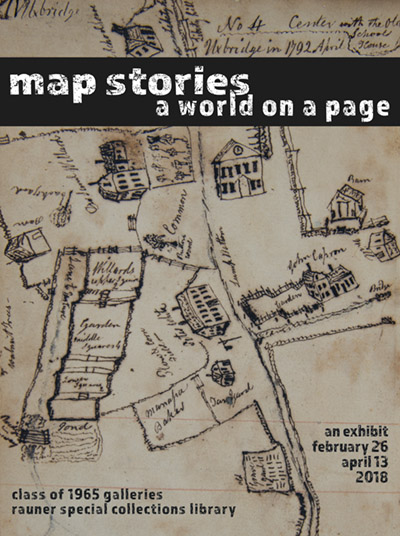 From giant atlases to pocket guidebooks, topographies, or Google Street View, something about maps inspires curiosity and wonder. Perhaps it is the ability to see and imagine an entire world from a single page; while maps are useful tools for physically navigating between locations, they can also transport us to anywhere and everywhere from within the confines of our own homes. When we look at maps we remember where we’ve been, anticipate future destinations, dream about places we might never go, and envision lands that do not exist. Maps are also much more than what we see on the surface – they tell a story about the people who made them and the people who use them. What a map includes and how it bounds, portrays, and names those places or landmarks make statements about politics, cultural differences, and historical trends. The maps included here tell a range of stories from across time, in worlds real and imagined.

You may download a small, 8x10 version of the poster. You may also download a handlist of the items in this exhibition.

While all maps reproduce the appearance of a particular space, they do so in a multitude of diverse ways; the perspective that the cartographer chooses to emphasize when translating three-dimensional space into two dimensions has a significant impact on how viewers imagine space and themselves within it. The finished map reveals how the cartographer thinks about and understands the space depicted, and creates an opportunity for conversation across time and space between the cartographer’s perspective and the viewer’s.

We often assume that maps provide information that is as solid and certain as the ground they typically portray. As navigational tools, maps are supposed to identify a set of directions or a path that ensures our arrival at our destination. But maps frequently involve more speculation than we expect; a map can also be an opportunity to tell a story without words or characters. Each viewer brings his or her own knowledge and beliefs to bear when assessing a map, and the interface between these perspectives and the maps in question offers insight into how ideas have changed across cultures and throughout time.

The primary use for maps is arguably to aid travelers’ successful navigation from one place to another. The routes between significant destinations, however, can be represented in a variety of ways and require a range of tools or information to utilize effectively. Challenges to traditional ideas about maps create possibilities for “maps” that visualize space in unique ways, provide radically different information, and ultimately tell their own stories about travel and journeys.