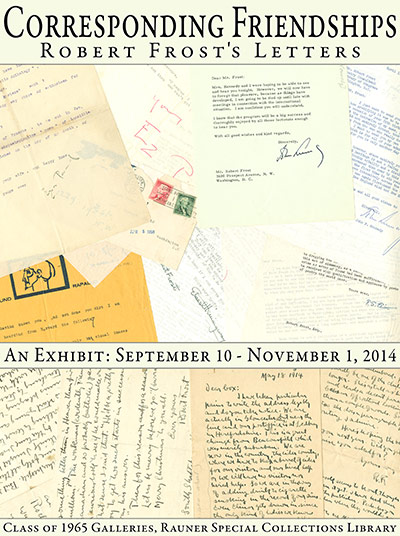 The Dartmouth College Library's Robert Frost Collection contains tens of thousands of letters to and from the poet. This exhibit looks at conversations among Frost and his correspondents -- his friends the literary scholars Sidney Cox and Cornelius Weygandt, poet and modernist impresario Ezra Pound, and President John F. Kennedy. The letters span two continents and fifty years of Frost's life -- from 1913, when he began publishing poetry in London, to 1963, just before his death in his beloved New England.

The exhibit was curated by Laura Braunstein and Jay Satterfield and was on display in the Class of 1965 Galleries September 10 - November 1, 2014.

Robert Frost’s correspondence files, which make up the bulk of Dartmouth’s 27-box Robert Frost Collection [now 39 boxes, MS-11178], contain tens of thousands of Frost’s incoming letters. Because Frost was not one to keep copies of most of what he sent, the files have far fewer of his outgoing letters. But, with two personal relationships—those with Sidney Cox and Cornelius Weygandt—we are lucky enough to have both sides of the exchanges.

Frost was teaching at Plymouth Normal School when he first met Sidney Cox, a recent college graduate and high school teacher. The two struck up a friendship that would last forty years. Some of the richest letters in our collection, those that reveal Frost’s working and personal life, are ones he wrote when in England to Cox, then a graduate student at the University of Illinois.

Cox went on to the University of Montana, where he was fired from his position in 1926 for allowing students to include the phrase “son-of-a-bitch” in a college publication. With Frost’s ringing endorsement, Cox was immediately hired by Dartmouth, where he remained for the rest of his teaching career. Frost’s relationship with Cornelius Weygandt began professionally, but quickly grew into a deep friendship. The two shared a literary sensibility and admired many of the same writers. They also both appreciated and wrote about New Hampshire’s rural character.

If politics makes strange bedfellows, poetry—when combined with politics—can foster even stranger relationships. Robert Frost met Ezra Pound at a bookstore party in London in 1913. Pound took Frost under his wing (somewhat reluctantly on Frost’s part), introducing him to other American poets living in England at the time, and to luminaries such as William Butler Yeats. While Frost benefitted from Pound’s patronage at first, later correspondence attests to a disintegrating relationship as the two went their separate ways, philosophically, stylistically, and politically.

After a period of estrangement, Frost joined—and later helped to lead—an effort to have Pound released from St. Elizabeths Hospital in Washington, DC, where Pound had been confined to avoid prosecution for treason. Despite Pound’s pro-fascist radio broadcasts from Italy during the Second World War, his poetry had long been admired in literary circles. In 1949, while still in Saint Elizabeths, he won the inaugural Bollingen Prize for Poetry awarded by the Library of Congress. In 1957, Frost joined with poet and former Librarian of Congress Archibald MacLeish to tap into their literary network to persuade the Assistant Attorney General to drop the charges. Supporters included such writers and public figures as Ernest Hemingway, T. S. Eliot, and Frank Lloyd Wright. Their successful campaign resulted in Pound’s release to the care of his wife and daughter.

In the late 1950s, Frost had been appointed Honorary Consultant in the Humanities at the Library of Congress. By this time, Frost’s reputation as a poet and public intellectual was firmly established. Frost spoke publicly of his support for then-Senator John F. Kennedy in the 1960 election. According to several biographies, Kennedy had ended many campaign speeches alluding to Frost’s “Stopping by Woods on a Snowy Evening”—“miles to go before I sleep.” Given their relationship of mutual respect, it is no surprise that Kennedy chose Frost to speak at his Inauguration in 1961.

Frost planned to read his 1941 poem “The Gift Outright.” He intended to open with a few remarks on religious liberty to acknowledge Kennedy’s election as the nation’s first Catholic president. In subsequent drafts, he transformed his preface into a poem: “Dedication.” The morning of January 20, 1961, was cold and the sun burned brightly. Frost, then in his late eighties, was not able to see the page on which he had written “Dedication,” and so instead, to the nation’s delight, recited “The Gift Outright” from memory. He changed the last line from “Such as she was, such as she would become” to the more positive “such as she will become,” as Kennedy had earlier suggested.