Educated from classical texts such as Pliny’s Natural History, early explorers and settlers found in the New World many of the creatures and peoples described in antiquity as residing on the edges of the world. From unicorns to hydras to fantastic peoples, expectations were met as Europeans entered new lands.

The exhibition was curated by Pauline M. Gonzales, graduate student in Comparative Literature, and Jay Satterfield, Special Collections Librarian, and was on display in the Class of 1965 Galleries from November 4, 2009 to January 5, 2010.

You may download a small, 8x10 version of the poster: Beasts and Monsters (1.5 MB) You may also download a handlist of the items in this exhibition: Beasts Monsters. 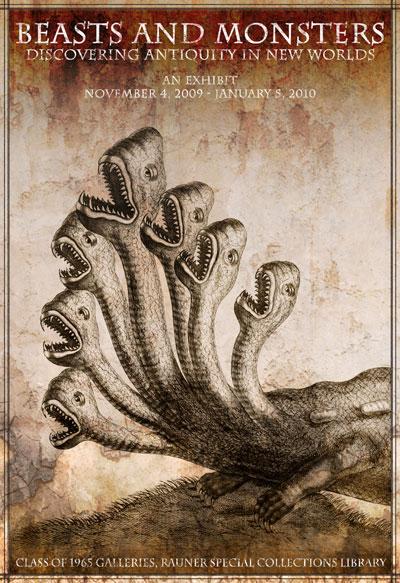 As explorers set out from Europe, their existing knowledge of the old world shaped their perceptions of what they saw in the new one. Classical texts, like Pliny's Natural History, provided descriptions of the known world, and formed a collective framework of ideas and concepts. Explorers, cartographers, and settlers alike, informed by their preconceived notions found the peoples and animals that had been documented in antiquity. Thus, the ideas of fabled peoples and animals that the European peoples were born into set up expectations of what should and would be found in the new world.

Even the scientific description of animals treated the creatures of antiquity as contemporary, authentic creatures. The scientific discourses of the time, natural history and cartography, documented animals from both classical texts and accounts of the modern-day explorations without distinguishing between the two. The ways we approach empirical evidence now in the twenty-first century, by questioning sources and evidence, were not the same in the seventeenth or eighteenth centuries. Zoologist Konrad Gesner did not doubt the validity of these fantastic creatures; they existed because, for the people of that era, they had always existed.

Unicorns, griffins, and hydras were more than just imaginary beasts for the early explorers and settlers. They inhabited the edges of the world and were verified by eyewitness accounts and, in the case of the hydra, by physical evidence. First-hand accounts and tangible samples "proved" the existence of the creatures.

The depiction of the griffin is a curious one. Looking up at the Spanish Conquistador, amidst the violence of the scene, the griffin by be allegorically representing the guardian of the gold. At the same time, since so many new creatures had been documented, in addition to those described in antiquity, it may very well be the case that the griffin, too, was thought to be real.