Altered States: An Exhibit of Books Broken, Censored, Marked Up, and Made Art 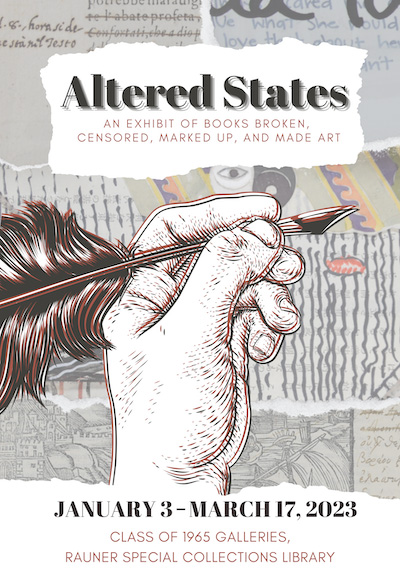 In an age of mechanical and digital reproduction, it is easy to think that books are static objects. But they are not: we alter them in myriad ways. We write in their margins, cut them up, censor them, throw them out, re-bind them, and create new art with them. Books do have their fates.

This exhibit was curated by Daniel Abosso, Subject Librarian (Baker-Berry Library), and installed by Lizzie Curran, Assistant Conservator (Baker-Berry Library). The poster was designed by Samantha Milnes, Collection Management Assistant (Rauner Special Collections Library). The exhibit will be on display in Rauner Special Collections Library's Class of 1965 Galleries from January 3, 2023, until March 17, 2023. You may download a pdf of the exhibit handlist here. A printable version of the poster can also be downloaded.

Lodovico Castelvetro (1505-1571) was an Italian humanist who had Protestant sympathies. He was excommunicated in 1560. Castelvetro’s complete works were placed on the Catholic Church’s Index Librorum Prohibitorum (List of Prohibited Books) beginning in 1590. The entry for his works in the Index reads: “All works of Lodovico Castelvetro [are prohibited] unless expurgated beforehand.”

This copy of Castelvetro’s translation and commentary on Aristotle’s Poetics has been expurgated. The expurgated text is still readable: the point of the censorship in the case of this book was to highlight what the censors found objectionable in the text.

Certain parts of books are more likely to be missing than others. Plates and maps can be detached for display, and first and last pages are often damaged or lost. Incomplete books don’t command the same price or prestige, so booksellers and owners often doctor defective copies.

The original last leaf in this book has been replaced with a facsimile. The facsimile isn’t evident from a casual glance, but a closer look reveals it: the paper is from a different paper stock than the rest of the book, it does not have the same kind of soiling as the opposite page, and on the other side of the last leaf (not visible), there is no impression from the type. If you look at the page on the left, you can see the impression on the paper that the type has made.

Samuel Johnson. A Dictionary of the English Language … Abstracted from the Folio Edition by the Author. London: I. Walker and others, 1825. Val 825 .J63 P712

Humble books, such as this abridgement of Samuel Johnson’s A Dictionary of the English Language published in 1825, can become collectors’ pieces when they are linked to someone famous. The bookseller’s description boldly declares it to be from Charles Dickens’ library:

“Inscribed in the autograph of Dickens on front end-leaf with his initials, and monogram, place of residence and date “Tavistock House, London, W.C., Christmas-Day 1854,” and eight other words in his autograph including the title of one of his works Great Expectations. The ‘C.D.’ and probably other words are evidently in a hand other than that of Dickens.”

The quotation on the bookplate of collector A. Edward Newton shows the appeal that such a copy has for collectors: “Sir the biographical part of literature is what I love most.”

For an account of how the forgery was detected, see: Jerome Meckier, “Dickens, Great Expectations, and the Dartmouth College Notes” in: Papers on Languages & Literature 28.2 (1992), 111-32.

Rare books have always been a tempting target for thieves. This book may have been stolen, since both the first and last leaves have been crudely torn in the same place on the page – perhaps to remove library stamps?

The ownership stamp seen here belongs to the bibliophile and rare book dealer Giuseppe Martini (1870-1944), Martini offered this copy for sale in 1901. In the same year he spent a few days in jail for stealing a book from a library...

This evangeliary (a book containing excerpts from the gospels used in the liturgy) shows the work of scribes writing hundreds of years apart. Parts of the text are crossed out, showing places where the liturgical use changed over time.

Margaret Bingham Stillwell. Gutenberg and the Catholicon of 1460: A Bibliographical essay ... Together with an Original Leaf of the Catholicon. New York: Edmond Byrne Hackett, The Brick Row Bookshop, Inc., 1936. Incunabula 122

Can’t find or afford a copy of a famous rare book? Then why not settle for a leaf (single page) from it? A leaf is much cheaper than a complete book. Books can be broken (disbound) and sold, leaf by leaf, to collectors and institutions. A quick search on eBay will show that there are plenty of leaves from rare books to be had.

Often (but by no means always!), books that are disbound were already missing pages. In the case of the Catholicon leaf displayed here, the bookseller uses this as justification for breaking it: “The book from which the leaves come is incomplete, lacking a considerable number of leaves and thus making distribution feasible…” To add a scholarly veneer to the whole endeavor, booksellers can commission an expert bibliographer to write an essay about the importance of the book from which the leaf has been taken.

Breaking books, even to make leaf books, is a controversial practice because it destroys a cultural artifact and the material evidence of its creation and use. In the 21st century, scholars have begun to search for and re-combine (digitally) scattered leaves.

This leaf from a Qur’an was sold by Otto F. Ege (1888-1951), a notorious book breaker who described himself as a “biblioclast,” or, destroyer of books. Ege broke manuscript and printed books to sell leaves to institutions and private collectors. He believed that the leaves, since they were much more affordable than complete books, would have a greater educational impact by being dispersed than by being kept in a single book in a single collection, accessible only to relatively few people.

For more information about the practice and ethics of book breaking, watch “The Biblioclasts: Is it Ever Ethical to Break a Book?”

These fragments are from a vellum manuscript from the 15th century that had been repurposed as a binding for a book in the 16th century. Bookbinders often used vellum manuscript waste from older books to bind new books rather than buy new vellum. A number of manuscript books survive only in fragments like these.

Artist Sally Agee has nearly completely transformed this Japanese book by cutting its pages, applying paint, fabric, and other materials to them. The original book is now a palimpsest – its text obscured by a new work.

Dr. George Margolis (d. 1996), Professor of Pathology at Dartmouth Medical School, interleaved his copy of Jacques Levy’s Cesar Chavez: Autobiography of La Causa (New York: Norton, 1975) with his observations on the Vietnam War, increasing the diversity of medical practitioners, and other social justice causes. As Margolis describes it:

“This collection – this journal of protest – began to take shape at the height of the Vietnam War and at the nadir of the struggle of the migrant farm workers for economic and social justice. It started with two letters to the New York Times addressing the impact of these historic currents upon our minorities.”

Kim Kardashian’s 2015 book, Selfish, a collection of selfies, has become Felice E. Tebbe’s Not Once: I Am Selfish (Kim Kardashian). Tebbe has written and marked over Kardashian’s book; some would consider this a new work, or, as the library catalog does, a joint work between Kardashian and Tebbe.