When Adam Delved & Eve Span: William Morris & the Politics of the Book 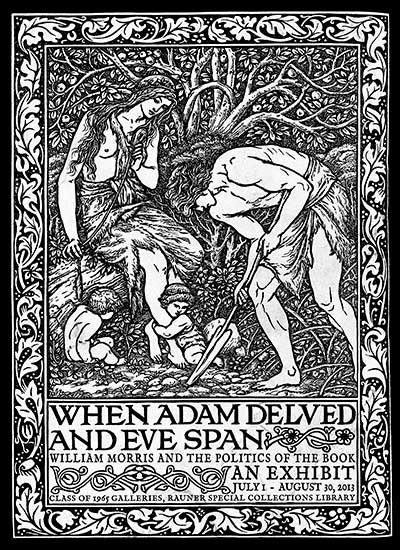 William Morris created a world of aesthetic rebellion. To him, the forces of modern industrial capital were destroying the products of noble labor and eroding the beauty of the human soul. Morris looked to an idealized past and imagined a socialist utopia devoted to the arts and crafts.

In his visions of this transformed world, Morris experimented in many areas of design. To most people, Morris is synonymous with late Victorian textiles, wallpapers, interior design -- even the Morris Chair -- but his ideals came most fully to fruition in the books he crafted. This exhibition looks at Morris’s socialist dreams as they played out in the realm of books -- those he wrote, those he loved, and those he printed.

The exhibition was curated by Laura Braunstein & Jay Satterfield and was on display in the Class of 1965 Galleries from July 1 - August 30, 2013.

You may download a small, 8x10 version of the poster: WilliamMorris.jpg. You may also download a PDF handlist of the items in this exhibition: WhenAdamDelved.

The rapid industrialization of Victorian England had many critics. William Morris was particularly offended by the triumph of commerce over aesthetics as a consequence of mass production. What was the alternative? For Morris, it was a return to what he saw as the primitive simplicity of the Middle Ages. His ideal of production, in which the individual talent is subsumed by collective creation, became manifest in his avocation as a printer, craftsman, and mentor to artisans. As he wrote in his lecture Gothic Architecture, the artist should aspire to “the freedom of hand and mind subordinated to the co-operative harmony which made the freedom possible.”

The Kelmscott Press was the most fruitful manifestation of Morris’s rejection of the modern industrial state. Morris hated the drab typography of late nineteenth-century commercial printing. Books, for Morris, had become shoddy commodities in a capitalist marketplace. Morris applied his romantic vision of the medieval craft guild to a small private press. Using the basic technologies developed by Gutenberg and his successors, he hired a team of artisans to set type of his own making, to execute woodcuts based on his designs and those of Edward Burne-Jones, and to print from a hand press on handmade paper. The results were stunning: Kelmscott Press issued some of the most beautifully printed books of the Victorian era. The Press’s output could never fulfill Morris’s socialist dreams—they were priced out of that class—but Kelmscott helped reintroduce typographic principles and fostered a movement that brought good design back to the mainstream.

Morris’s ideals of craft-based production failed to be realized when it came to their propagation. He nostalgically revived the medieval romance as the genre of the masses, but his works could only reach a broad audience through commercial publishing’s distribution networks. Many of the outrageously expensive fine press books produced by Kelmscott were also issued in cheap editions priced to sell, thus helping Morris to profit from the industrialized system that his writings and his life’s work aimed to critique.