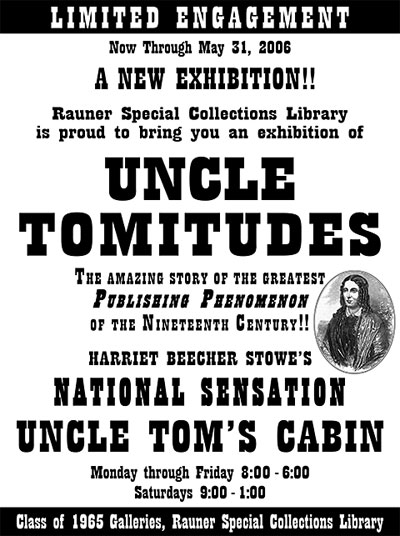 Harriet Beecher Stowe's Uncle Tom's Cabin shook up American culture in the 1850s. It sold more copies than any other novel of the 19th century and spurred a multitude of "Uncle Tomitudes," or spinoffs, such as theatrical adaptations, popular songs, and even "anti-Tom" novels that depicted slavery as a benign institution. This exhibition uses Dartmouth history as a context for understanding the deep intellectual and emotional tensions slavery created in America that led to Uncle Tom's Cabin's unprecedented success.

You may download a small, 8x10 version of the poster: Tomitudes_8x10.jpg (1 MB) You may also download a handlist of the items in this exhibition: Uncle_Tomitudes.pdf

Case 1. Uncle Tomitudes: The Story of a Book

In the past year, three different classes have come to Rauner Special Collections Library to discuss Harriet Beecher Stowe’s Uncle Tom’s Cabin. The novel is an excellent example of how exploring the book’s publishing history creates a deeper understanding of the novel’s phenomenal impact on American society. Uncle Tom’s Cabin was a two edged sword: it invigorated the abolitionist movement, exposed the horrors of the institution of slavery to a wide audience, and provided a passionate argument against slavery, but, at the same time, the novel infused racial stereotypes more deeply into American culture. Uncle Tom’s Cabin started as a serialized story in The National Era, an abolitionist newspaper, and became the most successful novel published in the 19th century. It sold over 300,000 copies in the United States, and an estimated 1.5 million copies in England in its first 14 months. In addition the novel spurred a multitude of spinoffs (popularly coined “Uncle Tomitudes”) such as theatrical adaptations, popular songs, and even “anti-Tom” novels that depicted slavery as either a benign or beneficial institution. Uncle Tom’s Cabin owes part of its success to innovations in printing technologies developed in the first half of the century that allowed for massive print runs to match the unprecedented demand. Multiple steam presses operated 24 hours a day using easily replicated stereotype plates. The publisher, J. P. Jewett, issued competing editions designed to exploit distinct market niches, from deluxe sets to cheap editions printed in narrow columns of type. He also used illustrations to appeal to different audiences. In one case, he featured the story of redemption through Christ to market a Christmas edition. Despite Jewett’s marketing savvy, over production cut into his profits: while the book sold extremely well for a year, it suffered from market saturation and Jewett was left holding an estimated 20,000 copies in warehouses for years.

Case 2. Uncle Tomitudes: Beyond the Book

Even if a person did not read Uncle Tom’s Cabin in 1852, he or she could hardly have escaped the story. It was adapted for the stage and became the most popular theatrical production of the century. Publisher J. P. Jewett commissioned John Greenleaf Whittier to write lyrics for a popular song based on the emotionally charged death of the character Little Eva. Dozens of other popular songs followed and sold briskly throughout the 1850s. The success of the novel also spurred “anti-Tom” novels such as William Smith’s Life at the South: or, “Uncle Tom’s Cabin” as it Is, and other attacks on the validity of Stowe’s characterization of slavery. Stowe fought back with her Key to Uncle Tom’s Cabinthat cited newspaper accounts of various atrocities fictionalized in the novel.

Slavery was an emotional and hotly debated topic on the Dartmouth campus. In an effort to maintain the Union, Dartmouth’s favorite son Daniel Webster delivered a key speech in support of the Fugitive Slave Law, an act that strengthened the mandate requiring northern states to aid in the capture and return of slaves fleeing southern states. Dartmouth President Nathan Lord was an outspoken supporter of slavery and repeatedly marshaled evidence from the Bible to argue for the validity of the institution. Other faculty, administrators and alumni were outspoken critics of slavery, including Salmon Chase who helped to found the Republican Party. Many Dartmouth students held views of slavery that were aligned with the abolitionist views prevalent in most New England states. A rally for the abolition of slavery was held in Hanover 1839, and later student publications ridiculed President Lord’s views.

One particularly vitriolic attack on Lord came as a mock advertisement in the student newspaper, The Dartmouth Oestrus, for a “slave auction” on the College Green. The chattel offered were none other than Nathan Lord’s wife, characterized as a “good breeder,” and his children. Ironically, it was under Lord’s administration that the College admitted many African-American students. Despite Lord’s support of slavery, Harriet Beecher Stowe sent her son, Henry Ellis, to Dartmouth in 1857. Tragically, he died while swimming in the Connecticut River during his freshman year.