Research At Rauner: From Inspiration to Publication 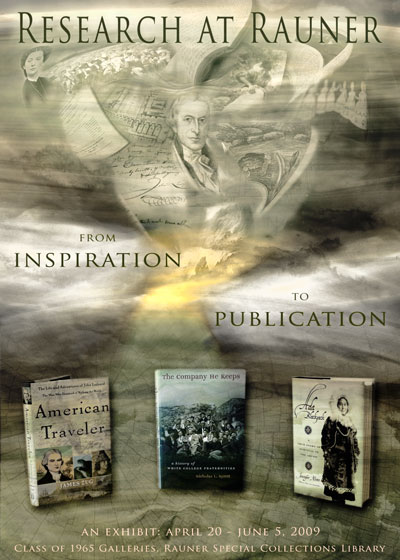 A student down below in the Reading Room today, working her way through an 18th-century letter or a box of manuscripts, struggling to complete her honors thesis or a paper due tomorrow, is likely to be focused on the assignment at hand. But ideas that emerge from research in primary sources tend to percolate and can reappear years later in more ambitious projects. Presented here are five recent books, each surrounded by their source materials, where authors found inspiration in the rich holdings of Rauner Library. The final printed books mask the work that went into each project. These scholars worked with Rauner staff to sift through thousands and thousands of documents to uncover untold histories. The key books and documents give only a glimpse of the long hours of research supporting each book.

The Dartmouth College Library’s Special Collections has always prided itself on being one of the friendliest places to conduct primary source research. We are determined to create an environment where every researcher, be it a world-renowned scholar or a student making a first foray into Special Collections, can engage in creative scholarship. Each year we open our doors to scholars from around the world, each pursuing his or her passion. We are pleased to present here some of the fruits of the scholarship that goes on here every day.

The exhibition was created by Sarah Hartwell and Jay Satterfield and was on display in the Class of 1965 Galleries from April 20 to June 5, 2009.

You may download a small, 8x10 version of the poster: Inspiration (2 MB). You may also download a handlist of the items in this exhibition: Research.

The Company He Keeps: A History of White College Fraternities by Nicholas Syrett

In the process of reviewing the fraternity files in Rauner Library, Nick Syrett stumbled upon a Dartmouth drama that unfolded in 1925 involving several fraternity members. Apparently, several of these young men had been invited to visit the Beaver Meadow Road home of two recent graduates. Once there, it was alleged, these students engaged in drinking and homosexual acts. Nick pursued the story and connected the activity at the Beaver Meadow house with the tendency for the men involved to play the parts of women in the all-male Dartmouth Players' theatrical productions.

He presented a talk on the scandal and later published an article on the topic, “The Boys of Beaver Meadow: A Homosexual Community at 1920s Dartmouth College,” in American Studies. Eventually he included this information in his dissertation, which has recently been published as The Company He Keeps.

American Traveler: The Life and Adventures of John Ledyard, the Man Who Dreamed of Walking around the World by James Zug ‘91

Over the years, countless researchers have delved into the holdings of Special Collections to try to tackle the topic of John Ledyard, 1776, and his epic travels, but few have managed to capture the enormity of his adventurous life. James Zug ’91 poured over Ledyard’s diaries and blunt correspondence with Dartmouth founder Eleazar Wheelock to capture the spirit of the Dartmouth alumnus who traveled with James Cook and dreamed of walking around the world.  His research was augmented by 19th-century popular accounts of Ledyard such as the one presented here, an 1831 publication designed to capture the imagination of America’s youth.

Ada Blackjack: A True Story of Survival in the Arctic by Jennifer Niven

In 1921, famed Arctic explorer and popular lecturer Vilhjalmur Stefansson sponsored a group consisting of three Americans, one Canadian, and one Inuit to establish a settlement on the uninhabited Wrangel Island to test his theory of the “Friendly Arctic.” Stefansson believed that by adapting to the environment, people could live off of the land in a hospitable Arctic. The expedition ended tragically with the death of four in the party. The only survivor was the hired native seamstress, Ada Blackjack. Blackjack’s matter-of-fact, yet harrowing 1923 diary from the expedition’s final months is a centerpiece of the Stefansson Collection. Jennifer Niven drew on Ada Blackjack’s diary as well as Stefansson’s voluminous correspondence files on the Wrangel Island Expedition to trace the extraordinary story of death and survival.

You might not expect the topic of 19th-century women’s education would be well served by the Ivy League’s last bastion of all-male education, but Rauner curators quickly responded to changing emphasis in the curriculum. A focus for collecting over the past 30 years has been New England women writers. Mary Kelley, formerly of the History department, worked with her students to explore these collections. Her 2006 book, Learning to Stand & Speak, drew on the Harriet Burleigh Janes papers to better understand the role of writing in women’s lives. The same collection inspired a Master of Arts in Liberal Studies thesis from one of her students.

What started as a class assignment evolved into a master’s thesis and website, and has now fully matured as a detailed guide to the Dartmouth campus. Scott Meacham ’95 enrolled in Jack Wilson’s Architecture 1 class while a student. Each member of the class investigated the history and character of a building or space on campus. Meacham continued to work on ideas born in that class as a graduate student in architecture at the University of Virginia. He then mounted “Dartmo,” a compressive website devoted to the Dartmouth campus.  This past year he completed the Dartmouth College campus guide prepared for the College—a source that has become the starting point for a new generation of Architecture 1 students as they begin their investigations into campus spaces.