“Power, Honor and Authority,” Samson Occom and the Founding of Dartmouth College 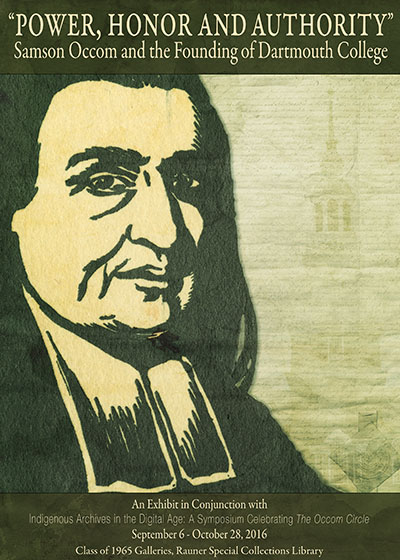 As Dartmouth approaches the 250th anniversary of its founding, many of us are reflecting on the institution’s history. The idea that Dartmouth was founded as an “Indian School” prevails today as a dominant narrative among many members of the public as well as those associated with the College.

The truth behind the College’s founding is far more complex. Eleazar Wheelock’s original stated intention was to open a school to convert Native Americans to Christianity. His reasons were primarily because he literally feared for their souls, but also because he thought this mission would address the conflicts between European Americans and Native Americans. He eventually abandoned this goal in a pragmatic pursuit of financial gain and prestige. Central to this story is the life of Samson Occom, the first Native American who Wheelock trained into the ministry. This exhibit explores Occom’s role in the founding of Dartmouth College, and the documentary history of Wheelock’s changing intentions.

In winter 1766, Occom and Nathaniel Whitaker journeyed to Great Britain to raise funds for Moor’s Indian Charity School. George Whitefield, a founding minister of Methodism who influenced religious revivalism in the American colonies, hosted Occom and Whitaker at his London church. Whitefield later introduced them to William Legge, 2nd Earl of Dartmouth, who became a major contributor to the project. In total, Occom spent two years traveling throughout Great Britain, preaching to rapt audiences and raising £12,000 -- equivalent to approximately $2.4 million today. He was notable enough to receive an invitation to George III’s robing ceremony and his preaching was even parodied on the London stage. His return to the colonies, however, precipitated his break with Wheelock. He discovered that his family had been neglected, and that Wheelock planned to move his school to the New Hampshire frontier.

While Occom was in England raising funds for Moor’s Indian Charity School, Wheelock was in Connecticut attempting to establish the school’s charter. At first, Wheelock was stymied because the colony of Connecticut was itself incorporated. Under English law at the time, one corporation could not charter another. Because of this Wheelock began to look further afield. He considered sites in New York, Massachusetts, and New Hampshire. As his efforts progressed, his vision became something grander. Whether it was Wheelock’s idea or someone else’s carefully placed suggestion is unclear, but the idea of founding a college first appears in his correspondence around 1768. Ultimately, Wheelock settled on New Hampshire as the site of his new endeavor. The colony’s new Governor, John Wentworth, was willing to provide him with land and a charter. However, this decision flew in the face of his stated intentions.

Exhibit Case 3: A Life of Service

Samson Occom was born in Mohegan in the colony of Connecticut around 1723. His adolescence coincided with the Second Great Awakening, a time of renewed religious fervor in the American Colonies and elsewhere. Swept up in this movement and wishing to support his people, Occom sought an education from Eleazar Wheelock, a local minister. Occom excelled at his studies, persuading Wheelock of the potential for education to Christianize the Indians. Occom went on to become a minister himself, and was later sent to Great Britain by Wheelock to raise money for Wheelock’s school. Following his trip, Occom fell out with Wheelock over the school’s neglected mission of Indian education, among other issues. However, Occom’s faith was undaunted; he continued to preach and was known for his clear and direct style. A sermon he preached at the execution of Moses Paul became so well known that it was reprinted and translated well into the nineteenth century. Following the Revolutionary War, Occom, disillusioned with European-American Christian society, led an exodus of Christian Indians to Oneida country in upstate New York, where they founded the Brothertown tribe. Occom died in Brothertown in 1792.