The Poet Present: In Robert Frost’s Hand and Voice

Rauner Library is privileged to provide access to one of the largest collections of Robert Frost materials in the world. Frost, who enrolled at Dartmouth in the Fall of 1892, dropped out before completing his first term. But he maintained a deep fondness for Dartmouth, and returned often: from 1942 to 1947, he was the George Ticknor Fellow in the Humanities and he repeatedly gave lectures and readings until his death in 1963.

Frost’s papers are among the most heavily used manuscripts in the Dartmouth College Library. Literary critics, biographers, and editors have all explored the collection in recent years, as well as novelists, poets, musicians and students looking for inspiration.

Robert Frost is as relevant today as he was fifty years ago.  A spate of recent scholarship is bringing to light unpublished writings and lectures from Rauner Library’s vast holdings of Frost materials.  Scrupulous transcriptions of Frost’s notebooks and one of his Dartmouth lectures have been published in the past two years, and there is an ambitious ongoing project to publish from his voluminous correspondence files.  In conjunction with this year’s VERMONT READS selection of Natalie Bober’s A Restless Spirit: The Story of Robert Frost, Rauner Library is pleased to present an exhibition of the manuscripts and recordings that have made this research possible and keep the poet present in our lives.

The exhibition was curated by Jay Satterfield and was on display in the Class of 1965 Galleries from June 7 to August 15, 2008.

You may download a small, 8x10 version of the poster: Frost (2 MB). You may also download a handlist of the items in this exhibition: Poet. 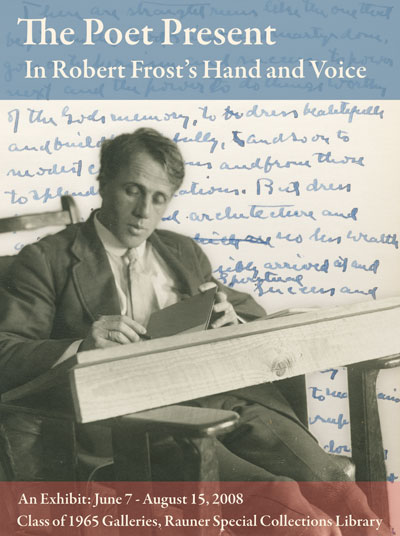 Case 1. Frost in the Classroom

In the Winter 2008 issue of Literary Imagination, James Sitar ’01 published the first of a series of transcripts of lectures given by Robert Frost at Dartmouth College. Frost was a popular figure on campus and gave frequent lectures, often for the Great Issues course, or as the George Ticknor Humanities Fellow. The lectures were recorded, but had not been published. The project is ongoing and we should see other Frost lectures appearing for the first time in the near future.

In the Fall of 1947, Frost taught a seminar to a small group of students (enrollment was capped at 12), so the public lecture transcribed here by Sitar offered the rest of campus, including the Great Issues class, an opportunity to “to hear the good talk of America’s foremost poet reading from his own work.”

Rauner Library holds a large collection of Robert Frost’s correspondence files. The files, made up predominantly of his incoming correspondence, show the poet at work and expose Frost’s complex working networks. One series of letters detail the complicated relationship Robert Frost kept with fellow poet Ezra Pound over a 45 year period. Frost first met Pound in 1912 in London. Despite bitter exchanges in the 1930s, Frost went on to spearhead a campaign to have Pound released from St. Elizabeth’s Hospital where Pound had been committed following charges of treason for his pro-fascist activities during the Second World War.

Frost’s files also document key friendships that shaped his life and work. His correspondence with Sidney Cox begins when Cox was a young English professor in Plymouth and follows Cox on to Dartmouth where he taught for over 20 years.

Already widely celebrated, Frost vaulted to new fame when he recited a poem at John F. Kennedy’s inauguration in 1961. The extent of his renown in American culture is manifest in a series of poems and birthday wishes sent to him by the fifth grade class at David Crockett School in Dallas, Texas.

Robert Faggen is currently working with Harvard University Press on a project to bring out the complete letters of Robert Frost. A massive undertaking that will take years to complete, the project will bring together disparate collections of Frost’s correspondence and create a fresh portrait of the poet.

Robert Frost nearly always carried a notebook to jot down ideas and impressions as he moved through his day. Most of the surviving notebooks are part of the collections here at Rauner Library. Recently, Robert Faggen undertook the weighty task of transcribing and editing these notebooks. The notebooks are not journals or diaries, but spaces for experimentation and the fragments produced by the poet’s mind at work. As Faggen states:

The notebooks allow us to see Frost at work on all aspects of his role as writer—as teacher, lecturer, essayist, and poet. They often reveal the larger scope of preoccupations only mentioned or obliquely suggested in the poems, and they survive as the remains of a chaotic laboratory in which many of his inventions went through constant experimentation and trial.

The transcriptions allow the reader to cut through the difficult task of deciphering Frost’s hand and offer new insights into his working process, illuminate sources for poems, and bring to light his private musings.