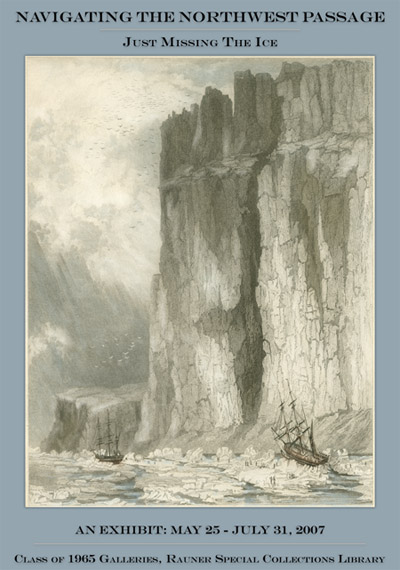 The 19th century's quest for an Arctic Northwest Passage set the stage for men challenging the icy North Seas. Today, this epic still gives us insights into relationships of society to nature in a world that we are rapidly changing as the global temperatures are rising. Ice barriers are retreating and the Northwest Passage will be open to commercial shipping and resource exploitation. Drawing on the rich Stefansson Collection on Polar Exploration, this exhibition maps the quest for the "Arctic Grail."

The exhibition was curated by Ross Virginia, Tiffany Chang '09, and Nicole Stuckenberger and will be on display in the Class of 1965 Galleries in Rauner Library from May 25 to July 31, 2007.

You may download a small, 8x10 version of the poster: Northwest.jpg (2.5 MB) You may also download a handlist of the items in this exhibition: Northwest Passage.

If you could gain fame exploring the Unknown and discover a dramatically shorter shipping route from Europe to Asia, what would you risk? And so begins the quest for a Northwest Passage -- an epic saga capturing human imaginations for over three centuries. It set the stage for men challenging the icy North Seas with the best but often ill-adapted technology of their day. Today, this epic still gives us insights into relationships between society and nature in a world that we are rapidly changing.

Global warming opens an unanticipated chapter in the story of the Northwest Passage as our familiar world melts into a new Unknown. As the global temperatures are rising, ice barriers that had so often proven to be fatal obstacles to early maritime expeditions are retreating. On a timescale of decades, the Northwest Passage will be open to commercial shipping and resource exploitation. However, as icy barriers become less of an impediment to action, new issues merge. Present concerns involve geopoliticial debate on access control and resource exploitation, and environmental threats to northern communities and their lands.

Immerse yourself in a few chapters of this epic tale, which is now yours, too. While early explorers were thankful to 'miss the ice' -- will we?

The Northwest Passage is a sea route connecting the Atlantic and Pacific Oceans through the Arctic Archipelago of Canada. It is about 4,000 nautical miles, or or third of the overall distance, shorter than the Panama Canal route connecting Europe and the eastern American coasts with Asia.

Early exploration of the ice-bound legendary Northwest Passage marked a thrilling period of discovery that was driven in part by the idea of taming the Arctic. Seafarers like William Edward Parry seized the opportunity to experience places and sights not previously traveled by Europeans. The explorers often showed stubbornness and ill-advised pride by not giving up European ways, such as of woolen clothing and military uniform, in the face of a much more demanding Arctic climate. The costs of human suffering, material loss, and loss of lives turned these journeys into heroic and often tragic epics.

Parry almost reached the 113th meridian and qualified for a £5,000 prize offered by the Board of Longitude to the first vessel that crossed the 110th meridian in high northern latitudes.

In 1821, his ships, the Hecla and the Griper, got caught in the ice and they became the first ships of the Royal Navy to winter in the Canadian Arctic. To keep their sanity, the men exercised by playing cricket on the ice and by running around the canvas-roofed deck to music from the ship's organ. Also, beer was brewed, a weekly newspaper was published, and the crew enjoyed comic theatrical performances each fortnight.

During that winter, the crew made the acquaintance of a group of Inuit. They told Parry of a strait that led to a sea in the west. He never found the strait, but he brought home new knowledge of Arctic lands and Inuit way of life.

Sir John Franklin was selected to lead a Naval expedition to uncover the remaining unknown parts of the Northwest Passage. His two ships, Erebus and the Terror, departed from England in May of 1845. They were stacked with pickled potatoes, pemmican, and a relatively new invention, canned meat (later discovered to be lethally poisoned with lead dissolving from the soldering of the cans). He reached Lancaster Sound, the gateway to Barrow's Straits, in August of that year, and was never seen again by Europeans.

The disappearance of Sir John Franklin (1786-1847) opened a new chapter of the Northwest Passage saga. Now, explorers had a humanitarian, practical, and pressing reason to escalate the page of Arctic exploration. In subsequent years, many ships sailed out of England with the purpose of finding and rescuing Franklin and his crew. As a result, knowledge of the Northwest Passage increased significantly, though little information about the missing Franklin expedition was ever recovered.

The end of the Franklin expeditions marked a turning point in the history of Arctic exploration. And age of remarkable discovery amidst devastating loss had come to a close, and new visions of the Arctic emerged. Stefansson, criticizing his predecessors for their ignorance of "Arctic Reality", effectively communicated to the public that the time for a more pragmatic view had arrived. In The Friendly Arctic (1921) he described the Arctic as a productive land as demonstrated by its indigenous population, the Inuit. While he emphasized the value of their traditional knowledge for everyone endeavoring to live in the Arctic, he also believed the Inuit did not make optimal use of their land by exploring the riches of unknown areas.

To Stefansson, the Arctic was not remote, and he emphasized its importance to the regions south, not the least because of its tremendous commercial potential. Among his many and sometimes controversial initiatives, Stefansson returned to the idea that the Northwest Passage could become a viable economic waterway using the information and technology then available. Beginning in  1932, Stefansson began mapping flight routes for Pan American Airlines and he worked on Charles Lindbergh's plan for a transatlantic flight. He also aided in the development of Alaska and northwestern Canada, particularly in oil prospecting and mapping of the Alaska Highway. Stefansson, in many respects, brought the Arctic closer to the modern world than ever. While he envisioned much of today's developments in the Arctic, what he could not foresee was that the Arctic environment itself would soon be drastically changing.