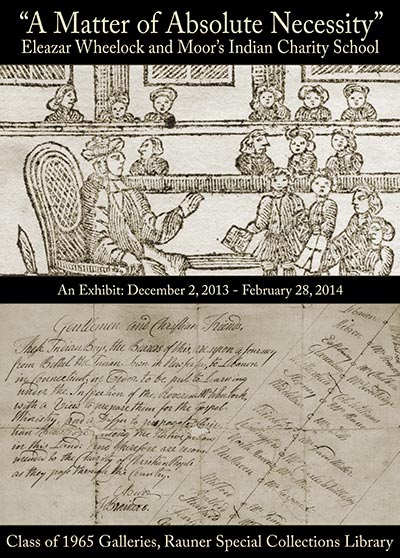 Of the many programs designed to educate Native Americans in the colonial period, Moor’s Indian Charity School, founded by Eleazar Wheelock in 1754, was the most ambitious. Moor’s was large, well organized and publicized. It was also founded on the premise that Indians would make better missionaries than their Anglo counterparts. This exhibit examines Wheelock’s educational philosophy, the daily life of Indian students at Moor’s Charity school, including the hardships students faced adapting to the English way of life, as well as the little-discussed experience of the women students at the school. The exhibit also explores the outcomes of Wheelock’s educational experiment, from successes like Samson Occom to the “failures” of those who returned to an indigenous life styles.

The exhibition, curated by Shermaine Waugh with assistance from Peter Carini and Barbara Kreiger, was be on display in the Class of 1965 Galleries from December 2, 2013 to February 28, 2014.

Of the many programs designed to educate Native Americans in the colonial period, Moor’s Indian Charity School, founded by Eleazar Wheelock in 1754, was the most ambitious. Moor’s was well organized, large, and well-publicized. It was also founded on the premise Indians would make better missionaries than their Anglo counterparts in part because Indian missionaries could be supported for half the cost of English missionaries; they spoke the Indian languages; and they were accustomed to Indian lifestyles.

Moor’s grew out of Wheelock’s experience tutoring his first student, a Mohegan named Samson Occom, but Wheelock largely felt the plan was divinely inspired.. Located in Lebanon Connecticut the school was named for its chief benefactor, Joshua Moor, who donated a house and two acres of land. Like other schools of its kind the Indian boys who attended the Charity school were separated from their native culture. Unlike other schools they were given a classical education that included, in addition to bible studies the study of Latin and Greek. Indian girls also received schooling, but attended academic classes only one day a week. Their other training focused the household arts they would need to support the Christian brethren.

By 1768 about 50 students had studied at the school and 15 returned to their homes as missionaries, schoolmasters, or assistants to non-Indian Ministers. When Eleazar Wheelock realized that his plan of sending missionaries to Indian homelands to educate and convert Indians was not working as he desired, he began to move in a new directions. In 1769, he received a charter for a new school, which would be named for William, second Earl of Dartmouth. Wheelock would later be appointed Dartmouth College’s first president. Moor’s, relocated to Hanover New Hampshire, continued on as a sort of feeder school for Dartmouth, educating both Indian and English students who were not prepared to take on College level studies.

Although one of Eleazar Wheelock’s main goals was to use the Indian students to spread the gospel, the majority of the Indian students did not live up to these expectations and made no lasting evangelistic mark. In 1765, a total of eleven students graduated from the Charity school with three Indian boys becoming schoolmasters to the Iroquois and six serving as teaching assistants. Letters from students to Wheelock often depict the trials that the students faced and their recurrent struggles with alcohol, illnesses and adapting to the English way of life. Even Wheelock himself, at times found himself exhausted and frustrated not only with the troubles the students had acclimating and grasping the English language, but also with what seems like a perpetual lack of funding for the school. However, publically, Wheelock remained encouraged that his work would bring “something great” for the Indian students.

While the majority of the Indian students educated at Moor’s Charity school were male, Indian girls also received schooling. They attended academic classes one day a week, and the rest of their time was delegated to non-Indian households where they worked as servants. Students at Moor’s followed a strict schedule: Classes began at 9, ran until 12, and then again from 2 until 5. On Sundays, students attended church in the morning and the evening. The Indian boys began each day with prayer and catechism before dawn followed by formal instruction in Greek and Latin. The Indian boys were also required to work on the school’s farm for half a day, a task classified as “husbandry.” As illustrated in a letter from an Indian student’s (John Daniel) father, most of the Indian students and their parents showed little interest in farm chores.

Wheelock’s main goal for the Indian students at Moor’s was to solve the “problem of the Indians” and lead them from a “savage” life of “hunting and rambling” by making them into “good, wholesome members of society.” This, he posited, would solve the difference between colonists and the Indians and result in a more productive and peaceful existence for both. He felt that the way to accomplish this goal was through dutiful study of classical literature and Christian gospel.

Moor’s was set up for two different levels of schooling – a Latin school and an English school. At the English school, the students learned to read, write and do arithmetic. After completing English School, students began Latin School, where they learned to read and write Latin, Greek, and some Hebrew. The English School was reserved for Indian students while both white and Indian students attended the Latin School. Wheelock believed that by providing the Indians with this classical instruction, he would lay the foundation for a profession in ministry. The idea was to remove a child from the Indian environment as soon as possible and bring them up in English culture before Indian “savagery” had time to set in.