Limits to Power: Daniel Webster and the Dartmouth College Case 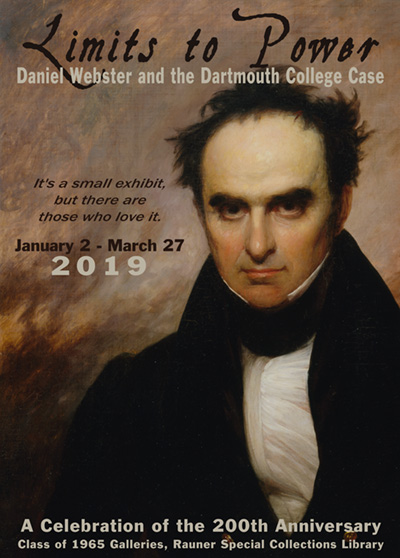 The Trustees of Dartmouth College v. Woodward, better known as the Dartmouth College case, is a critical turning point in Dartmouth’s history. Had this case been settled in favor of Woodward, and by extension, the State of New Hampshire, Dartmouth as we know it would not exist today.

The case was also a turning point for our country. The outcome of the Dartmouth College case cemented the concept into United States Constitutional law, already present in English common law, that private charitable organizations serve the public good.

In addition, the case is one of several that is still cited today as the basis for the protection of corporate persons under the Constitution. Justice John Marshall’s opinion in this case has been cited by the dissent in recent Supreme Court cases such as Burwell v. Hobby Lobby and Citizens United v. FEC.

This case also solidified Daniel Webster’s, Class of 1801, already significant reputation as a constitutional lawyer. Webster was only 37 years old at the time, and his oratorical style, persuasive argument, and keen sense of strategy vaulted him to fame. Webster would go on to argue some 170 cases before the Supreme Court during his lifetime, but none are as well-known as this one.

While the emotional pull of his peroration, and the often-quoted line from it “It is, Sir, as I have said, a small college. And yet there are those who love it!” is the focus within the College community, it was his strategic decision to argue the case of corporate personhood based on English common law that won the day. Chief Justice Marshall had used this argument himself several times, both as a lawyer and in judicial opinions. It is likely that Webster was aware of this and made a conscious decision to cast his argument in a light that would appeal to the justices and to Marshall in particular.*

We invite you to enjoy this exhibit which lays out the narrative of the Dartmouth College Case. It was curated by Peter Carini, the College Archivist, and will be on display in the Class of 1965 Galleries from January 2nd through March 27th, 2019.

You may download a small, 8x10 version of the poster: LimitstoPower.jpg You may also download a handlist of the items in this exhibition: limits_to_power_handlist.pdf.

It was a dispute over who would preside as minister of the Old White Church that precipitated the quarrel between John Wheelock and the Board of Trustees. The problems began in 1804 when a majority of the local church members wanted to replace John Smith, a staunch supporter of John Wheelock, with the new Professor of Theology, Roswell Shurtleff, as their pastor. The Board tried to appease both sides, but in 1811, Wheelock charged the Board with misappropriating funds by allowing Professor Shurtleff to spend time preaching at the local church.

Professor Shurtleff’s “religious fervor” was what initially caused a split in the congregation, many of whom preferred him over the stuffier Professor Smith. This in turn led John Wheelock to advocate against him, ending in a rift with the Board.

The “Anonymously” published pamphlet, later attributed to John Wheelock, that set out claims against the Trustees of the College, include charging them with misappropriation of funds and of being a threat to the government and democracy.

Parish writes to Wheelock saying that the Sketches are published, but he is worried that they are “too hot.” This is one of several letters that prove that the Sketches were written by Wheelock in consultation with Parish, a man who Wheelock put forward for a professorship, but the Trustees declined to hire.

The Trustees’ answer to John Wheelock’s accusations made in the Sketches. Pamphlet wars like this were a common occurrence in the 18th and 19th centuries. They were used similarly to how Twitter is used today, but with no word limit! In fact, these two pamphlets spawned a number of other responses in pamphlet form from supporters of both parties.

News clippings from the Concord Gazette, the New Hampshire Sentinel and the Dartmouth Oracle showing how widely publicized the rift between the Board and the president became.

A Second draft of the letter John wrote to the Trustees claiming that they could not put him on trial or remove him from office.

Not one to take a minor setback lying down, John Wheelock appealed to the Republican Party to help him retain his position as president of the College. The newly elected governor of New Hampshire, William Plumer, was more than happy to oblige since the Board was made up primarily of staunch Federalists. This article transcribes the act passed by Plumer, which increased the size of the Board and thus the State’s control of the College and changed its name to Dartmouth University. Francis Brown, Class of 1805, a minister from Yarmouth, Maine, became the third president of Dartmouth College when the Trustees asked him to take on the position following their 8-2 vote to remove John Wheelock from office. Brown was instrumental in getting Daniel Webster to take on the case for the College.

Charles Marsh, Class of 1786, Board member, Vermont lawyer and Congressman, writing to Francis Brown, President of the College, urging Brown and the Board to “resist” the act passed by Governor Plumer by taking legal action.

In August of 1816, the University Trustees attempted to hold their first meeting, but they were unable to produce a quorum. Through a technical detail this prevented the University Board from meeting and allowed the College Board to continue to conduct business. They quickly moved to dismiss William Woodard, Secretary of the Board and Treasurer of the College. They also demanded that Woodward return the Trustee meetings minutes, the original charter, the seal and the accounts of the College. Woodward’s refusal laid the ground for the lawsuit that was initiated on February 8, 1817.

The College Trustees respond to the charges brought by the University Board Committee that they do not think the 1816 Act, in which the State took over the College, is legal, and they are waiting to hear the decision from the Superior Court. Their case against the Act was immediately transferred from the Court of Common Pleas to the Superior Court of New Hampshire because William Woodward was a judge on the lower court.

John Wheelock, having set the legal wheels in motion, died before the New Hampshire case could be decided. This extract of his will details the property he left to Dartmouth University.

William Allen, John’s son-in-law and the son of Ethan Allen, took over as President of Dartmouth University after John Wheelock’s death.

Writing to President Brown, Daniel Webster declines an invitation to give an oration as part of the New Hampshire case. Webster would later reconsider and although Jeremiah Mason and Jeremiah Smith were the primary representatives for the College, Webster ended up speaking before the Superior Court for about an hour.

Brief and notes prepared by Jeremiah Mason for the New Hampshire court case.

Although there is no record of Webster’s hour-long oration, judging from his notes it appears that he focused primarily on the scope of the legislative powers and how the Contracts Clause of the United States Constitution related to the case.

Engraving of Daniel Webster by John Angel Joseph Wilcox, made from an original painting by Joseph Ames.

Nine days after the New Hampshire court decided the case against the College, Daniel Webster wrote to President Brown offering to help the College with the case before the Supreme Court and engaging Joseph Hopkinson as co-counsel.

The University hired John Holmes, a Massachusetts Congressman with a reputation for vitriolic political debate, to represent them. Holmes was of the opinion that Webster would stick to the constitutional issue and not approach the argument more broadly. At the urging of concerned supporters, William Allen, the President of the University, hired William Wirt as co-counsel. Wirt believed that Webster would take on the full range of arguments. But, Wirt was plagued by ill health, and his role as United States Attorney General did not leave him much time to press this argument.

Webster writes to President Francis Brown to tell him that rather than focus on the Constitutional questions, “We shall endeavor to argue on all the points.” This would turn out to be an important and key strategy to the outcome of the case as the University’s counsel settled on addressing only the narrow constitutional question related to contract law enshrined in Article I, section 10, clause 1. which prohibits a state from passing any law that “impairs the obligation of contracts”

Copy of the brief filed by Webster with the Supreme Court.

Daniel Webster’s notes that he spoke from during his approximately four hours before the Supreme Court as well as his report from which the final published report of his arguments was made. Webster took a two-pronged approach to his argument, first pointing to English common law to define the Trustees’ rights under the concept of corporate personhood as a charitable body and then to focus the constitutional question related to contracts.

Salma Hale, a supporter of the University, writes that Webster’s argument “made no little impression.” Mentions that Wirt will close the argument the next day followed by Hopkinson. He notes that the employment of Mr. Wirt seems to be a better idea every day; a vailed reference to the fact that many in audience felt that Holmes had missed the mark by focusing solely on the constitutional question.

Ripley writes to William Allen, President of the University, that Webster bested them with his argument in court. It is clear from this letter and Hale’s letter that the handwriting was on the wall.