Ledyard Canoe Club: A History of Exploration and Adventure 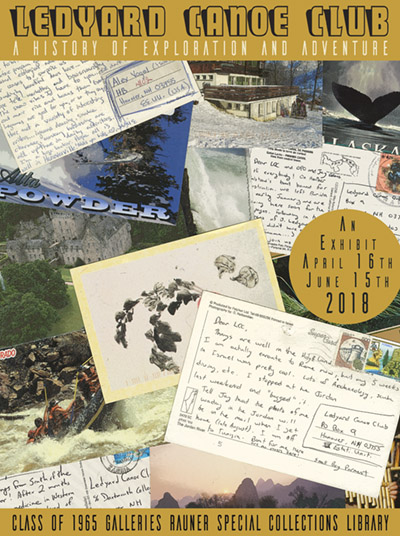 "Ledyard has a sense of place. It is a setting, a land and waterscape, a cast of mind perhaps, a legacy for sure, passed on from one generation to another.” –Jay Evans ‘49

In January of 1920, a group of Dartmouth students gathered together with the goal of restoring a rowing team to the college. They proceeded to procure pledges of financial support from various interested alums, and by March they had come up with a sufficient sum to get started. However, the College Trustees rejected the students’ proposal, and their plans were halted. Fortunately, these students refused to give up, determined as they were to take advantage of their proximity to the Connecticut River.

And so, in April of 1920, they founded Ledyard Canoe Club. The new club chose John Ledyard for their namesake, a man who, in his first year as a Dartmouth student, grew tired of his studies, felled a pine tree, dug out a canoe, and set off down the Connecticut to become an explorer. By 1921, their second year in existence, the new organization had already retraced Ledyard’s trip to the sea, a tradition that continues today. Quickly, the little club had become a strong community that inspired students to challenge themselves. Imbued with John Ledyard’s adventurous spirit, Ledyard Canoe Club has motivated canoeing and kayaking expeditions around the world. Yet, no matter how far they travel, Ledyardites return to their little home on the Connecticut to encourage the next generation of Dartmouth paddlers.

When the College Trustees refused to support the creation of a rowing team, the founders of Ledyard Canoe Club decided to create an independent organization. As a result, the club was originally established as an incorporated non-profit organization. They owned their small boathouse, which stood near the Ledyard Bridge; a few canoes, which they predominantly used for whitewater trips; and they built a cabin on an island a few miles north of the boathouse, which they used for social events and named after their first financial backer, Rev. John E.  Johnson ’66. The club remained independent until the Second World War, when they briefly turned over their assets to the College for safekeeping. They did not dissolve their corporate status, however, until 1977, when the club’s directorate decided it would be beneficial to become an official College organization. Even though Ledyard is now college-affiliated, student autonomy, leadership and responsibility still remain important values to the club today.

Part I: Competition and Racing

Since their very first year as an organization, Ledyardites have been challenging themselves, paddling the whitewater near Dartmouth before the Connecticut River was dammed, including 15 Miles Falls, a series of rapids upstream from Hanover on the Connecticut River before they were flooded by dams. However, it was not until much later in the club’s existence, in the 1960s, that Ledyard paddlers began competing officially. Once they did, they never looked back. In the 60s and 70s, Ledyard had an impressive racing program, centered around indoor pool training, so competitors could practice year round. Although organized racing has since dwindled, Ledyard still supports individual competitors and hosts two whitewater races, the Wells River Rumble and the Mascoma Slalom, each spring during Riverfest.

The club’s expeditionary tradition began far before its racing days, with the first Trip to the Sea in 1921, and took off from there with a number of trips across New England and into Canada. In 1964, the Danube expedition was the first trip to take Ledyard overseas. In a letter to the club, one of the founders, William Fowler ’21, wrote that “it was heartening to hear and see the illustrated account of the Club's outstanding voyage down the Danube last summer and to know that the Ledyard Canoe Club still paddles on.” Since then, Ledyard has inspired countless more trips: to Japan, Bhutan, China, Korea, the Czech Republic, and Ecuador, to name a few.

Ledyard has always built a strong sense of community. Today it is a thriving and vibrant club, not only because of the exciting trips that Ledyard encourages but also for the friendships that Ledyard fosters. Interested students without any technical skills can now come to Ledyard and learn how to paddle or simply participate in its social community. However, in the early days, Ledyard hopefuls had to complete physical tests of swimming, strength, and paddling to be considered for membership (in addition to paying a membership fee). Current members would then elect new Ledyardites to the club, their numbers based on the number of boats the club owned. Thankfully, this is no longer the case; club membership is open to all interested students. Ledyard has evolved and improved over its almost 100 years, while preserving its adventurous spirit and deeply connected community.