How the Experts Build a Snowman 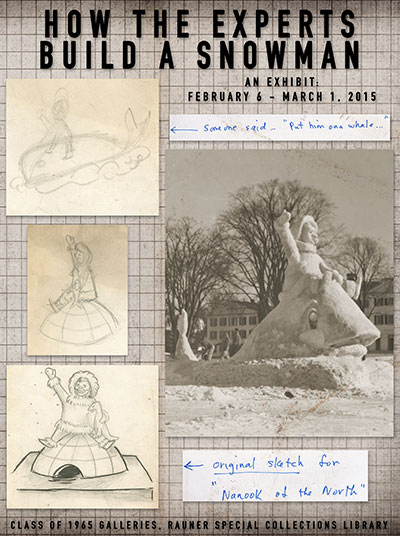 In 1951, Popular Science featured Dartmouth students under the headline “How the Experts Build a Snow Man.” Since the 1920s, snow sculptures on the Green have served as focal points for Winter Carnival. Each year Dartmouth students have puzzled, schemed, designed and built wondrous sculptures. They vary from the absurd to the sublime. There are feats of engineering that leave you awed, whimsy that makes you laugh, special effects to thrill, and even a Guinness World Record. This exhibit looks at some our favorite “Center of the Green” snow sculptures from 1924 to 1987 to celebrate the artistry and expertise of Dartmouth’s snowman builders.

The exhibit was curated by Barbara Krieger and Jay Satterfield and was on display in the Class of 1965 Galleries February 6 - March 1, 2015.

You may download a small, 8x10 version of the poster: HowTheExpertsBuildASnowman.jpg

To see images of the various snow sculptures, come to Rauner and ask for the "Snow" photo file.

1924: First carnival sculpture to be built on the Green

1930: Tower of ice / When completed it stood taller than its framing

1939: Eleazar Wheelock, again, looking less presidential than in 1932. / Designed by Dick Brooks, ’40, the sculpture was estimated to weigh 40 tons.

1941: Heyerdahl / Designed by Charles Weisker ’41, and, at 40 feet, the tallest sculpture constructed to that time

1949: Stiefelmannchen (Little man in a boot)

1951: Alpendoodler / The construction of this sculpture, with its long alpenhorn, inspired an article in Popular Science.

1969: In the Land of Fire and Ice / The dragon had a gas line installed so it could actually breathe fire.

1980: The 1980 Dartmouth Games: Winter Takes All / A snow gun was brought in from Killington to make snow on the green for the sculpture.

1987: Blizzard on Bourbon Street / The height of Dartmouth’s snowman broke the Guinness World Record, and an enterprising person sold pieces of it on Main Street during Carnival.