Frontier Fantasies: Imagining the American West in the Dime Novel 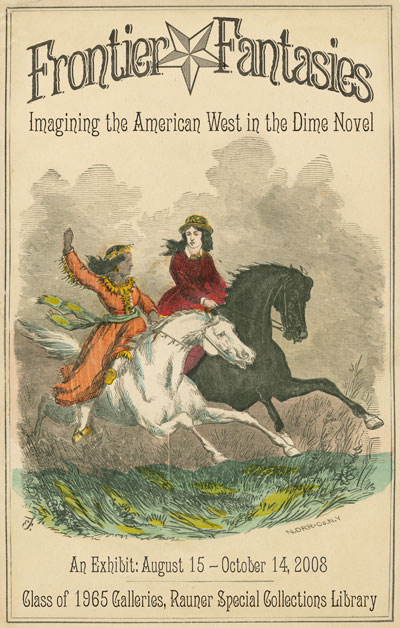 Enormously popular and critically maligned, the dime novel was one of the first forms of mass culture in the United States. The Western adventure story dominated the dime novel industry in the 1860s and 1870s. Tales of the frontier, wherever it was – upstate New York, the Great Plains, or the California gold country – helped to define a mythical American identity. Come see these “Books for the Million!” that justified Western expansion with mail-order myths of violent transgressions, passionate romances, and thrilling rescues.

The exhibition was curated by Laura Braunstein and was on display in the Class of 1965 Galleries from August 15 to October 14, 2008.

You may download a small, 8x10 version of the poster: Dime Novels (2.5 MB) You may also download a handlist of the items in this exhibition: DimeNovels.

The first book to be called a “dime novel” by its publisher, Malaeska established several elements that would come to characterize the popular Western: interracial romance, the distinction between “good” and “bad” Indians, and a sensationally melodramatic plot. After her father kills her white husband, the Native heroine takes her son to his father’s family in Manhattan, disguised as his nurse. She loses him in adulthood when the discovery of his true ancestry drives him to suicide. The tragedy of Malaeska, who dies “the heart-broken victim of an unnatural marriage,” highlights the dime novels’ trademark formula of sentimentality and violence.

The dime novel inherited its quintessential character, the frontier hero, from James Fenimore Cooper’s Leatherstocking tales. A loner perfectly adapted to his wilderness environment, the frontiersman was usually a white man who rejected civilized life in favor of a higher moral order shaped by the natural world. A mediating figure, he was associated with the “good” Natives while assisting the forces of progress.

Dime novels were enormously popular with both Union and Confederate soldiers in the Civil War. According to one book historian, dime novels were “sent to the army in the field by cords, like unsawed firewood.” The war began to emerge in dime novel plots in the 1870s, often as a backdrop for patriotic stories about frontiersmen using their skills as spies or scouts for the Union. California Joe disguises himself as a rebel spy, but is “true blue, or, more properly, true red, white, and blue with the stars thrown in,” and works with the Union Army to repair the breach that erupted through secession. The dime novel hero’s story could also provide an undercover identity: in Old Hal Williams a Southerner with Northern sympathies disguises himself as a stereotypical frontiersman in order to spy for the Union.

Criminal biographies were a staple of the dime novel’s British counterpart, the “penny dreadful” – itself a new package for the subject matter of the broadside murder ballads of an earlier era. While American publishers had no shortage of thrilling tales of the violent lives of notorious outlaws, dime novels often featured more respectable figures. Daniel Boone and Kit Carson were enormously popular heroes who were mythologized in their own lifetimes. Carson recounted in his autobiography that, too late to rescue a captive family of settlers, he found a dime novel version of his life story clutched in the hands of a dying woman. Dime novel publishers also capitalized on contemporary events; this biography of Lincoln was amended and reissued soon after the President’s assassination.

Dime novels perpetuated many of the most insidious stereotypes of Native Americans that continue to influence American popular culture. Cover images could portray heroic Native allies restoring captured children to their families, but more often they depicted the vicious savage. Tomahawk in hand, these “bad” Indians massacred women and children, or murdered unsuspecting white settlers in their sleep. These stories, now deeply offensive, justified Western expansion and its attendant genocide to their readers – most of whom had neither experience nor evidence that could lead them to doubt the authenticity of these mass-market myths.

Although the dime novels were first published during the Civil War and Reconstruction, they rarely offered explicit criticism of the institution of slavery. One exception was Metta Fuller Victor’s Maum Guinea, and Her Plantation “Children” (1861), which was allegedly praised by both Henry Ward Beecher and Abraham Lincoln for being as influential as Uncle Tom’s Cabin. Western adventure stories displaced the issue of race to an idealized frontier region. In The Deer-Hunters, black, white, and Native characters in the new settlement of Ohio danced together in harmony. African-American characters were often comic sidekicks or “faithful servants,” like the heroic Balaam in Redpath the Avenger, who rescues his captured mistress. In The Secret Shot, a mulatto woman conspires with her Native lover to destroy the family that brutalized her. Their revenge plot confounded, the couple perishes in a double suicide. Nor were white characters homogeneous; Irish, French, and German “races” added their ethnic stereotypes to the fantasy of frontier life.

The captivity narrative – in which a white protagonist (usually a woman) is abducted by Indians, with whom she sometimes comes to sympathize – was an enormously popular genre of American literature. Captivity narratives generally have the same structure, despite the Westward expansion of the border over which the captive is carried. The Revolutionary War setting of Old Tiger, the Patriot imposes the dynamic of the frontier on the story of American independence – a woman demonstrates her patriotism by resisting marriage to the Tory baronet who redeems her from Indian captors. In many of these stories, the marriage of the former captive and her rescuer secures the border settlement and extends the frontier westward. At the ending of On the Border, the town “gradually changed; from being a frontier once it became inland. Other families, beyond them, became borderers; other persons were exposed to danger from the implacable Indian....”

As in Malaeska, romance between whites and Natives in dime novels almost always ended in violent tragedy, or at the very least, erasure of Native identity and culture. In Ned Buntline’s The Red Warrior, a Comanche chief rescues a white woman captured by a rival tribe. When he cannot marry her, kills himself in an act of “savage chivalry.” Ann Sophia Stevens’s Ahmo’s Plot imagines a romance between Louis de Frontenac, the 17th-century governor of New France, and a Native woman. Frontenac atones for his transgression by committing to raise his daughter, exhorting her to “forget that this woman [her Native grandmother] was ever kin to you.” Prairie Chick is revealed to be the daughter of a frontiersman who chose to live among the Indians; united with her white half-sister, she moves East, “where she was easily persuaded to renounce her Indian habits and attire, and become a civilized being.”

Older Native women in the dime novels were either figures of great power and sympathy or comic foils. Topeka, the chief’s wife in Quindaro, frees a group of white captives. In return, she converts to Christianity, asking the frontiersman hero, “Will you teach me of the Being who rules in the sky?” Kaleolah, the Witch Queen, has been exiled from her tribe, but saves two white captives from the man who betrayed her. The Marked Bullet is a courtroom farce, in which the Native wife of a trapper is acquitted of murder in a comic demonstration of the coming of American justice to the frontier.