Documenting Invention: Patents and the Protection of the Useful Art 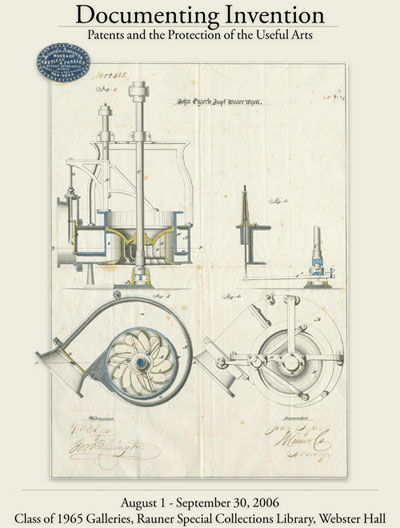 An exhibition of U.S. patents, patent law, and the protection of invention, from Samuel Morey's 1793 patent signed by George Washington to Charles Dudley's patented design for the Dartmouth senior cane.

The exhibition was curated by Barbara Krieger and Eric Esau and was on display in the Class of 1965 Galleries from August 1 to September 30, 2006.

Benjamin Thompson, Count Rumford, was born in Woburn, Massachusetts, in 1753 Benjamin Thompson married young and well, but as a loyalist, and a spy, during the American Revolution, was forced to leave America for England at the age of 22.  His political career in Europe, while successful, continued to be marked with the same intrigues as his dealings in America.  However, his real work was that of a scientist. His  investigation into the nature of heat led to many inventions still in use today, including the Rumford fireplace, the double boiler, several coffee pots, and the kitchen range. Not a single Rumford invention carried a patent:

"I desire only that the whole world should profit by it, without preventing others from using it with equal freedom."

Benjamin and John Tyler, residents of West Lebanon, held numerous patents for water wheels and water turbines. In 1855, John Tyler invented and obtained a patent for the “iron Tyler turbine water wheel,’ the first iron water wheel ever made.  He received 9 patents for improvement of the wheel which came into use on a national scale. Shown here are Benjamin Tyler's 1799 patent, signed by President Thomas Jefferson, and John Tyler's 1865 patent and drawing for an improved water wheel.

Thomas Green Fessenden graduated from Dartmouth in 1796. He studied law in Vermont with Nathaniel Chipman, occupying his leisure in writing humorous poems. He went to England in 1801, as agent for a new hydraulic machine, which proved a failure, and while in London he met Benjamin Douglas Perkins, son of Elisha Perkins, holder of the first U.S. medical patent, for metallic tractors.  Fessenden wrote a poem entitled "Terrible Tractoration," satirizing those who opposed the use of  Perkins tractors. Shown here are Fessenden's patent for a device to boil water and his 1810 essay on patent law.

Samuel Morey was born in Hebron, Connecticut in 1762.  At about the same time that Eleazar Wheelock was moving his family and his school to Hanover, the Morey family made a similar move, settling in Orford.  Samuel showed great mechanical and scientific ability as a youth.  His first patent, for a steam-operated spit, was granted in 1793.

He experimented with steam power as a means of propelling ships, exhibiting a stern paddlewheel boat on the Hudson River.  According to Morey, Chancellor Livingston offered him a considerable amount of money if he could increase the speed of the boat.  This he did by building a boat in Bordentown, New Jersey, with side paddlewheels, which he exhibited on the Delaware River.  Unfortunately, none of Morey's patents specifically mention the side paddlewheels. Robert Fulton's subsequent patent cited side paddlewheels as his own invention and claimed them for his own exclusive use. Morey later claimed that Fulton had stolen many of his ideas.

In 1826 Morey received one of the first American patents for an internal combustion engine.

Morey spent much of his life in Orford. His boat, "Aunt Sally," sailed around Fairlee Pond (now named Lake Morey) powered by a vapor engine.  He eventually moved across the Connecticut River to Fairlee, Vermont, where he died in 1843, a somewhat frustrated and embittered man whose seminal inventions never got their due recognition.

We have a Samuel Morey collection (MS-150), which contains these patents and other materials relating to Samuel Morey's life.

Engineer, inventor and explorer, Stephen Harriman Long was a graduate of Dartmouth College, Class of 1809.  In 1819, he was appointed by President James Madison to lead an expedition to find the sources of the Platte, Arkansas and Red Rivers, during which he climbed the Rocky Mountains, including the peak now named after him, Long's Peak.  After this expedition, he helped to survey and build the Baltimore and Ohio railroad.  He received his first patent for a steam locomotive in 1826.