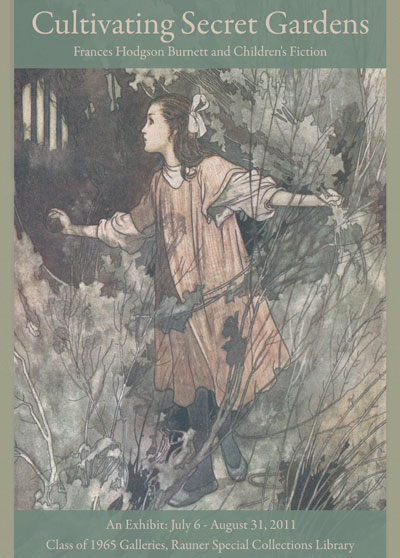 This exhibition is mounted in conjunction with "One Hundred Years of The Secret Garden: A Centenary Conference" cosponsored by the Leslie Center for the Humanities, the Department of English, and the Friends of the Dartmouth College Library.

The exhibit was curated by Laura Braunstein and Jay Satterfield and was on display in the Class of 1965 Galleries from July 6 to August 31, 2011.

You may download a small, 8x10 version of the poster: SecretGarden.jpg. You may also download a handlist of the items in this exhibition: Cultivating Secret Gardens.

Frances Hodgson Burnett began her career writing stories for popular magazines such as Scribner’s, Peterson’s, and Frank Leslie’s Illustrated Magazine. Manuscript drafts show little editing, suggesting an ease with writing that created her flowing style. But Burnett was also a determined businesswoman eager to protect her works in the marketplace and exploit them for their full worth.

As a strong advocate for authors’ rights to control reuse of their characters and stories, Burnett helped to reshape the writing profession. Incensed over an unauthorized dramatization of Little Lord Fauntleroy, in 1887 she successfully sued to gain exclusive rights to adapt her works. Her popular stage adaptations of novels such as Little Lord Fauntleroy and Sara Crewe (later renamed The Little Princess) brought in new audiences. Burnett refused to allow others to adapt her work for the stage and reaped significant financial gain by controlling each manifestation of her stories.

The lawsuit over Little Lord Fauntleroy afforded new levels of literary control to British writers and later helped to usher in a comprehensive international copyright law.

The Secret Garden participates in a rich tradition of imaginary places in children’s literature: Neverland, the Hundred Acre Wood, Mowgli’s jungle, the Land of Oz. In these places, children (or childlike creatures such as Kenneth Grahame’s Mole and Rat) must create their own paths through mysterious natural and supernatural landscapes. Nature can be challenging and dangerous, like the cyclone that blows Dorothy to Oz. But it is always a transformative, sacred space, like Mary Lennox’s secret garden. Robert Louis Stevenson’s title, A Child’s Garden of Verses, suggests that poetry cultivates a child’s imagination – or perhaps that the child’s imagination is itself a garden to cultivate with literature. Whether real, like Jo March’s apple orchard, or a metaphorical place to grow the spirit, these secret, imaginary enclosures of the natural world create special spaces for children to grow.

Frances Hodgson Burnett wrote The Secret Garden while planning the garden at her new estate at Plandome, Long Island in New York. The story, which a friend of Burnett’s referred to as “a sort of childrens [sic] Jane Eyre,” follows a few months in the life of ten-year-old Mary Lennox, orphaned by a cholera epidemic in India and sent to a mysterious manor on the Yorkshire moors. With help from new friends, Mary cultivates the house’s secret garden, and in doing so restores her emotional and physical health and that of her uncle and his son.

After serializing her story in the American Magazine, Burnett published The Secret Garden in simultaneous British and American editions in 1911. The novel was well received when it was first published, but did not attain the status of a children’s classic until several decades later. The 1949 film featuring child star Margaret O’Brien as Mary Lennox, and new editions in the 1950s, including one illustrated by Winnie-the-Pooh artist Ernest Shepard, popularized the book for new readers. There have been hundreds of print editions, and many adaptations for film, television, and theater, each bringing new audiences to Burnett’s classic story of the restorative power of nature.