Coeds & Cohogs: The Struggle over Female Integration at Dartmouth College 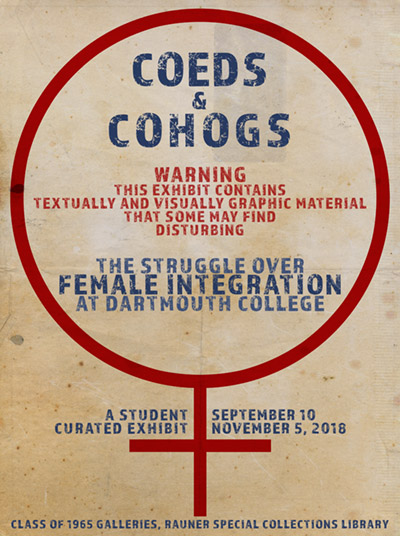 This student-curated exhibit explores the integration of female students at Dartmouth College. Using documents curated from the archives at Rauner Library, it considers the evolution of the College’s social character in the decades since the adoption of coeducation in 1972. Each case represents a distinct but interrelated facet of this unfolding process, treating, respectively, the complex and shifting perspectives of men, women, and the Dartmouth administration. Placed in dialogue with one another, each case seeks to lend historical understanding to our own time as the product of crucial transitions and distinct instances of convergence and discord in the ways that women have been seen at Dartmouth.
The exhibit was curated by Matthew Ix '20, Dante Mack '20, Chris Meister '20, David Nesbitt '20, Madeline Press '20, Ian Reed '21, Rushil Shukla '20, and Dayle Wang '20, all students in Darrin McMahon’s “The History of Equality” HIST 08 class, during the Summer of 2018. It will be on display in the Class of 1965 Galleries from September 17th through November 5th, 2018.
You may download a small 8x10 version of the poster. You may also download a handlist of the items in this exhibition.


Materials Included in the Exhibition

The implementation of coeducation posed many problems for Dartmouth as an institution. The Board of Trustees had polled its alumni beforehand and found increasing support for the inclusion of women at the college among its previous students. With that knowledge in hand, President Kemeny would spearhead the move towards coeducation with the formation of a Coeducation Task Force in 1971; other administrative initiatives attempted to address the needs of women on campus. However, despite the efforts of several key administrators, a misogynistic culture continued to pervade many of Dartmouth’s oldest traditions and events.

The documents in this case demonstrate the wide range of male students’ perspectives on female students at Dartmouth, beginning in the 1920s and extending into the 1990s. On the one hand, as the timeline shows, eighty three percent of the all-male campus was pro-coeducation in 1970. However, as the letters, photos, and songs demonstrate, a very vocal minority existed as well, consisting primarily of members of homosocial organizations such as sports teams and fraternities.  All of these perspectives surfaced within the larger context of a campus culture that objectified women and is best exemplified by the college’s annual Winter Carnival celebration.

Even after the implementation of coeducation at Dartmouth, women faced a continuing culture of discrimination and objectification. As documents in this case show, however, women were very often vocal and outspoken about the enduring misogynistic elements of Dartmouth culture. Their responses against intimidating acts by a small contingent of male students serve to underscore their fierce commitment to thrive at Dartmouth.