Down the Rabbit Hole: Alice's Adventures in Rauner

Lewis Carroll's Alice's Adventures in Wonderland has been a perennial seller for over 140 years. The absurdly whimsical tale has spawned new adaptations and interpretations for nearly every generation. This exhibition celebrates this year's Winter Carnival theme by examining some of the many wonderful editions and adaptations of Lewis Carroll's classic children's story collected in Rauner Library.

Alice’s Adventures in Wonderland served as the Winter Carnival theme at least once before: in 1973, “Through a Frosted Looking-Glass” inspired dozens of snow sculptures across campus based on John Tenniel and Lewis Carroll’s collaboration.

The exhibition was curated by Patti Houghton, Barbara Krieger and Jay Satterfield and was on display February 9 - March 31, 2007. 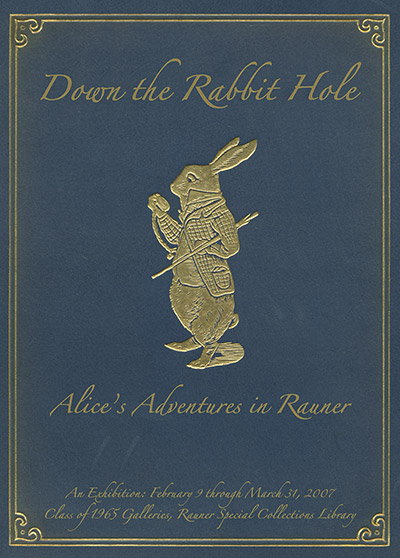 You may download a small, 8x10 version of the poster: AliceInRauner.jpg (2.3 MB) You may also download a handlist of the items in this exhibition: Alice in Rauner.

The true “first edition” of Alice’s Adventures in Wonderland is considered a black tulip by book collectors: an item so rare that your chances of even laying eyes on a copy are remote and the possibility of purchasing one nearly non-existent.  John Tenniel, the original illustrator, rejected the 1865 Macmillan edition because the printing quality did not meet his standards for quality.  Nearly all of the 2000 copies printed were destroyed and Macmillan re-issued the book in December of 1865 bearing an 1866 imprint date.

The first American edition, issued by Appleton, is actually a second issue of the original 1865 edition. Macmillan disposed of some of the rejected sheets for the first edition by selling them to the New York publisher.  The difference in printing quality becomes obvious when the books lay side by side.

Case 2. Alice and Her Interpreters

The qualities of Alice that have kept the book current have also made it a favorite for illustrators and printers.  John Tenniel’s original iconic illustrations have been reinterpreted hundreds of times since they first came to the public’s attention.  The variations are striking and show differing visions of the text: from a hallucinatory journey to a light and witty story for children.  Barry Moser’s 1982 presentation of Alice, with its dark images, contrasts with the airy illustrations executed by Marie Laurencin for the 1930 Black Sun Press edition.  Both are a far cry from so many of the popular versions that have appeared over the years.

Case 3.“One Pill Makes You Larger…”

Jefferson Airplane’s “White Rabbit” was not the first time Alice found her way into song:  Lewis Carroll’s “Nonsense Songs” were set to music almost right away. The music combined with film, radio and stage adaptations have worked alongside retellings, fresh editions, reading cards, and events such as Winter Carnival to keep Alice ubiquitous in the culture.