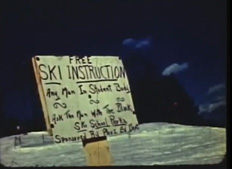 This promotional film for Dartmouth College emphasizes Dartmouth Outing Club (DOC) events, such as Freshman Trips and Woodsmen's Weekend, and activities such as hiking, skiing, canoeing, fishing, and mountaineering. The DOC, the largest extracurricular activity on the campus, organizes outdoor trips, provides outdoor leader and medical/safety education, maintains cabins and over seventy miles of trails in Vermont and New Hampshire, and is the first introduction to the College for most of the incoming students. Moosilauke Lodge is the first stop for freshmen.

We can see a colorful and interesting story of the various outdoor activities through the years of the DOC. The film includes tennis, Moosilauke Lodge, canoe instruction on the Connecticut River, the annual Woodsmen's Weekend (chopping felling, sawing, splitting), tower-paralyzing in spring, Winter Carnival (including dog sledding on the Green, the building of the snow sculpture, and the annual Winter Carnival poster), skating, alpine and cross-country skiing, white water canoeing, trout fly tying and fishing, hunting, camping, and rock climbing -- all the activities which have made the Outing Club famous -- are presented in a colorful panorama. Also, Ross McKenney (1890-1971) is shown teaching woodsmen's skills in this film.

SPEAKER 1: This is the setting. On Hanover Plain among New Hampshire's hills, just a glance across the Connecticut River from Vermont, Dartmouth College has grown from a log hut, built in 1770, into a liberal arts college of 3,000 men, respected throughout the educated world.

Because the town of Hanover is small, it is the community of the college. And Dartmouth students are at once members of the college and the community. Dartmouth's men come from every state in the union, the territories, and 25 or 30 foreign countries.

Dartmouth is noted for the excellence of its faculty. It offers its students unrestricted use of one of the finest undergraduate libraries in the world. Through the liberal arts, Dartmouth aims to provide young men with a rounded general education as a basis for intellectual development and spiritual growth.

Dartmouth is an active college. Besides academic work which demands a maximum in effort and accomplishment, many students engage in extracurricular activities, such as dramatics, intercollegiate sports, radio, music, or serving on student publications.

Informality is the keynote at Dartmouth. Learning, the business.

Each fall before college begins, freshmen are offered an introduction to the largest extracurricular activity on the campus, the Dartmouth Outing Club. The guides for the annual freshmen trip are veteran Outing Club men who explain the club of the freshmen.

The DOC maintains 16 cabins and over 100 miles of trails in Vermont and New Hampshire. Dartmouth's Moosilauke Ravine Lodge, at the foot of Mount Moosilauke, is the first stop for the freshmen. Then they swing on their packs and start up the mountain.

The club offers much besides its famed winter sports. It teaches with these forests as its classroom resourcefulness and self-sufficiency, how to improvise with bone and leather, how to construct with bark and wood, how to live comfortably beneath a warm summer sky or in the very midst of a howling storm in winter.

The trained woodsman must know how to paddle his own canoe. And when the freshmen return to Hanover, the Outing Club's woodcraft advisor, Ross McKinney is on hand to show how easy it is or rather how easy it looks.

Reliable instruction and a lot of practice is no less necessary when you swing two pounds or razor sharp steel over your head. Casting is also taught. The freshman learn quickly and at the end of the trip many sign up for membership in the Outing Club.

Headquarters for the DOC is on the West side of campus. A busy bulletin board in a large meeting room keeps members in touch with all phases of the club.

Each fall after classes or on weekends many Outing Club men enjoy not only the excellent hunting for woodcock, grouse and pheasant but also the beauty of the season. This transition between the cool, dark green of early fall and the still white of water is at its height just before the snows, the last sputter before the flame goes out.

Ski instruction at Dartmouth is well organized under the physical education and is taught by expert instructors on the golf course. Here's one of those cases where it's a matter of paying attention or—

Nearby Oak Hill, operated by the college, presents more of a challenge for the advance skier. This afternoon the last time trials before Winter Carnival are being held on Oak Hill for some members of the ski squad.

Coach Walter Prager, internationally famous skier and Olympic team coach, does a bit of final polishing on one of his best racers.

Dartmouth Winter Carnival is the social event of the year. It's a huge party with hundreds of girls, two dozen or more dances, Christmas lights on Main Street, and professional newsmen crouching behind Speed Graphics and newsreel cameras.

Behind the glitter lie long hours of work. Mixing the snow to be molded onto the frame of the center campus statue is only one task of the Carnival committee. It must also take charge of the publicity, competition, the ice show, entertainment, and many other responsibilities accompanying such a huge production.

Each student posing for a snapshot with his date hopes that she will be the lucky girl to be crowned queen at the outdoor evening ice show.

The hard core of Carnival, the kernel from which it grew is the winter sports competition, competitive skating on Occom Pond, downhill racing on Moose Mountain; the arduous cross country race; slalom on Oak Hill; and keen competition on the 40 meter jump are the events which draw some of the best collegiate contestants to Hanover each winter.

The most photographed, and perhaps the most remembered scene of the whole Carnival, is the crowning of the queen.

Spring. The ice is out. Every change of season brings new sport or Outing Club men. In early spring, with streams and rivers swollen from melting snows, Dartmouth men rush to meet the challenge of whitewater canoeing.

The bow man holds the key. If he knows his business, and if the stern man follows his lead, the canoe won't capsize or smash against a boulder.

If a canoe does pile up on the rocks, repairs can be made at Ross McKinney's Outing Club shop back on campus. Here men learn the woodsmen's crafts. Working with hand tools, they fix axe handles, make snowshoes, pack boards, moccasins, and belts, and fashion their own canoe paddles.

Fly tying is popular during the spring. Starting with a bare hook in the vice, they fashion a delectable trout dinner out of bucktail, bits of feather, and lengths of silk. This gray ghost looks as if it would tempt even the most retiring rainbow.

The real test comes later on Dead Diamond River in the college grant. 27,000 acres of forest in Northern New Hampshire owned by the college. The wilderness of the college grant is very popular with Outing Club men on weekends and vacations during the year.

The menu says trout for dinner. A strike. Easy. Careful. Now [INAUDIBLE]. This trout in the hand and more in the pan, together with some baked potatoes, biscuits, and raisin pudding, will fill out the menu and make the day's paddling very worthwhile.

Members of the Dartmouth Mountaineering Club-- unaffiliated with the Outing Club-- get the jump on the season each spring by repelling down Bartlett Tower. Practice climbs are made on nearby cliffs.

Late each spring, Woodsmen's Weekend offers fine competition for members of several different college outing clubs. The fire building contest starts the event. And skills are matched in everything from fly casting to canoe racing.

The splitting contest is one phase of the axemanship tests where speed wins out, but accuracy is advisable. The pack race gets off to a fast start. Woops. I thought I heard something drop.

Swing a canoe onto your shoulders, race for the water, and then man that paddle.

The competition over the weekend is a fine test for the Outing Club men and a stimulus for them to try even harder to master the many intricate arts of the woodsmen.

Yes, this is the setting. And the Outing Club continues to be a vital part of Dartmouth College. Settled in New Hampshire's hills by men strong enough to pit themselves against the hostile wilderness, Dartmouth was uniquely appropriate as the birthplace of the first collegiate outing club.

With learning as an invariable focus, the student is privileged to enjoy the whole broad experience that is Dartmouth. And what a mad experience is at Dartmouth and in the Dartmouth Outing Club will be with them always. Those trails once started never end.