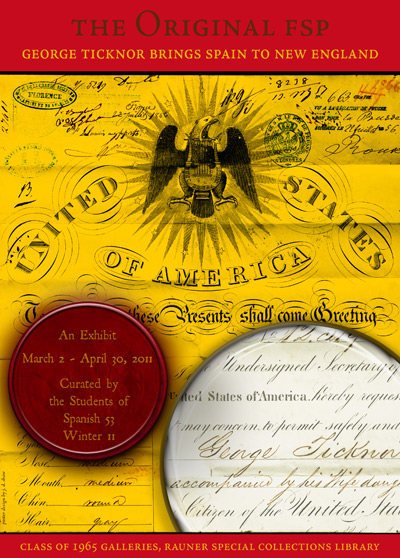 A Dartmouth graduate of the class of 1807, George Ticknor ushered in a new era of Hispanism in the United States through his travels in Spain and his subsequent scholarship. Ticknor embodied the intellectual spirit of 19th-century New England through his varied academic pursuits. He guided the American transition from mere enjoyment of things Hispanic, or hispanofilia, into hispanismo, a productive analysis of and intercultural engagement with things Hispanic, which would foster profound academic inquiry for years to come. Pursuing similar aims to those of Ticknor, many Dartmouth students participate in Foreign Study Programs (FSPs). By curating this exhibit, the students of Spanish 53 expose the roots of the scholarly quest to immerse ourselves in the language and culture of other countries.

You may download a small, 8x10 version of the poster: OriginalFSP.jpg (2.8 MB). You may also download a handlist of the items in this exhibition: Ticknor Handlist.

Case 1. Ticknor's Travels in Spain Prepare Him for a Career in Hispanism

George Ticknor was a pioneer in the study of Spanish literature in the United States. In 1815, he set out for Europe, where he received news of his appointment to the first "Smith Professorship of the French and Spanish Languages and Literatures" at Harvard University. He traveled to Spain to acquire a better knowledge of the language and literature, and to amass his Spanish library, which came to be considered the best collection outside of Spain. He drew from these materials, experiences, and mentors to construct a syllabus on the history and criticism of Spanish literature, which served as the basis for his most famous work, History of Spanish Literature.

Case 2. Ticknor and His Associates

The United States came of age during Ticknor's lifetime. Early nineteenth century Americans equally sought to develop a functional democratic government, find their footing internationally, and construct a literary identity. Each objective relied interchangeably on the others. As a member of the Boston elite and a prominent man of letters, George Ticknor engaged in this process throughout the course of his life. The objects displayed illustrate the collaborative intellectual environment that shaped Ticknor and on which he left a lasting mark.

Through his studies in Spain and publications including History of Spanish Literature, George Ticknor developed a legacy that would survive long after his travels in Europe. His passion for European studies and literary criticism placed him among the foremost minds in America, and he collaborated with contemporary political figures such as Thomas Jefferson and Daniel Webster to develop American intellectualism. Furthermore, at Dartmouth, Ticknor’s successes also led to friendships with campus figures such as Sylvanus Thayer (of the Thayer Engineering School) and the establishment of a scholarship in Ticknor's name. By the time of his death in 1871, Ticknor had left a legacy within Dartmouth and the field of Hispanic studies that still marks him as one of America’s finest 19th-century scholars.

Case 4. Impact and Reception in Europe

George Ticknor’s three-volume masterpiece, History of Spanish Literature, was widely distributed in Europe, having been translated from English into French, Spanish and German. This work was often positively received in Europe, but Ticknor’s position as an outsider did not go unnoticed, piquing Spanish nationalist pride, and particularly that of José Amador de los Ríos, who, in response, proceeded to write his Historia crítica de la literatura española.
In either case – viewed as a masterpiece or an imposition – Ticknor’s work began to fill an oft-lamented gap, first, by contributing substantially to the study of Spanish literature and, later, by inspiring or provoking others to further explore and describe the history of Spanish literature, be it through a continuation such as that of Gayangos or a reaction like that of Amador de los Ríos.