The Doctor Will See You Now ...

These three exhibits revolve around the theme of how the medical profession has related to human bodies over time. Are they a set of symptoms and syndromes to be treated, or people in need of help? Is the body something to marvel at, or something that needs to be corrected and perfected? And, in the anatomy lab, is the cadaver a disrespected corpse or a treasured yet impersonal gift?

Curated by students from Sienna Craig’s “Values of Medicine” First Year Seminar, the exhibits draw on the rich medical history collections in Rauner Library to question how the ethics and practice medicine have transformed over time. 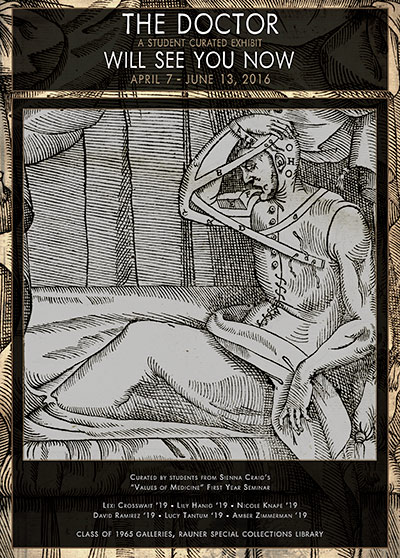 You may download a small, 8x10 version of the poster: TheDoctorWillSeeYouNow.jpg. You may also download a handlist of the items in this exhibition: Doctor.

Case 1. The Changing Face of Plastic Surgery by Lexi Crosswait ‘19 and Lily Hanig ‘19

This exhibit explores the evolution of facial plastic surgery, in particular rhinoplasty, and its changing role in society. Today the term “plastic surgery” often implies the desire to achieve beauty ideals, but it has a complicated social history beyond this modern stereotype.

Methods to facilitate healing of nose injuries date back to Egyptian hieroglyphs from 2000 B.C.E. Remarkably, these earliest methods of surgery resemble current day rhinoplasty. Skin grafting techniques developed in 400 B.C.E by the Indian physician Shushrata are also still reflected in today’s methods of facial plastic surgery. Building on ancient Egyptian precursors, he developed skin grafting methods for functional purposes, like replacing criminals' noses, which were often cut off as punishment for adultery.

For several centuries, only Indian physicians knew of Sushrata’s methods; however, during the 1500s the Italian surgeon Tagliacozzi obtained an Arabic translation of Sushruta’s works via the Silk Road. He expanded on Sushruta’s methods of repairing injured faces and focused on the restoration of a patient’s identity by minimizing scarring and normalizing the nose.

In the late 1800s, anti-Semitic prejudices increased in Germany. The “Jewish nose” became a defining feature for anti-Semitics to classify Jews as “not white.” Subsequently, many people with “Jewish noses” pursued rhinoplasty to change their appearance and avoid discrimination.

The Principles and Art of Plastic Surgery, written in 1957,demonstrates the place of plastic surgery in war by showing images of improved surgical methods used on soldiers injured in World War I and II. Beyond illustrating skin grafting methods, this text also focuses on surgically altering the faces of people with heritable facial anomalies, such as cleft palates. This book heralds the convergence of plastic surgery to address both inherited and injury related deformities. In contrast, The Evolution of Plastic Surgery, from 1946,demonstrates nonessential modifications of “nasal deformities,” such as surgically altering “deviant” noses without medical justification.  While plastic surgery developed to help people overcome discrimination from deformity, it has also responded to and helped to shape social norms and other forms of prejudice. Thus, it has a rich social history beyond its more narrow modern connotations. 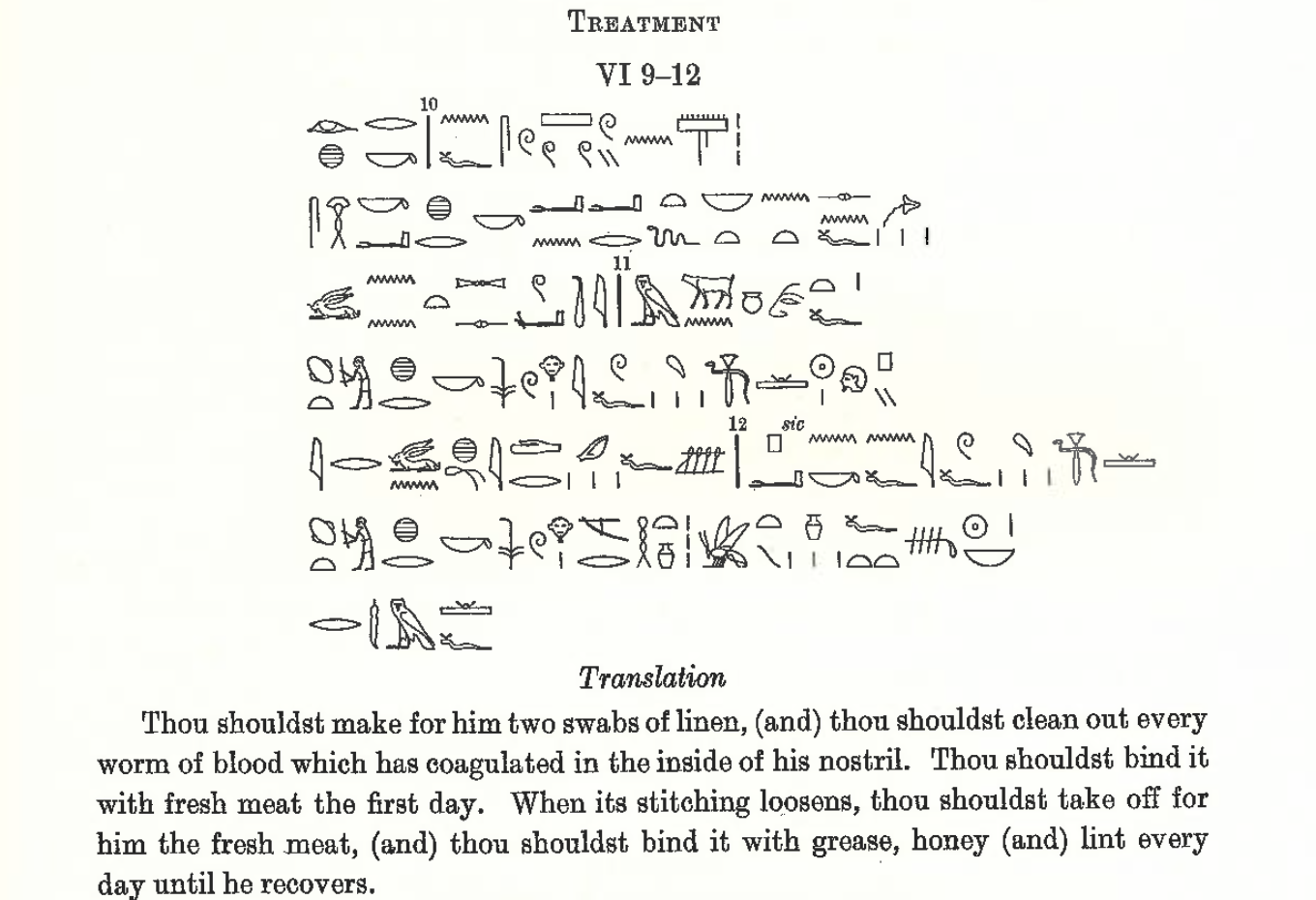 Case 2. Care to Cure: The Historic Cycle of the Medical Gaze by Nicole Knape ’19 and Amber Zimmerman ’19

Would you rather overhear your doctor tell your nurse “The brain aneurysm in room 338 needs your attention” or “Mike in room 338 is feeling unnerved and could really use some support?”

Your response to this question reflects what is now recognized as the “medical gaze.”  The “medical gaze” reflects the relationship between doctor and patient, wherein a suffering patient relies on an authoritative and knowledgeable caretaker. And yet this idea that a doctor sees a patient as a collection of symptoms or pathologies – perhaps instead of seeing them as a whole person – represents historical and social change. French philosopher Michel Foucault developed the phrase in 1963 to portray the 19th century medical profession and its shifts from earlier orientations of medical practice.  Foucault claims that the concept of the medical gaze can be summed up in the shift from physicians asking patients “What is ailing you?” to asking, instead, “Where does it hurt?”  The first question is meant to encompass how a disease, pain, or symptoms affect the entirety of the patient and his life; the second question focuses on parts and symptoms, not the whole person.

While Foucault has made a powerful point, in this exhibit we explore how medical gaze is dynamic, reflective of the partnership between physician and patient, and not always solely focused on parts or cures.

In earlier periods of medical history, especially Medieval and Renaissance sources we explore in this exhibit, the medical profession’s understanding of the patient was portrayed in more humanistic terms. Images and texts often focused on the connection between mind and body in relation to a person’s life experiences – and even to things like religion and astrology, in which understandings of health and illness were imbedded.  In many of these early sources, it is as if the doctor gains understanding of the patient through his overall life story or place in society.  This may be attributed to not only societal views of medicine, but also a lack of modern medical knowledge, technology, and techniques at that time.

These images reflecting earlier versions of the medical gaze contrast with later depictions of patients as a collection of parts, or a disease category rather than a person. Foucault explains, “Facilitated by the medical technologies that frame and focus the physicians’ optical grasp of the patient, the medical gaze abstracts the suffering person from her sociological context and reframes her as a ‘case’ or a ‘condition’” (2003: 23) The doctor, in this case, strives for disease treatment, but not necessarily patient care.

The texts in this exhibit highlight the cycles and trends of the medical gaze throughout history.  We begin in 1500, a time when medicine was represented as more humanistic, capturing the value of life experiences and the relationship between, mind and body, soul and society.  We then take you on a journey through time, exploring the medical world’s transition into specializations, which serve to create further distance within interpersonal doctor-patient relationships by concentrating on parts in need of attention rather than a whole person in need of empathic treatment.  Finally, we will explore the revolution of the medical gaze, revisiting the ways that 15th and 16th century values of humanistic medicine have resurfaced, while also taking advantage of modern advancements in medical knowledge and science.


Case 3. From Robbed to Respected: Bodies of the Anatomy Lab by David Ramirez ‘19 and Lucy Tantum ‘19

The anatomy lab, where first-year medical students dissect human cadavers, has long been a mainstay of medical education. Over the years, the environment of the lab has changed, as have the demographics and procurement methods of cadavers. This shift has affected students’ perceptions of the bodies they study. While previous generations often knew the source of their cadavers—prisons, poorhouses, or local graves—and treated them according to social norms, today’s students view cadavers with impersonal respect, knowing little about their backgrounds.

Founded in 1798, Dartmouth Medical College demonstrates this evolution. In the 18th and 19th centuries, demand for human cadavers led to the practice of grave robbing, which afforded students the opportunity to view real (albeit decomposing) cadavers. To the medical students, such acts were seen as justifiable: the victims were poor people and criminals who did not garner respect in life or in death. Consequently, students may have studied their cadavers with a sense of moral superiority; these attitudes may have translated into how they later treated live patients. Grave robbing declined by the end of the 1800s, though the bodies of the poor were still sold to medical schools. By the later 19th and early 20th century, donating one’s body to science was possible. However, body donation was unpopular until the 1960s.

Now, whole-body donation is considered an ultimate act of altruism, and it no longer carries the same social and moral taboos. Additionally, today’s anatomy lab is a clinical environment where cadavers appear more homogenous. In places like Geisel Medical School today, body donors are largely older, white, and affluent. In addition to demographics, embalming methods also create a sense of uniformity. Like biomedicine as a whole, the anatomy lab has become an increasingly controlled setting, leading to respectful treatment of cadavers, but also a form of depersonalization that can make it more difficult to identify social determinants of disease and death.