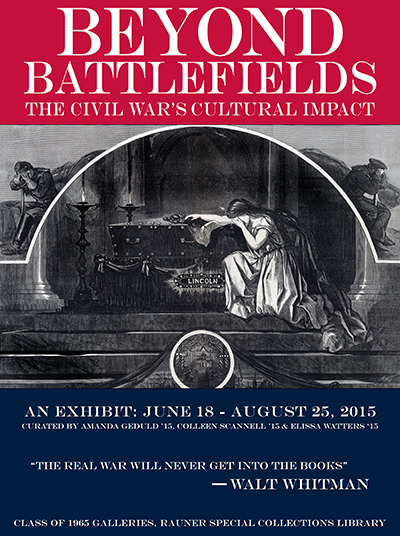 Although Walt Whitman famously claimed “the real war will never get into the books,” the American Civil War called forth a vast range of literary responses, in genres as diverse as poetry, popular song, novels and other prose genres. Much of that literature, however, did in fact not appear in books, but in magazines, newspapers, and letters. These texts did not just respond to the war; they also intervened actively in shaping its cultural meaning. This exhibit, curated by students from Colleen Boggs’s English 72: Civil War Literatures, provides three case studies of the Civil War’s cultural impact. We invite you to examine how the verbal, textual, visual and auditory connected the homefront to the battlefront, and changed Americans’ views of their country and of themselves.

The exhibit was curated by Amanda Geduld ’15, Colleen Scannell ’15, and Elissa Watters ‘15 from Colleen Boggs’s English 72: Civil War Literatures. The exhibit was on display in the Class of 1965 Galleries from June 18 to August 25, 2015.

You may download a small, 8x10 version of the poster: BeyondBattlefields.jpg. You may also download a handlist of the items in this exhibition: Beyond Battlefields.

Case 1. Women in the Civil War

Women of the American Civil War

During the American Civil War, visual depictions of women situated the female body in a variety of realistic, imagined and metaphorical spaces and contexts. Representations of women as the emotional bearers of grief, as protectors of the home and its comforts, as participants in the war, and even, at times, physical embodiments of the war, are among the many visual tropes that prevailed at the time. The many positive and negative, complementary and paradoxical depictions of women betray the complexities confronted by men and women during the Civil War. These iconic images relocate onto the female body such psychological struggles as crises regarding widespread death, displaced homes, and questions of participation in the war effort. They also played a fundamental role in refashioning female roles and identifies in the years during and shortly following the War.

Long a prevailing image of the home, women continued to mark and represent domesticity throughout the War. As young men left for the battlefield, the home became a place of consolation, a continual reminder of peace, love and comfort fostered through cherished memories and souvenir packages. The trope of the domestic female who protected, nurtured, and cared for the home (both in man’s presence and in his absence in war) located women at the center of the image of home.

Patriotic envelopes created during the war demonstrate the wide range of iconic images produced during the war. The selection on display here shows a variety of depictions of women, with a focus on women as participants in the war and its efforts. The image of Virginia lighting the cannon of secession before which she stands contains a perplexing message of female involvement and martyrdom. Similarly troubling is an image of the woman as the victim of the secession serpent. The final two envelopes address issues of the homefront becoming a battlefront through the production of wartime necessities and presence of death within the home or family.

Published in Harper’s Weekly, perhaps the Union’s most popular and widespread periodical of the time, just weeks after President Abraham Lincoln’s assassination on April 16, 1865, this image illustrates the woman as a bearer of grief. On a metaphorical level, the woman represents Columbia mourning for the entire nation (even one still divided) over the death of Lincoln, who had become a representation of the Civil War, the fight to save the Union, and the nation itself.

Case 2. The Civil War in Hanover and Surrounding Areas

The Civil War greatly affected the entirety of the United States of America. Although the vast majority of the battles did not reach as high as New England, there was nevertheless a dramatic effect on the home front. The documents you see here offer a glimpse into our homefront: the involvement of Hanover and the surrounding areas of New Hampshire in the Civil War, and the effect that the war had on the Upper Valley.

Case 3. Sounds of the Civil War

If you were to explore the history of Civil War prisons what would you expect to find? Photographs? Journal entries? Letters? Or perhaps songs and prayers? You would certainly not expect to find a clip on YouTube, a podcast on iTunes, or a blog. EvanKutzler argues that while written accounts of what occurred in prisons during the war are important, so too is the “sensory history.” He believes sound “further humanizes social history” so he studies the role sound plays in captivity, arguing that prisoners listened for noises to better understand their current and future conditions. Furthermore, sound and silence were utilized as an instrument of power for both the prison guards and the inmates. By looking at Civil War prisons we can examine the means by which we learn and understand history.

Listen to the War

Read each letter and then listen to the recordings of General Neal Dow’s journal entries from his time Libby Prison (go to /library/rauner/exhibits/civilwar_audio.html or click on the QR Code) What new pieces of the past can be pieced together through sensory history? What are we losing when we cannot obtain such a sensory history and how else can we successfully retrace the sounds of the Civil War?