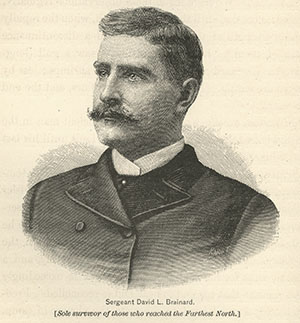 Brainard's writings exist in three forms: penciled field notes,1 inked journal,2 and published writings based on the inked journal. The first of the latter appeared in Lieutenant Greely's official Report in 1888.3 However, it was 1929 before Brainard partially-published his journal The Outpost of the Lost,4 and the entire journal did not appear until 1940 in Six Came Back.5

A notable example of an alteration concerns the entry for 27 April 1884, relating to Private Charles B. Henry's past:

"Henry brewed the issue of alcohol without authority & stole enough of the precious fluid to get thoroughly and disgustingly drunk. He is a born thief as his 7th Cavalry name will show – a perfect fiend." . . . "With the exception of the thief all are doing their best."6

"Henry made the issue of diluted alcohol today without authority and stole enough to make himself thoroughly and helplessly drunk. He is a born thief – a man without conscience, principle or heart – in short a perfect fiend." . . ."With the exception of the one who is branded with the title of thief, all are doing their level best to prolong life and to live harmoniously." . . . “"Great indignation was felt because of Henry’s thiefs [sic] this morning."7

"Henry made the issue of diluted alcohol without authority to-day, and while doing so he stole enough of the precious fluid to make himself helplessly and disgustingly drunk. He is a born thief; a man without conscience, principle, or heart – in short, a perfect fiend." . . . "At the present time, with the exception of the one who is branded with the title of thief, all are doing their best to prolong life and to live harmoniously together."8

The Outpost of the Lost

"Henry made the issue of diluted alcohol today without authority, stealing enough of the precious fluid to make himself disgustingly drunk. He is a born thief." . . . "At the present time with the exception of the one who is branded with the title of thief, all are doing their best to prolong life and live harmoniously." . . . "Great indignation was felt over Henry’s theft. Gardiner crawled on his hands and knees (too weak to walk) to reach Henry, with every intention of throttling [choking] him." [end of entry]9

The identical entry as appeared in The Outpost of the Lost.10

“He is a born thief as his 7th Cavalry name will show” – these critical words in the field notebook were not repeated in any published form, and to date, LFBE historians have consistently written that no one on the expedition knew of Henry’s criminal history, even though Brainard’s words plainly show otherwise.11 Since Brainard was first sergeant (chief of enlisted men), it is possible Greely (and perhaps others) also came to possess the same knowledge. The most likely reason for the editing was in order not to disparage the 7th Cavalry’s name, given that Brainard had joined the Army in September 1876, only three months after Custer’s disaster at the Little Big Horn.

In a 1940 interview, Brainard made reference to still having the field notebooks in his possession,12 and all but one of the field notebooks were eventually donated to the National Archives – the exception being No. 11. This notebook was found wrapped up in a silver vegetable dish, along with "two bullets," in 1954 by Brainard's stepdaughter Elinor Guthrie McVickar.13 However, the label for No. 11 notebook was discovered by the author in the National Archives, with the following in Brainard's hand: "No. 11. From March 1st 1884 to June 21st 1884 incl. This notebook also contains records of issues of provisions [and] Record of the caches on Grinnell Land coast taken by the L.F.B. Ex."14

Some of the notebooks are hand numbered, however, No. 11 notebook (the Camp Clay Journal) features printed numbered pages: pages 1-63 contain information and calculations related to provisions, plus a few notes regarding the property of expedition members and monies owed to them; pages 73-234 cover entries for 1 March-4 June 1884; the entries for 5-21 June 1884 are made on 21 unnumbered pages, but oddly, printed page numbers for 239 and 240 of the notebook appear thereafter (and include an entry dated 31 March 1884, with a list of imagined foods to purchase aboard ship, and a dispatch to his father, to be sent from St. John’s, Newfoundland, dated 2 April 1884). Brainard also left blank spaces in this notebook for orders in Greely's hand regarding Private Henry, being the shoot order of 5 June 1884 (stated by Brainard to be a copy)15 and the execution order of 6 June 1884. In a 1935 newspaper interview he said he still had the execution order.16

Historian Leonard Guttridge wrote that Brainard had charge of all the expedition’s journals from the time of the rescue, during his homeward voyage on the Thetis, and up until the journals arrived in Washington. Guttridge further indicated that "Brainard had composed a narrative in diary form [i.e., inked journal] on the Thetis coming home."17 However, in 1940 Brainard related that he "dutifully made transcripts of this record [notebooks] on his return to base camp [Fort Conger] on that expedition".18

The inked journal comprises three volumes. It's not without interest that volume two (dated by Brainard 10 September 1882-7 March 1884) contains the following notation in red ink on the first page, written in a different hand: "2/6225 Mis 1884 (When originally filed this journal was written up to Aug. 8, 1883, and was afterward written up by Sgt. Brainard from Aug. 9, 83 to March 7/'84 ML [presumed clerk's initials] 10/19/85)".19 Three years after this notation was made, extracts from the volumes two and three of the journal appeared in Greely's official Report, covering the dates 26 August 1883 (from the expedition's besetment in ice during its southward retreat to Cape Sabine) through 21 June 1884.20

The evidence therefore indicates Brainard had not written up the inked journal from his field notes from at least 9 August 1883 through 21 June 1884 by the time he returned to the United States: this was nearly the exact period covered in Greely's 1888 Report, and the identical period published in The Outpost of the Lost in 1929. With the publication of Six Came Back eleven years later, Brainard's entire journal finally saw print, but it was still much changed from his original field notebooks.21

15. In the 5 June entry of No. 11 notebook, Brainard noted Henry's continued thieving and wrote that "…the C.O. issued an order to Long, Fred, & myself to shoot him if any other acts of a like nature by repeated. I insert a copy – " (below is a blank space 2 ¾" long on the unnumbered page), the papers of David L. Brainard, Rauner Special Collections Library, Dartmouth College Library.

21. Brainard, The Outpost of the Lost, and Six Came Back.