Up for Grabs: Campaigning, Debating and the New Hampshire Primary

Are you ready? It is that time again when New Hampshire takes center stage and the presidential primaries begin in earnest. We've mined the manuscript and archival collections to take a look at the history of the primaries with a special nod to their impact on campus. Come to the Class of 1965 Galleries in Rauner Library to get in the spirit of the season!

The exhibit was curated by Barbara Krieger and Jay Satterfield. The exhibit was on display in the Class of 1965 Galleries from January 4 to February 12, 2016. 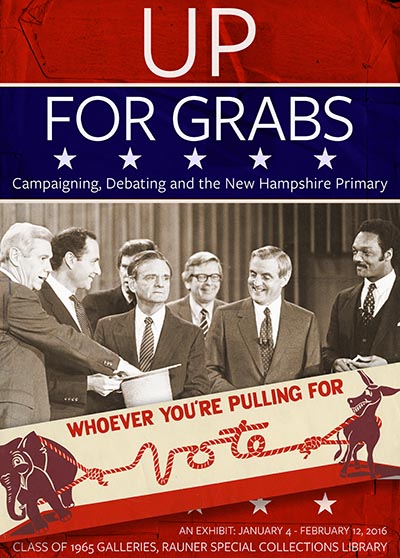 In 1968, the New Hampshire primary significantly reshaped the presidential race. On the Democratic side, Eugene McCarthy’s surprisingly strong showing contributed to President Johnson’s decision to drop out of the race. On the Republican side, Michigan Governor George Romney’s weak polling numbers caused him to withdraw just before the primary leaving a clear path to the nomination for Richard Nixon.

The urgency of the draft, the Vietnam War, and the rumor that Nelson Rockefeller ’30 might enter the race made the primary particularly poignant to Dartmouth students. The Dartmouth provided extensive coverage and the 1968 Aegis devoted four pages to the political excitement.

All sticker and posters in this case came from MS-1147 Box 4 unless otherwise noted.

New Hampshire has held a Presidential preferential primary  since 1916, but it wasn’t until 1952, under new election laws designed to increase voter turnout, that the nation turned to New Hampshire to test the presidential waters.  Candidates entered, or left, the race based on the primary’s results.  For 10 election years, 1952 through 1988, the person elected president in November had also won his party’s primary in New Hampshire. It’s not hard to see why every four years politics in New Hampshire is big news.