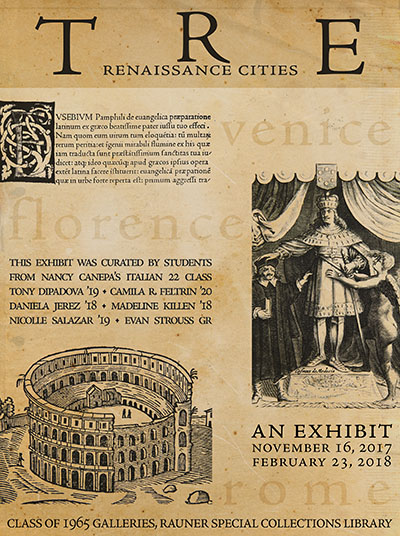 The extraordinary cultural production of Italy from the late-fourteenth to the end of the sixteenth century—what we call the Renaissance—exerted a defining influence on Western modernity. The richness of the literature, art, and politics of this period fascinate us still today. This exhibit examines a wide range of innovative modes of expression in three Italian cities. They narrate the creative intersections and tensions between historiography, politics, and ideology in Florence; the invention of printing and changing practices of reading and writing in Venice; and architectural re-imaginings of classical antiquity in Christian Rome.

You may download a small, 8x10 version of the poster. You may also download a handlist of the items in this exhibition: TRE.

When the printing press made its way from Germany to Venice shortly after its invention in the mid-15th century, printers soon realized that typefaces modeled after the Gothic hand would not sell in an Italian market. Because Italian readers were used to the lighter humanist and Italian court hands, printers made and commissioned type modeled after these hands. As Venice flourished and its influence and printed books spread throughout the European subcontinent, the clearly legible typefaces became increasingly popular. Today, the modern reader finds the Gothic hand difficult to decipher, while the humanist and italic typefaces are more familiar — we have Venice to thank for that. The goal of this case is to give a glimpse into the evolution of book styles in Renaissance Venice resulting from the adoption of the printing press. These books show different typefaces, hands, decorations, and sizes, but are only a snapshot of the various aesthetic techniques used in this time period.

Florence was a cultural and artistic hub of Italy and the world at large during the Renaissance. The Renaissance as a whole was characterized by a focus on history and the classics, and this manifested itself in Florentine literature through the creation of new histories of Florence and beyond. This literature revolutionized the study of history: historians like Leonardo Bruni and Giorgio Vasari are often credited with being the first modern historians due to their periodic approaches. Politics influenced these historians to frame Florence as a cultural and economic center throughout Italian history in order to empower Florence as a natural heir of Roman Empire. From the Florentine Republic to the later Medicean government, these historians used their works to legitimize their respective governments to Florentines and to all Italians. In these selected works, look for the characteristic Medici crest, which consists of 6 balls on a shield; this can be found on many printed works of the period due to the grand influence of the Medici.

The term “Roma sparita,” often used to describe the eternal city, might be translated best as the “Rome that has disappeared.” Indeed, descriptions of Rome during the Renaissance have a tenuous hold on accurately depicting the lived realities of the city. The construction of Rome is the theme of this case: both in the literal sense of its built textures and its more figurative meaning, namely, its construction in the imaginations of its inhabitants and visitors. We have attempted to craft a narrative of Renaissance imaginations of the city, a narrative that here begins with studies of the ancient buildings and their smallest components, such as the Pantheon and the Colosseum, and culminates in a more modern city of the Catholic faith, embodied by the extravagant Saint Peter’s Basilica.

To truly understand Humanistic Rome – in which the trademark value was an idealization of the past and the practice of restructuring it to better fit the present – it is important to consider not only the physical space of its construction but also the abstract sense of space that represents where humans stand. Right now, in this very room in Rauner Library, you can look up at its Palladian columns and feel an instant connection to Rome, where identical columns were utilized in the construction of its majestic buildings.