The Body: Depressed, Flayed & Stolen From the Grave 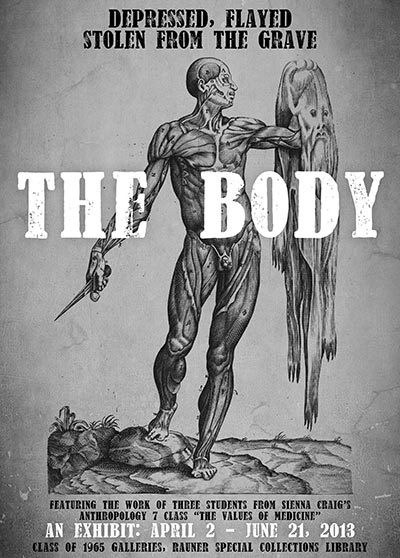 What do Renaissance artists and anatomists, Dartmouth medical students at the turn of the 20th century, and Robert Burton’s famous 1621 treatise The Anatomy of Melancholy have in common? They inspire us to consider the relationship between science, ethics, and humanism in the practice of medicine.

These student exhibits emerge from a First-Year Seminar entitled, "The Values of Medicine: Knowing Bodies, Forming Practitioners, Shaping Institutions." In this course, we use primary materials from the 16th – 21st centuries, located both within the Rauner Special Collections Library and at the Hood Museum of Art, to explore the cultural roots and contemporary expressions of medicine in Euro-American contexts. We contemplated themes of the body, personhood, and the medical gaze by examining 16th century anatomy texts and visiting the anatomy lab at Geisel School of Medicine. We considered what it means to be a “good” doctor by exploring LIFE Magazine photo essays. Midwifery textbooks spanning three centuries instructed us about the gendered nature of medical practice, and links between medicine and social inequality.

Students dove into materials which challenged them to look carefully and read closely across a range of textual and visual mediums. Their final assignment was to curate an exhibit of their own, on a topic of their choice. They rose to this challenge, bringing intellectual inquiry, creativity, and sophistication to the ways they told stories with and through such materials. In addition to the exhibits on display, other projects included: the social life of blood; artistic representations of the objectification of women; a history of Nathan Smith and the founding of Dartmouth Medical school; explorations of anatomical anomalies as "monsters and marvels"; and the collective, social illness narratives invoked by epidemics. At the end of term, all students presented their exhibits and then voted in support of their favorite projects. These three cases of student work emerged as exemplars.

The exhibition was curated by Caitlin Zellers '16, Lynn Huang '16 & Regan Haegley '16 from Sienna Craig's Anthropology 7 class "The Values of Medicine" and will be on display in the Class of 1965 Galleries from April 2 to June 21, 2013.

You may download a small, 8x10 version of the poster: ValuesOfMedicine.jpg. You may also download a handlist of the items in this exhibition: Values.

Case 1. Water Nymphs, Perturbations, and The Devil: Perceptions of Mental Illness Then and Now by Caitlin Zellers ‘16

Take a step back and really think about someone with a mental illness. Can you say that you could look at them in a completely objective way without letting emotion or social norms affect your viewpoint? With depression on the rise, prescriptions of pharmaceutical drug treatments increasing, and recognition of PTSD strengthening, mental illness today has become a prominent social and medical issue. Mental illnesses have always been in the social and medical fields of vision however they have not always been as widely understood and accepted. Today, mental disorders are seen as legitimate biomedical issues often caused by chemical imbalances or physiological defects. The social perception of mental illness had a strong influence in its diagnosis in the 17th century and although this influence has weakened over the last 400 years it has not entirely relinquished its grip. Although both lay and medical perceptions of mental illness have evolved over the past four centuries, it may be surprising to learn how much is still the same. Social perception was deeply intertwined in the way practitioners diagnosed mental disorders in the 17th and 18th centuries and in many ways this is still true today. How can society eliminate the stigma that still exists around mental illness and what will that do to the way doctors diagnose and treat these disorders?

Today, mental illness is generally accepted as a legitimate medical disorder diagnosed and treated according to biomedical standards. It wasn’t until the mid 20th century, however, that this mindset became mainstream. In the 1600’s disorders of the mind were labeled under many general terms such as “melancholy” or “insanity” and were often attributed to supernatural punishment or mystical mischief. Supernatural beliefs led society to believe that water nymphs, witches, and most importantly, the devil, caused most mental disorders. The level of biological knowledge about mental health remained low well into the 1800s as it was still seen as more of a socially based problem. The responsibility of treatment was largely placed on the patient’s personal isolation from societal pressures and their own desire to change. By the end of the 19th century, after the Enlightenment and Scientific Revolution, physicians began to explore physiological causes of mental disease, which eventually led to what would be known today as a more modern biomedical perception of mental illness in the mid 20th century. The medical world, however, still has much to learn regarding mental illness and society has yet to entirely give up the stigma that surrounds it. Mental disorders are often still considered a socially derived problem with no permanent biomedical solution. Although mental illness is not referred to as “lunacy” anymore, societal pressures and perceptions still prevent many cases from being properly diagnosed and understood – in either social or biomedical terms. Furthermore, the way in which physicians diagnose mental disorders has always been intertwined with religion and gender inequality. Today these pressures have changed but physicians are influenced nonetheless by social trends particularly those broadcast in the news media highlighting violence from the mentally ill and suicides.

Beginning with Michelangelo’s Sistine Chapel, the artistic depiction of the “Skin Man” has reappeared throughout the centuries.  In this original depiction, the Skin Man is hanging loosely, suspended in the air among other, more abled-bodies.  Inspired by this famous work, Andreas Vesalius was first to incorporate the Skin Man in his 1543 anatomical text, where the Skin Man proudly presents his skin, loftily held high.   In the other hand, he casually holds his shearing knife, implicitly from his self-skinning. He proudly presents his powerful, still-able body.  The Skin Man is reproduced by modern methods using a donated human cadaver for the educational Body Worlds exhibition.

Included in this exhibit, three renowned anatomy books by Andreas Vesalius, Johann Remmelin, and Juan de Valverde integrate humanity-oriented anatomy in educational texts over three centuries.  When posed in expressive positions, however, Body Worlds exhibits are criticized for appearing alive, even though this once was the widely accepted norm, even within professional medical textbooks.

What do we imagine when we hear the word “doctor”?  A neat man in a white coat? A respected healer who saves lives? During the 19th and 20th centuries, when medicine was professionalized in schools and residency programs, the term “doctor” carried darker meanings. Medical students, unable to procure enough bodies for dissection, took to body snatching. In fact, medical schools often turned a blind eye to such nighttime raids. Digging up the dead was a natural prerequisite to healing the living.

Today’s medical students may have moved beyond the grave, but does this shift to legitimate procurement of cadavers make it any easier to cope when they first cut into human flesh? Human corpses and body parts have always held material value: shrunken heads as trophies of war, deformed skeletons as curios. [1] In fact, grave robbing, the practice of stealing valuables from graves, has been a part of human society as long as burial has—recall the tombs of Egyptian pharaohs. The richer the deceased, the bigger the payoff from grave robbing.

Body snatching, the theft of fresh corpses, is closely related to grave robbing. However, whereas grave robbing capitalizes on the body’s possessions, body snatching directly commoditizes the body. Instead of targeting the rich, body snatching focused on corpses belonging to those that would not missed: criminals, paupers, African Americans. The more wretched the deceased, the smaller the risk from body snatching.

Although stolen bodies often belonged to outcasts, some famous cases caused public outcry. In 1878, the body of Senator John Scott Harrison (son of President William Henry Harrison) was discovered by his nephew and son at Ohio Medical College. [2] In the Resurrection Riot of 1788, a mob hungry for medical students swept New York. Medical professionals had to carefully maintain a public persona opposed to body procurement, despite a pragmatic private side that accepted, even encouraged body snatching. It was not until the legalization of human dissection and the establishment of gift programs that medical students gave up body snatching.

Today, students only dissect unclaimed bodies or bodies voluntarily given to science. Medical schools try to prepare students for the first cut, and yet it remains an intensely intimate moment each student must learn to cope with. Even in death, the human body endures as an inviolable, sacred part of self.