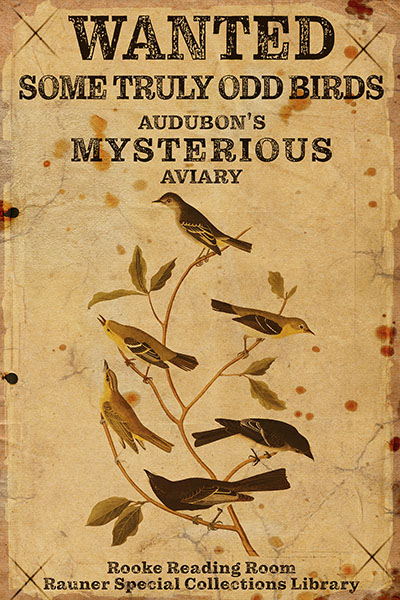 John James Audubon (1785-1851), the well-known 19th-century American naturalist, painted species in his masterpiece The Birds of America (1827-1839) that no one has observed since. In this exhibit, we explore these avian oddities and examine the possible origins of his famous ‘mystery birds’.

Although 19th-century illustrators often worked from taxidermied specimens, Audubon devised a new method of rigging dead corpses of birds he or others had recently shot using bent wires inserted into the bird’s body. This better-preserved their colors while allowing him to paint birds in more ‘lifelike’ positions. Publishers likened Audubon’s method to ‘drawing directly from nature’, bolstering the success of his book as he sought paying subscribers to fund his endeavors. Indeed, advertisers commonly implied that Audubon’s work was somehow superior in its accuracy and scientific depiction of the natural world because of his painting process. This assumption of scientific accuracy is evident in our rare copy of the 1826 prospectus (above) advertising Audubon’s upcoming book, The Birds of America,  wherein renowned naturalist W. Swainson attests, “To those who have not seen any portion of (Audubon’s) splendid Collection of original Drawings, it may be proper to explain that their superiority consists in every specimen being of the full size of life, portrayed with a degree of accuracy…(Audubon & Wilson) contemplated Nature as she really is...the observations of such men are the cornerstones of every attempt to discover the natural system.”

Audubon’s befuddling “Carbonated Swamp Warbler” - appears on Plate 60 of Birds of America. Named for its dark streaking and head cap - not, unfortunately, because it lives in a bubbly bog - Audubon painted his S. carbonata from two males shot on his father’s plantation in Kentucky. Audubon expressed uncertainty about their strange coloration, noting on page 308 of his Biography (Vol. 1) that he was “of the opinion that they were each young birds of the preceding year, and not in full plumage.”

The verdict: The cap, wing bars, and general streaking pattern match the common Blackpoll Warbler, however Blackpolls are black and white, rather than bright yellow. Blackpolls do exhibit surprising color variations including yellow-tinged wings and backs, meaning Audubon’s S. carbonata could be a rare yellow mutant. A more likely explanation some contend - including field guide author David Sibley (creator of Sibley’s Field Guides) - is that Audubon mis-represented a bird he’d re-drawn from memory, after some of his works were destroyed by rats in 1812. As Sibley noted, “We know that Audubon worked on some paintings from memory at that time, and I think this painting is consistent with ‘from memory’ work.”

The mysterious case of Audubon’s “Townsend’s Bunting/Finch” (E. townsendii) - recently came to a close, all thanks to a sharp-eyed birdwatcher. Audubon remarked in the first volume of his Biography, “Of this species only a single specimen has yet been found, which was lent to me by Dr. Townsend… Nothing is known of its habits” (90). The bird was built like a sparrow with a conical bill but had a white throat and “eyebrow” in addition to a gray chest unlike any known sparrow species.

The verdict: Unlike Audubon’s other five mystery species, the specimen he painted still exists. The stuffed bird sat in the National Museum of Natural History for over 160 years, until ornithologist Kenneth Parkes studied the specimen and consulted with Townsend’s notes; concluding it was an aberrant-plumaged Dickcissel that “lacked the normal carotenoid (yellow) pigments in its plumage…such pigment deficiencies, result from mutations or failures in development” (Natural History 4/85). Parkes hypothesized that Audubon stumbled upon a once-in-a-lifetime specimen that could not process and/or store carotenoids (pigments obtained from berries or other foods in the bird’s diet) in its feathers. Following Parkes’ tentative conclusion, the birding world erupted with excitement when images of a supposed Townsend’s Bunting captured in Ontario confirmed his findings in 2014. Although we’re now certain E. townsendii was never a distinct species, it’s a truly remarkable bird - only observed twice in nearly 190 years.

Arguably the most perplexing species in Birds of America is the Blue-Mountain Warbler (Sylvia montana). This “rich yellow” songbird likely owes its presenceto another naturalist, Alexander Wilson. Wilson included the warbler in his groundbreaking work- American Ornithology - published twenty years prior, in 1808. Although Wilson died in 1813, Audubon’s work was continually compared to his predecessor's (as evidenced in his prospectus), which many bird enthusiasts - and hence potential subscribers to his own work - were already familiar with. To omit a species from his book that a supposed authority like Wilson had observed- whether real or not- could prove disastrous to Audubon’s reputation. Hence, Audubon likely faced pressure to include some species he himself never encountered. Indeed, Audubon expressed frustration about being unable to obtain the S. montana for himself, writing that, “it is somewhat strange, that…it has not been my good fortune to meet with (a Blue Mountain Warbler)”. Wilson claimed to have shot his warbler in Virginia’s Blue Mountains, but a combing of the region by Audubon and his colleagues yielded no species matching its description. So, where did Audubon supposedly acquire a specimen? Audubon oddly remarks that his “figure was taken from a specimen lent to me by the Council of the Zoological Society of London, and which had come from California.”

The verdict: It’s possible Audubon had only Wilson’s painting of the Blue Mountain Warbler to reference, and, being unable to find a specimen for himself, felt compelled to paint an unknown bird only documented in Wilson’s book.

The origin story of Audubon’s mysterious Small-headed Flycatcher is the reverse of the Blue-Mountain Warbler (see above). Audubon claims he discovered the species first but did not reveal his findings because “In those happy days... I thought not of the minute differences by which one species may be distinguished from another” (pg. 291, Vol. V). Audubon remarks that he first drew the species in Louisville Kentucky in “long-past days… (in) the early part of the spring of 1808” (conveniently the year before Wilson published his work!). He contends that “When Alexander Wilson visited me at Louisville, he found in my already large collection of drawings, a figure of the present species, which, being at the time unknown to him, he copied and afterwards published in his great work, but without acknowledging the privilege that had thus been granted to him.” Audubon expresses contempt for the plagiarism of his discovery, noting “I have more than once regretted this.” Meanwhile, Wilson claimed he’d first seen a flock of the birds in New Jersey, having shot one in an unnamed orchard.

The verdict: Unfortunately, neither of these stories sheds any light on what these birds actually were. Audubon and Wilson’s descriptions connote a wood warbler, but the coloration doesn’t match anything known today. As Elliott Coues suggested back in 1870, the Small-headed Flycatcher likely never existed, but was rather a result of rivalry and misunderstanding between the two men.

A Field Guide to the Birds of Eastern and Central North America - published in 1934, was the first book authored by famed ornithologist and artist Roger T. Peterson, and is also considered to be the first modern field guide complete with identification pages, diagrams, and distinguishing characteristics to help novice birdwatchers correctly identify birds. The book was immensely popular, selling out its first 2,000 copies in one week and subsequently going through 6 editions. Look closely, and you’ll notice Peterson’s signature and a personal note which is inscribed on the second page of our first edition.

Equipped with a gun, spyglass, and his watercolors, it’s remarkable that Audubon accurately described and painted over 400 American bird species (many for the first time) without the assistance of guides like Sibley’s. As Dr. Roberta Olson, Curator of Drawings at New York’s Historical Society remarked, “The presence of a few mystery birds in (Audubon’s) work is a testament to the kinds of challenges that the artist-naturalist faced in his pioneering attempt to study and codify taxonomically hundreds of American birds in this pre-photographic age.” Even when his work wasn’t scientifically accurate, Audubon’s illustrations ignited considerable interest in American birdlife, inspired future generations of artists and birders like Sibley, and helped spur the modern age of wildlife field guides.