Shelley's Frankenstein in Text and Image 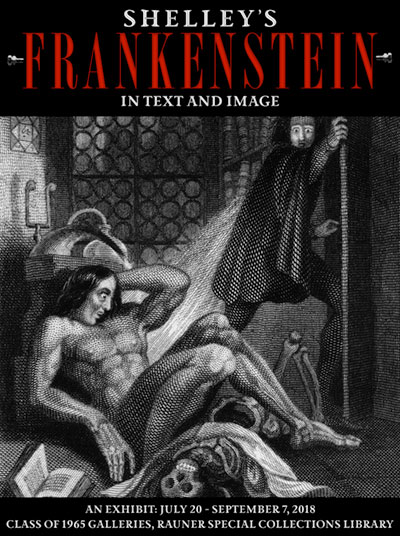 This year marks the 200th anniversary of the first printing of Mary Wollstonecraft Shelley’s first novel, Frankenstein; or, The Modern Prometheus. Shelly began writing the novel when she was eighteen years old, in 1816, after a visit to Lake Geneva with her lover and future husband Percy Bysshe Shelley and Lord Byron. Both men were highly influential figures in the Romantic literary movement in England, which itself was an inspiration to Mary Shelley and her writing. While at the lake, Shelley had a “waking dream” in which she imagined Victor Frankenstein bringing his monster to life. Two years later, her nightmare became a story that has fixated and entranced readers ever since.

Today, Frankenstein continues to influence and captivate generations of readers and writers. Over the last several centuries, the book has been called a Gothic novel, an important text of the Romantic movement, and even the first true science fiction story. The character of the monster, in particular, has endured numerous interpretive representations, each one saying more about the culture in which it appears than the monster himself. This exhibit is both an exploration of the novel’s influence on society but also the texts and works that influenced its creator.

Mary Shelley was born 1797 to Mary Wollstonecraft and William Godwin. Mary’s mother, Mary Wollstonecraft, was a powerful advocate for women’s rights and is best known for her novel A Vindication of the Rights of Woman, published in 1792. Her mother died a month after Mary was born and she was raised and educated by her father, a political philosopher who became influential in the late 1700s and early 1800s for his attacks on aristocratic privilege and his support for anarchism. These positions gained him a following of radicals in London who were discontent with the excesses of the aristocracy; among them was a young poet and major English Romantic poet, Percy Bysshe Shelley.

It isn’t hard to imagine that the works of Godwin, Shelley, Wollstonecraft, and other philosophical and political figures of the day must have left an impression on the developing mind of a young intelligent woman. The feminist heritage of her mother, combined with the politically chaotic ideas of her father, were further developed during her interactions with the Romantics. Whether the themes she promotes in Frankenstein are a continuation of those ideas or a refutation of them is up for debate; what is evident is that Shelley’s work owes a debt to the exciting literary, political, and scientific ideas that were in play during the years when she was drafting her novel.

Given Shelley’s lineage, husband, and social circle, it should come as no surprise that books are as important to her characters as they were to her. Early in the novel, Victor Frankenstein falls under the influence of alchemical and pseudo-scientific writings that he later denounces when at university in favor of studying life sciences. However, it is possible to see alchemy, life science, and Victor’s eventual discovery of the secret of reanimation as stages in the development of the field of science.

In contrast, Frankenstein’s monster turns to literature as a means of understanding the world around him. In Victor’s abandoned coat pocket, he discovers several texts that Victor must have been reading but, curiously, had never mentioned. Among them are John Milton’s Paradise Lost, Johann Wolfgang von Goethe’s Die Lieden des Jungen Werthers, and Plutarch’s Lives of the Noble Greeks and Romans. These texts constitute a virtual required reading list for anyone interested in the Romantic literary movement.

The current incarnation of Frankenstein’s monster, which has been made popular by Boris Karloff’s rendition in movies, Halloween costumes, and even breakfast cereal, is one that is immediately recognizable to most of us raised in the West. The influence of Shelley’s Frankenstein persists in Western culture today through parodies, popular reimaginings, and also new printed editions of the novel that suggest that the text is now a part of the Western canon.

Why has Shelley’s Frankenstein, and the character of the monster, endured in popular culture for so many years? One scholar, Susan Tyler Hitchcock, has argued that the novel employs two “archetypal myths that are essentially human”: one that rewards people for taking risks and crossing boundaries, and one that punishes those who transgress societal norms and stray too far into the unknown. We as humans are fascinated with our capacity for discovery and invention, but we are also fearful of losing control.