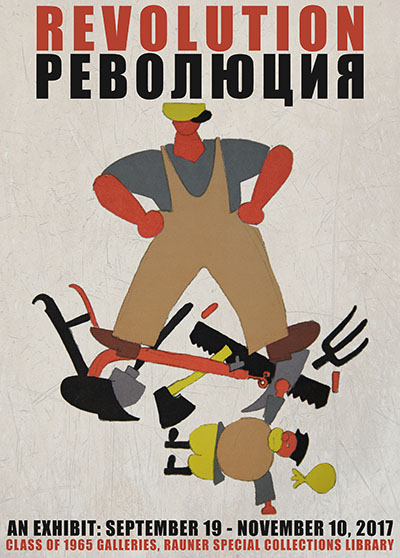 One hundred years ago, the October Revolution initiated a social and political experiment that unleashed waves of hope, optimism, angst, and horror across the globe. The initial excitement of artists and intellectuals eager for a new world turned to despair as the realities of a new form of tyranny became manifest.

“Revolution!” draws on Rauner Library’s rich collections to show how the products of the Russian Revolution expressed the varied reactions to the rise of communism.

The exhibit was curated by Jay Satterfield and Wendel Cox will be on display in the Class of 1965 Galleries from September 19th through November 10th, 2017.

You may download a small, 8x10 version of the poster. You may also download a handlist of the items in this exhibition: Revolution!

The Russian avant-garde felt an initial freedom from what they saw as the stultifying effect of bourgeois patronage. Artists saw their roles changing directly after the revolution. Many embraced the ideals of communism and sought to create an art form that was “from” the proletariat. The results were an odd mix of propaganda and some of the most innovated designs of the early 20th century. As the realities of Soviet oppression set in, what once appeared to be spontaneous, unbridled expressions of freedom became complicated by a complicit support for a tyrannical regime. It had the air of propaganda all along, but it transformed from propaganda created out of a sense of hope, to propaganda selling a false promise.

Two of these books are designed to inspire the world through an aggressive assertion of the economic benefits of communism. The Struggle for Five Years in Four uses “Isotypes” to present data visually and graphically express economic progress. Artist Aleksander Rodchenko uses related constructivist techniques in Ten Let Uzbekistan to show the benefits of Soviet rule.

Throughout Stalin’s programs to eliminate undesirable elements of society, Rodchenko maintained a copy of his work on Uzbekistan. He used India ink to erase from history those murdered by Stalin. When artist Ken Campbell found this defaced copy in the 1990s, it inspired his monumental tribute to Rodchenko that captures the despair wrought by a brutal regime.

The Soviet Union was a source of hope to millions around the world, many of whom saw in the Russian Revolution a vision of their own future. Some Americans, like the novelist Theodore Dreiser, traveled to Russia and reported positively on their experiences. Revolution was also exported in print and image. The works of Lenin were available in inexpensive editions which, in some instances, found their way into the hands of young revolutionaries, including Dartmouth’s Budd Schulberg, who would later be a friendly witness for the House Un-American Activities Committee and win an Academy Award for On the Waterfront. Even works originally intended for street display, like placards created for the Russian Telegraphy Agency, might be offered as revolutionary visions for Anglophone and Francophone nations and their colonies. Others, like the acclaimed and widely-influential Russian poet Alexander Blok, presented a more ambivalent vision which offended both revolutionaries and reactionaries alike.

There are many accounts of 1917, whether prepared by eyewitnesses or offered after the fact. Revolutionaries and reactionaries alike wrote for posterity, to persuade, and to rally their allies and reveal the crimes of their adversaries. Americans John Cushing Varney and Thomas L. Cotton interspersed quotidian and historic events in their accounts of 1917, while the American journalist John Reed rhapsodized revolution and actively worked for its success. Others, like Socialist Revolutionaries Catherine Brezhkovsky and Isaac Nachman Steinberg, wrote of triumph, unease, and despair. Even a decade later, the effort to stage a play in London’s West End examining the Revolution might still earn the Lord Chancellor’s censure purportedly in part for its offense to the Russian émigré community.