Natural Philosophy in a Time of Revolution 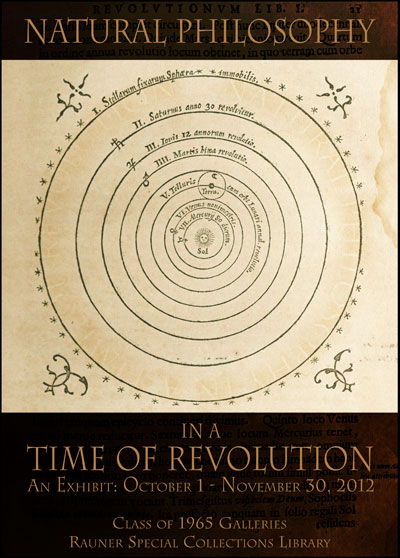 We tend to think of Religion and Natural History as separate fields of study, and for the most part they are in modern academic thought. But to most gentlemen scholars of the 15th and 16th centuries, Natural Philosophy was the pursuit of a keener understanding of God through a close study of the natural world. Pointed up to the sky or down toward the sea, the scientific gaze was often a religious act.

Scientific inquiry was complicated in much of Northern Europe by the religious revolution of the 16th century. Copernicus’ De Revolutionibus and Luther’s Reformation forced a change in thinking that helped usher in modern scientific inquiry, but which never seriously doubted the close relationship between Natural Philosophy and religion.

It was curated by Ilana Grallert and Jay Satterfield. This exhibition was on display in the Class of 1965 Galleries from October 1 - November 30, 2012.

Medieval science brought together a curious mix of the Christian theology, Greek and Roman thought, astrology, and Islamic scholarship. Mythology and belief systems usually trumped direct observation. In Ketham’s assemblage of medical knowledge Fasciculus Medicine. The human body was seen as a microcosm of the universe, with the figures of the zodiac residing within the individual shaping the application of medical treatment.

Case 2. The Reformation and the Cosmos

During the 16th century, Natural Philosophy increasingly turned to the scientific method and consequently pushed against church doctrine. Copernicus first published his explanation of the heliocentric universe in 1543, the year of his death, but he had been circulating the idea for nearly 30 years. As early as 1514, he distributed a pamphlet-sized manuscript laying out his views. Part of his motivation was to get the ideas out for critique, but he also knew just how inflammatory his theories would be. In 1543, Copernicus was persuaded to publish De Revolutionibus by German mathematician Georg Joachim Rheticus. There seemed to be some promise that the ideas might be better received in post-Reformation Germany. Ironically, it was the Protestants who reacted first and most critically, and only later did the Catholic Church censor the book.

While new scientific inquiry frequently ran afoul of church dogma, sometimes simply because it was being practiced by protestants, it was not placing itself in opposition to broader religious thought. By cataloging all of creation, it was reasoned, a deeper understanding of God’s will and wonder could emerge. Two of the greatest of these catalogers were Conrad Gesner and Leonhart Fuchs. Both were interested in describing life, Gesner the fauna, and Fuchs the flora, with an intense interest in the discoveries from the New World. Direct observation was taking hold, but it was an evolving landscape: Gesner relied on eyewitness accounts but also continued to privilege Pliny’s Natural History for evidence.