Moby-Dick, or, The Plurality of the Whale 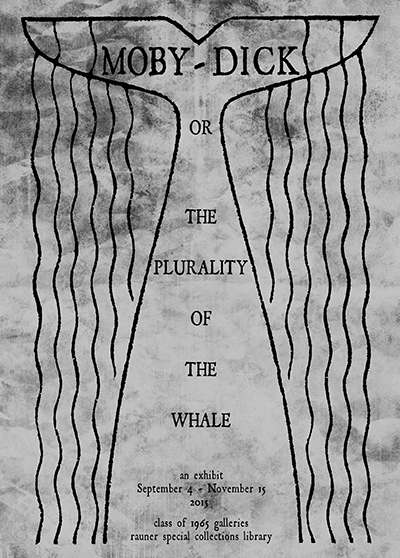 "Call me Ishmael." Even if you have never read Moby-Dick, chances are you know the first line and something about Captain Ahab's obsessive hunt for the white whale. The plot and key characters have become part of our popular culture and are referred to by people who couldn't tell you if Ahab survives his final encounter with the beast that took his leg.

One reason the novel has so thoroughly entered our popular imagination is because it is not really just one novel. Moby-Dick has been repackaged time and time again to serve multiple purposes and satisfy different audiences. It has been a muse for artists, a dry meditation on the human condition for students to suffer through, an exciting story of the sea, and an action story befitting of comic book heroes.

We invite you to "read" Moby-Dick through the lens offered by these editions from Rauner Library's Melville Collection. The story told is rarely the same.

The exhibit was curated by Bay ByrneSim ’15 and Jay Satterfield. The exhibit was on display in the Class of 1965 Galleries from September 4 to November 15, 2015.

You may download a small, 8x10 version of the poster: MobyDick.jpg. You may also download a handlist of the items in this exhibition: MobyDick.

Moby-Dick has spawned hundreds of illustrated versions, with most editions focusing on the danger and drama of the story or the literal business of whaling. But for some artists, the story of the white whale becomes a muse for adventurous art. The abstract renditions in this case tackle the larger questions of life, passion and ambition in Melville’s wandering interludes and digressions.

Case 2, Part 1. The Novel of the American Renaissance

Here is the book people dread. So long, so boring to look at, so canonical. Moby-Dick was a flop when it first came out. The English edition that preceded the American by a month relegated the extracts and the etymology to appendices and left off the crucial epilogue that explains how Ishmael survived to tell the tale. The influential British reviewers panned the novel, and it seemed doomed to obscurity. D. H. Lawrence helped to resurrect Moby-Dick in the 1920s in his essay on American literature and F. O. Matthiessen declared it a masterpiece in his 1941 American Renaissance. By 1950, Moby-Dick was on the syllabus in American Literature classes across the country and the world. To satisfy this new market, the college edition was born. Laden with scholarly apparatus, Melville’s novel is presented as dry, required reading.

A rousing good tale with exotic characters and locations, adventure, blood and violence: this story is good, and fun, too. Dynamic cover art tried to invite readers into the story by conveying Ahab’s madness and the whale’s fierceness. Melville’s meandering abstractness was deemed unnecessary to editors focused on enlarging the book’s potential audience. In many popular editions, the novel is stripped down to just the action scenes, in other cases, the novel is presented in full, but packaged and illustrated to accentuate the hunt.

Moby-Dick is not a children’s book, but it can be a children’s story. Stripped of the novel’s philosophical digressions, Moby Dick becomes a mean and evil whale chased by a righteous Ahab. These simplifications have broader ramifications: Melville’s atmosphere of ambiguous and fluid sexuality is abandoned to reinforce social norms. The children’s books construct the story as a hypermasculine adventure tale for boys to share with their fathers, marketed alongside other male-centric works such as Robinson Crusoe, Treasure Island and The Last of the Mohicans.