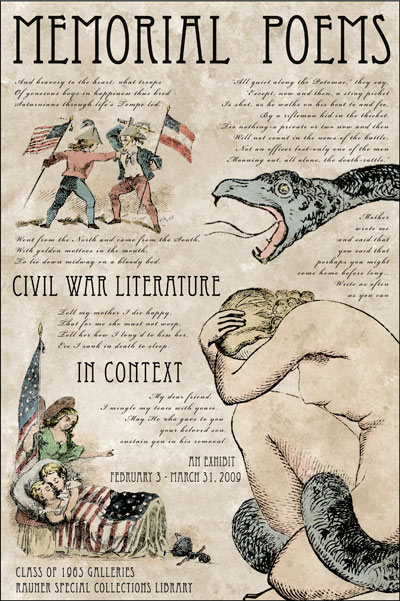 Although Walt Whitman famously claimed that “the real war will never get into the books,” the American Civil War did in fact call forth a vast range of literary responses, in genres as diverse as poetry, popular song, novels and other prose genres.  How does this literature depict the war, and how does it grapple with Whitman’s claim that there is something unrepresentable about the war’s carnage?  In Fall, 2008, we explored these questions in an upper-level seminar, English 71: The Civil War in Literature (Professor Colleen Boggs), which fulfilled the “culminating experience” requirement in the English major.  Students explored primary texts in the classroom and beyond: each student developed a research project that contextualized the literature we had studied by drawing on primary materials from special collections and the college archives.  The work of three students -- Virginia Deaton, Nicole LaBombard, and David Schmidt -- is displayed here; it represents their original research.

The exhibition was created and installed by Virginia Deaton '09, Nicole LaBombard '09, and David Schmidt '09 and was on display in the Class of 1965 Galleries in Rauner Special Collections Library from February 3 to March 31, 2009.

You may download a small, 8x10 version of the poster: MemorialPoems (2.4 MB) You may also download a handlist of the items in this exhibition: Memorial Poems.

Case 1. The Home Front: The Dartmouth Experience In the War

The literature and consumer culture of the postwar years reflects the social upheavals taking place in the newly reunited nation, from the enormous loss of life and limb during the war, to women’s increased freedom during the war years, to the debate over the rights of newly freed slaves. Songs, poems, and images produced for public consumption dealt with the losses suffered by Americans, but many did this in a way that hearkened back to prewar ways of thinking. Though material culture of the time may have vacillated between the old and the new, the suffering brought on by the war made the return to pre-Civil War America impossible.

Case 3. Remembering a New Hampshire Soldier: Private Words for the Brother and Public Texts for the Hero He Was to Become

Haldimand Sumner Putnam was a Civil War Soldier, mortally wounded in July of 1863 during an attack on South Carolina’s Fort Wagner… 1,000 miles from his home in Cornish, New Hampshire. To the public Colonel Putnam was a martyr, an American hero, and the epitome of all things glorious and honorable. To his youngest sister, Lucy, he was the judge of her latest photograph and contributor to her flower collection. To the media, Putnam was a leader and role model for all young American boys. To his own brother, Samuel, he was the one to lend an ear to complaints of sisters and boyhood woes.
Nineteenth-century popular culture was all too eager to memorialize soldiers like Haldimand in a grandiose and sentimental fashion. Public texts speak of deeds on the battlefield and unparalleled achievements, turning these men into heroes unrecognizable to their families back home. Fortunately, letters survive that succeed in bringing the private sides of these soldiers to light—through the written words of those who loved them best. Haldimand Sumner Putnam was a brother as well as a soldier. Just ask Belle, Lucy or Samuel. And perhaps their letters’ shaky penmanship and poor spelling speak more to Haldimand, the man, than any printed text.