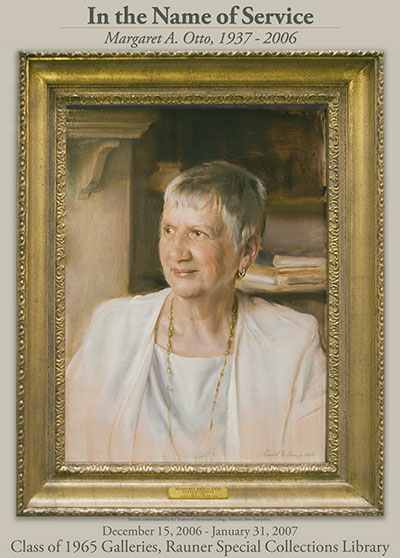 Margaret A. Otto's legacy surrounds us. As the first woman to lead the Dartmouth College Library, she oversaw an extraordinary period of expansion, building, and technological innovation. Her leadership ensured the continued viability of the Library as an intellectual and social center of campus.

Ms. Otto came to Dartmouth from MIT in 1979 as the 16th Librarian of the College. Within a few years of arriving, she ushered Dartmouth into a new era of digital access with the creation of one of the nation's first online library catalogs. For her, digital access was simply a tool - not an end in itself - for enhancing the strong service ethic she was determined to establish in the Library. Service demanded new spaces that could cater to the changing needs of the community. Her tenure saw a number of major library building projects including: the construction of both the Matthews-Fuller Biomedical Library at Dartmouth-Hitchcock Medical Center and Berry Library on the campus in Hanover; the renovation of Webster Hall for the Rauner Special Collections Library; and the expansion of the Paddock Music Library. She also understood the historic importance of the library's collections, creating a preservation department to ensure their long-term conservation, and overseeing the acquisition of the two millionth volume to the collection.

Margaret Otto will be missed by all who knew her, but for all of us, her life's work is here each day as a part of what we know as Dartmouth.

Potrait of Margaret Otto by Ronald Sherr, 2006. Commissioned by the Trustees of Dartmouth College. Courtesy of the Hood Museum of Art.

The two decades of Margaret Otto’s tenure as Librarian of the College were a period of great growth for the Library, in both the collections and the physical plant. She oversaw the building of three new libraries and the renovation of two others, as well as the planning and groundbreaking for Berry Library, a project that would double the footprint of Baker Library.

In 1979, Dartmouth became one of the first academic institutions to undertake the design of an online catalog. Through the 1980’s, Dartmouth’s various libraries began closing their card catalogs, and in 1991 no more catalog cards were added to any catalog on campus. With the contents getting more and more out of date, and less representative of the library’s holdings, the card catalog in the main corridor of Baker Library was removed.

Always with her mind on how best to serve Dartmouth College Library's large and varied constituency, Margaret Otto sought and respected the opinions of her colleagues.  Shown here are just some of the collaborative reports generated by committees and task forces charged with guiding the Library into the 21st century.
Looking back…one can see that Margaret Otto's insistence on constant examination of our policies, procedures, and stances on the issues of the day was a kind of navigation by her pole star, the view that library service is an immutable mission.
William Moran, "Margaret Otto and the Public Service Mission"
As Margaret Otto held up the vision of service to users and fostered the management environment in which individuals willingly aspired to such service, she is rightly to be credited with the esteem the Library holds today.
William Moran, "Margaret Otto and the Public Service Mission"