For those living in the Middle Ages, death was a constant presence: Plague, famine, war, and a lack of medical knowledge all contributed to high mortality rates among European medieval society, especially for those living in cities. Consequently, much of life was occupied by thinking about and preparing for death. The Church provided hope through its promotion of the afterlife, although the path to that blissful eternity was a narrow one. At the Final Judgment, upon the return of Jesus Christ, many souls would be forced into the mouth of Hell instead of being ushered into paradise. Given the inexorable approach of death, and the concerns of the living about what might come afterwards, many artists and authors from the Middle Ages to the present day have attempted to represent the lives and deaths of saints and sinners as well as imagining what life after death might entail. This exhibit explores representations of death and the afterlife, chiefly from medieval and early modern sources. It also displays various visual interpretations of Dante Alighieri's The Divine Comedy, arguably the most important work about the afterlife that has ever been written in Western culture.

This exhibit was installed to complement the 43rd annual New England Medieval Conference, which met at Dartmouth College on November 19, 2016. It was curated by Morgan Swan and was on display in the Class of 1965 Galleries from November 10, 2016, to January 27, 2017. 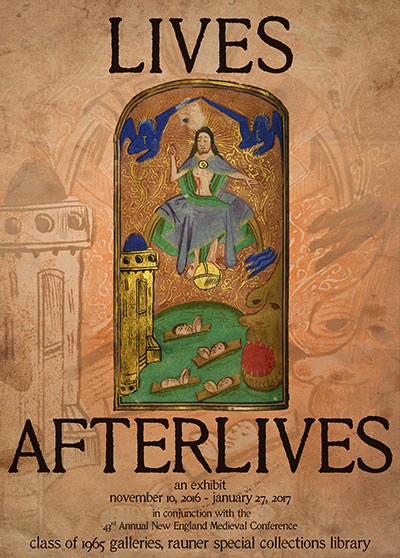 Case 1. Death and the Church in Fifteenth-century Books of Hours

The manuscripts in this case are all books of hours, a genre popular in Europe in the Middle Ages, especially during the 1400s. Most books of hours contain collections of texts, prayers, and psalms that follow a common format but can also be customized to include materials that have significance for their owner. Among the various texts that were traditionally present in books of hours was the Hours of the Cross, a text that tells a different stage of the life of Jesus Christ from his betrayal to his crucifixion to his entombment. Another common inclusion for books of hours was the Office of the Dead, a prayer cycle of the Canonical Hours. This office was primarily an act of private devotion intended to provide rest or solace for the soul of the deceased. Hand-illuminated illustrations from both texts are among the images displayed here.

Case 2. Dante's Vision of the Afterlife

The Divine Comedy, completed by Dante Alighieri in 1320, is one of the greatest works of world literature and has made a lasting impression on generations of writers and artists from Chaucer to Dalí. This case reveals the myriad visual interpretations of Dante’s masterpiece that were made by artists during the course of nearly five centuries, beginning with a woodcut image of Hell from an early 16th-century Venetian text and ending with Salvador Dalí’s vision of Dantean paradise.

Case 3. The Dance and Defeat of Death in Early Modern Print

The introduction of the printing press to Europe in the 1450s meant that all manner of texts could be disseminated widely across the West, including small devotional treatises as well as weighty historical tomes. This case demonstrates the range of materials concerned with death and the afterlife that circulated in the first hundred years of printing. A small book of hours printed on vellum, an Elizabethan book of prayers, and a 16th-century printing of Hans Holbein’s iconic images of the dance of death stand in marked contrast to the Nuremberg Chronicle, a massive history of the world from the Garden of Eden up until the year of its printing in 1499. Haunting visions of death leading members of society away to their inevitable fate are counterbalanced with a scene of the final judgment, when the dead will be raised from their graves and enter into everlasting paradise or eternal damnation.