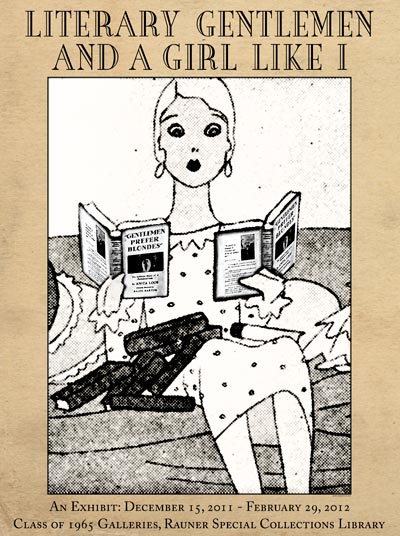 On a train ride from New York to California, popular screenwriter Anita Loos sketched out a farce based on a gold-digging blonde capable of manipulating any man she wished. Gentlemen Prefer Blondes: An Intimate Diary of a Professional Lady became the second best selling novel of 1926, and its first printing in December 1925 sold out overnight. This exhibit places Loos’s cultural phenomenon into the context of the literary world of the 1920s.


The exhibition was curated by Anne Peale and Jay Satterfield. This exhibition was on display in the Class of 1965 Galleries from December 15, 2011 - February 29, 2012.

Case 1. "Brains are really everything..."

On train ride from New York to California, Anita Loos sketched out a vicious farce based on a gold-digging blonde who spewed malapropisms but could manipulate any man she wished. Gentlemen Prefer Blondes: An Intimate Diary of a Professional Lady became the second best selling novel of 1926, and its first printing in December 1925 sold out overnight. It was a cultural phenomenon: adapted for Broadway and film in 1927, again rewritten as a vehicle for Marilyn Monroe in 1952, and translated into 13 languages.

Loos was a well-established screenwriter who worked on hundreds of scripts. She wrote for D.W. Griffith, was the primary writer for Douglas Fairbanks, and scripted many vehicles for the Gish sisters and Jean Harlow. She did not consider herself a novelist, and she had to stretch her original sketch of Gentlemen Prefer Blondes for serialization—penning the diary as it was coming out in Harper’s Bazaar. Loos realized she could be far more risqué in a novel than she was allowed to be in motion pictures. When the book was rewritten for stage and screen, many of the more explicit references had to be dropped.

Anita Loos has offered varying accounts of her inspiration for Gentlemen Prefer Blondes, but the most repeated account is that Loos was frustrated by a seemingly intelligent man stricken by a “witless blonde” (rather than herself). Loos said her anti-heroine, Lorelei Lee, was modeled after “the dumbest blonde of all, a girl who had bewitched one of the keenest minds of our era—H.L. Mencken.” In 1925, Mencken was at the height of his career: after editing The Smart Set, he helped to found The American Mercury, perhaps the most influential magazine of culture of its day. As a famed critic of Philistine American culture (what he called the “Booboisie”), his critical voice dominated American letters of the time.

Mencken’s ego was apparently strong enough to take the attack on his taste in women. He read a draft and recommended that Loos seek publication in Harper’s Bazaar. He was afraid it would “affront” his American Mercury readers because, as he said to Loos, “you’re the first American writer to ever poke fun at sex.” When Gentlemen Prefer Blondes came out as a novel, Mencken published a short but glowing review in The American Mercury, confessing, “there are pages that made me stop reading to bawl.”

While many people think of Gentlemen Prefer Blondes as a piece of throw-away humor, it was closely associated with America’s finest new literary talent. Published by the flamboyant and controversial Horace Liveright, it joined what has been called the best publisher’s list of the 20th century. Besides Loos, in 1925 Liveright’s stable of authors included T. S. Eliot, Ernest Hemingway, Theodore Dreiser, William Faulkner, Ezra Pound, Robinson Jeffers, Sherwood Anderson, and Eugene O’Neill. James Joyce and Edith Wharton both loved the book, and Wharton praised it as “the great American novel (at last!).”

The “literary gentlemen” whose company Lorelei Lee enjoys ply her with jewels and money but also occasionally with books. Lorelei hunts eagerly for the “riskay” parts of novels, but passes on the actual chore of reading to her maid. Lorelei entirely misses the irony of her gentlemen friends’ literary selections—from Joseph Conrad to Benvenuto Cellini to Robert Service, every author who falls into Lorelei’s hands writes about a different kind of gold-digger.

Both Anita Loos and her readers in 1925 knew that the joke was actually on Lorelei for bothering to read at all—every literary work Lorelei encounters in Gentlemen Prefer Blondes was adapted for screen or stage in 1924.  All Lorelei had to do to pursue her literary education was to go to the theater!

The more “riskay” parts of Lorelei’s books fall victim to the Hollywood censor’s pen in their Broadway and film adaptations, but Lorelei doesn’t let her own marriage to weak-minded censor Mr. Spoffard keep her from continuing the “education” she receives from other gentlemen, literary or otherwise.