Light and Shadows in the Thirties

The 1930s were a time of political and economic upheaval, when nations questioned previous orthodoxies and experimented with new systems. Technological innovations led to decreased printing costs, and photographs permeated mass culture, from magazines to newspapers and books. Artists and authors from all political and national affiliations created books that presented photographs as sources of truth and authority. The photographic books in this exhibit capture the diversity of opinions and strategies during this pivotal decade, as each work aims to influence its audience through the power of the photograph.

In the United States, the twin catastrophes of the Dust Bowl and the Great Depression were the catalyst for sobering tomes that claimed objectivity, while other photographers captured the promise of technology and the hope of the irrepressible American spirit. National Socialists in Germany produced books that created a personable view of their leader Adolf Hitler and, in publications from the Soviet Union, photographs represented the industrial successes of the workers’ state. Travelogues glorified distant regions, despite the twin threats of industrialization and imperialism in the heady final years of the 1930s. All these books testify that photography was not bound to one ideology—the camera captured both light and shadows. 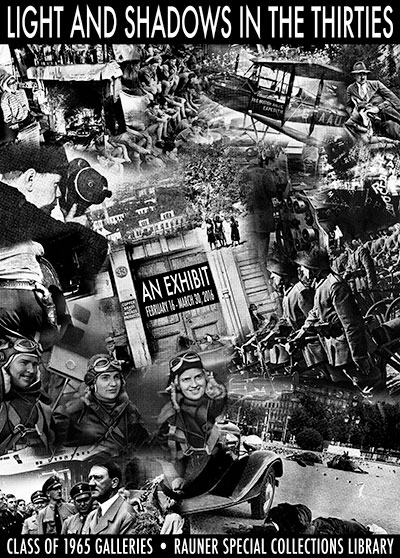 You may download a small, 8x10 version of the poster: Light-and-Shadows.jpg. You may also download a handlist of the items in this exhibition: LightandShadows.

Case 1. Truth and Tension in the United States

The ecological collapse of the Dust Bowl exacerbated the economic catastrophe of the Great Depression in the United States in the 1930s. In 1935, Roy Stryker at the Farm Security Administration (FSA) employed photographers to capture the hopelessness of the nation. Despite a pretense of objectivity, photographers often staged photographs or used artistic cropping to create sympathy. These photographs were appropriated and published in newspapers and books as true documents of the suffering of the American people—and they were, in some sense, true.

However, others believed that American innovation and perseverance would conquer the Depression, and presented that perspective in a number of positive photobooks. The people would not be disheartened: the bright lights of New York City still shone and Boy Scouts still hiked and camped. Technology held the key to a more prosperous future at the 1933 Chicago World’s Fair. The contrast between hope and despair presents the promise of photography to capture reality—but only a slice of it, and only for one moment.

The economic and social catastrophes of the early 1930s led nations to question the old orthodoxies of laissez-faire capitalism and liberal democracy. Two nations in particular were examples of alternative structures during this time—the Union of Soviet Socialist Republics (USSR) and Nazi Germany. The USSR was a communist state where industrialism flourished after the revolutionary woes of the 1920s, despite the global suffering of the Great Depression. Adolf Hitler, the newly appointed German chancellor, was wildly popular for his success in combatting unemployment and his powerful nationalist rhetoric.

These nations presented new economic and political visions, but those visions differed greatly. The Soviet Union presented itself as a communist utopia—the success of heavy industry was the ultimate goal. Nazi Germany reserved its adulation for Adolf Hitler himself; even books produced in other countries obsessively focused on Hitler. Both regimes produced photograph-based propaganda to promote their economic and political systems, obscuring the dark realities of famines, massacres, and concentration camps.

Case 3. Of Travelogues and Technology

With airplanes, steamships, and cameras, the world was growing smaller in the 1930s. Photography brought foreign landscapes and peoples into the hands of Londoners and New Yorkers, who could travel to the Arctic and Eastern Europe without leaving their favorite armchairs. Travelogues from this decade emphasize prosperity and encourage tourism despite growing tensions around the world.

From the Spanish Civil War to the invasion of Poland, photography also captured the violence and glory of industrialized warfare. The coexistence and mingling of these genres speaks to the greater ambivalence about the role of technology—including photography—in capturing, preserving and representing the modern world.