The King's English: The 400th Anniversary of the King James Bible 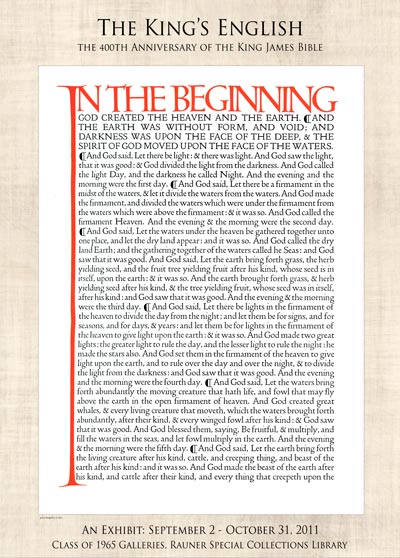 2011 marks the 400th anniversary of the King James Version of the Bible. Rauner Special Collections Library owns one leaf from the original 1611 edition and many other distinctive examples of Bibles published both before and after 1611.

The exhibit was curated by Anne Peale '11 and Eric Esau and will be on display in the Class of 1965 Galleries from September 2 to October 31, 2011.

You may download a small, 8x10 version of the poster: KingsEnglish.jpg. You may also download a handlist of the items in this exhibition: KingJames.

In 1604, King James I of England commissioned a new translation of the Bible with the intent to create a single, unified text which would mediate between the divergent religious views of Puritans and Anglicans. Forty-seven scholars worked for seven years to produce the translation, souring Greek, Hebrew, Aramaic, and Latin texts as well as earlier versions. The resulting Bible was a truly authoritative English translation.

Case 2. The Bible Before the King James Version

The King James Bible declares on its title page to be "translated out of the Originall tongues: & with the former Translations diligently compared and revised." James' translators consulted many texts from the great wealth of biblical scholarship available to them. During the 15th and 16th centuries, the active development of both the printing press and Protestantism provided the impetus for the production of many new editions of the Bible.

In print for four years, the King James Bible has appeared in many difficult physical forms. James's Bible was conceived as a large volume intended for public worship, but its many editions have demonstrated its adaptability to a variety of purposes. Each edition reflects something about the lives of the individuals who produced and used the King James Bible.