Making your point, getting your ideas across and advertising your views, is as old as politics itself. In light of the current campaign season, and ever-present political protests, here are some examples of political advertising (and criticism) as well as Dartmouth related political activism drawn from our collections.

Materials have been gathered from a number of collections within Rauner Library including the E. H. Young Collection on the 1952 Eisenhower presidential campaign in New Hampshire; The Ralph E. and William W. Becker Collection of American Political Campaign Materials; The papers of William Dunfey, Rauner Library's three dimensional realia collection, as well as the photographic and vertical files of the college archives. 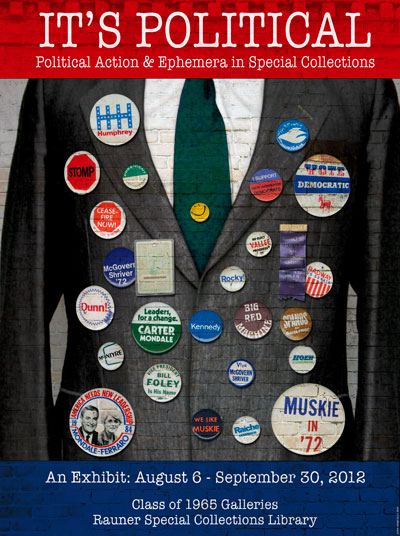 You may download a small, 8x10 version of the poster: ItsPolitical.jpg

Dating from William Henry Harrison’s election as 9th President of the United States in 1841, these items represent a variety of winners and losers of presidential contests and feature formats that are both familiar and alien to today’s campaigns. Included here are prints by Currier and Ives for Henry Clays third failed attempt at the highest office in 1844 as well as John Fremont’s failed attempt against James Buchanan in 1856. The Chicago Convention spread details Lincoln’s perceived failure to lead the country during the Civil War, but it was McClellan who failed to win the presidency in 1864. Cleveland won his first contest against Blaine and Logan in 1884 and managed to be elected again in 1893. The cartoon from Judge reminds us that history repeats itself; the issue of campaign finance is clearly not a new one.

We’ve come along way baby! Or have we. Surprisingly little appears to have changed since the 19th century in terms of political advertising. There are bumper stickers, but bumpers weren’t invented until the 20th century either. While one might think the lighter represents a big change, you would be wrong. Buttons, parade lanterns, ribbons, flags, banners, whiskey bottles, neckties, thimbles, handkerchiefs and bandanas, board games, and hats were all used in the early years. Even the emery board, that caters women voters, is not new. Despite not having the vote, campaign thimbles have been around since the early 20th century. Dartmouth Political Activism

In 1967 George Wallace Governor of Alabama, making his second presidential bid, visited Dartmouth College. Wallace was running on the American Independent Party ticket. As part of his visit he spoke in Webster Hall, which was an auditorium at that time. During his speech a group of Black students held up banners and signs to protest his racist stance. A group of supporters held up the Confederate flag. Following his speech a large part of the audience surrounded the Governor’s car in front of Webster Hall  and refused to let it move, while slamming their hands on the hood and roof and rocking the car, until police moved in to disperse the crowd.

In the spring of 1969, unrest was in the air and riff on college campuses. Dartmouth was no exception. On May 6, 1969 the Dartmouth chapter of Students for Democratic Society (SDS) staged a protest that resulted in the takeover of Parkhurst Hall. A group of about 30 students, and others, evicted the President and deans, along with their staff form the building. The group was protesting Dartmouth’s affiliation with ROTC, which they saw as institutional support for the war in Vietnam. They demanded an immediate end to ROTC on campus—the administration had already stated it would end the program in three yeas. The College called in the state police and all of the protesters were arrested and sentenced to 30 day in jail. The Dartmouth students among them were also suspended for one year.

In November of 1985 the Dartmouth Committee on Divestment erected four shanties on the Green as a way to illustrate the living conditions of black South Africans under Apartheid. The Town considered the shanties illegal, but when they moved to destroy them, students rose up and blocked the town workers. On a night in February 1986 a group of students calling themselves the Committee to Beautify the Green attacked the shanties with sledge hammers and destroyed three of them be for the Hanover Police stopped them. This ignited a student protests and 175 students then occupied Parkhurst in protest of what they considered intolerant actions.