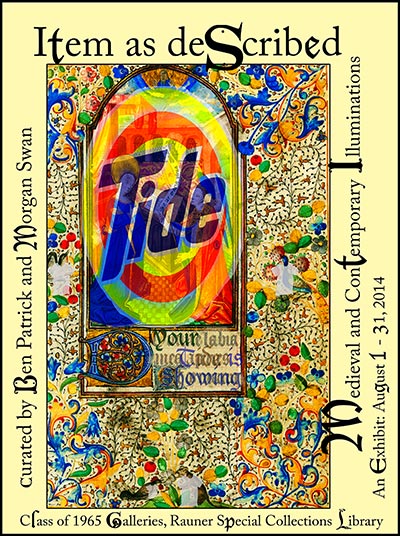 “Item as deScribed” is an artistic exploration of medieval illuminations by Ben Patrick, chair of the Visual and Performing Arts programs at Vemont Commons School in South Burlington, Vermont. The inspiration for this exhibition originated from a field trip to Rauner Special Collection Library with a group of seventeen VCS art students. The concept for the exhibition involves language, media, and iconography, as well as the parallels and differences involving medieval and contemporary lexicons. In the process of examining these relationships, Ben has experimented with a wide range of materials: calfskin vellum in multiple ink jet printers and heat presses; lapis lazuli in petroleum distillates; and 24k gold (carefully painted on the halo of the Virgin Mary). Ultimately, these investigations seek to demonstrate that our illuminated text and icons, and our need to communicate with them, have not altered significantly over the last thousand years.

The exhibition is divided into three parts, each juxtaposing old and new media (and materials). It is the artist’s hope that this exhibit will shed light upon the timeless currency of ‘language’ in all of its processes, materials and meanings. Like the students and artists at Vermont Commons School, to whom this exhibition is dedicated, Ben also hopes that this current show will “inspire in others the restless, curious, always questioning tides of the creative process.”

Ben Patrick graduated from Saint Michael's College in 1998 with a BA in Fine Arts and from Pratt Institute in 2004 with an MS in Art Education of Art and Design. He has been the Artist in Residence at Vermont Commons School since 2004, where he designed the Visual Arts Program, which unites media, concept, and studio application.

The exhibition was curated by Ben Patrick and Morgan Swan and will be on display in the Class of 1965 Galleries from August 1 to 31, 2014.

You may download a small, 8x10 version of the poster: ItemAsDescribed.jpg. You may also download a handlist of the items in this exhibition: deScribed.