Is Not My Word Like Fire? Eleazar Wheelock and the Great Awakening

The Great Awakening, a religious revival that began around 1741, enflamed church and civil life in New England. The revival's vision of personal piety and salvation challenged the delicate balance of Puritan life. It was seen by some as a remarkable work of God's Spirit; by others, an extreme threat to public order.

One key participant was a young evangelist and preacher who was a friend of Jonathan Edwards and pastor of the church at Lebanon Crank, Connecticut: Eleazar Wheelock. Wheelock's experience of the Great Awakening reveals its themes, its tensions, and the divisions it produced in New England. His story offers a glimpse into the revival that still colors political and religious visions today. And it was his personal experience as "a voice crying in the wilderness" that led to the establishment of Dartmouth College.

The exhibition was curated by Eliz Kirk, Associate Librarian for Information Resources, and was on display in the Class of 1965 Galleries from May 10 to July 30, 2012.

You may download a small, 8x10 version of the poster: GreatAwakening.jpg You may also download a handlist of the items in this exhibition: LikeFire. 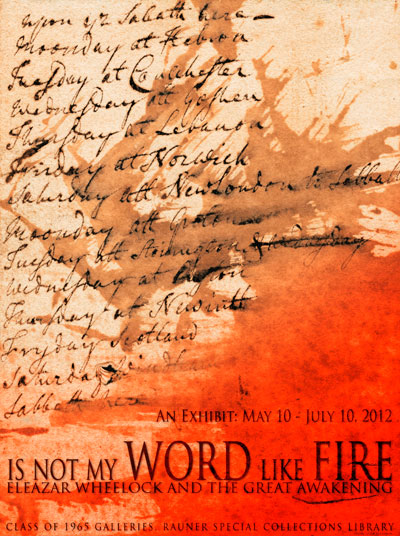