Engraved by the Hands of Angels: The Literary Illustrations of William Blake 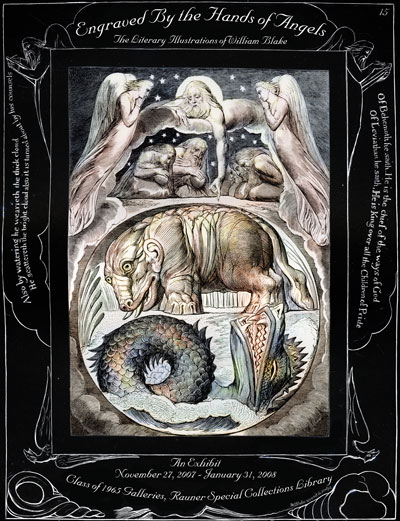 Celebrate the 250th birthday of William Blake, poet, painter, printer, and visionary, with an exhibition of his literary illustrations. On view are a proof-set of his Illustrations of the Book of Job, plates from a stunning full-color facsimile of the Paradise Lost watercolors, the masterpiece engraving Chaucer's Canterbury Pilgrims, a selection of books demonstrating Blake's career as a commercial illustrator, and other items from the Library's extensive collection of Blake materials. In addition, four engravings in the Hood Museum of Art's collections from Blake's series illustrating Dante's Inferno (not published until after his death) are on display at the Hood Museum through January 13.

"It is certain that the pictures deserve to be engraved by the hands of angels..." -- William Blake, letter to William Hayley, 22 June 1804.

William Blake has an unassailably popular reputation today, and many readers consider him to be a mad yet beloved genius.  In his lifetime, however, he was continually frustrated in his attempts to be recognized as a serious artist.  His own books, exquisite blends of words and images, failed to reach a large audience.  As a result, he relied on commissions, as illustrating other authors’ works was an important source of income.

As Blake wrote in Jerusalem (1804-20), “I must Create a System or be enslav’d by another Man’s.”  This desire for grand narratives may have drawn Blake to epic poetry.  Blake’s epic illustrations go beyond simple illumination to provide original interpretations.  John Milton figured for Blake as a prophet, and inspired Blake’s own epic, Milton (written 1804-1810).  In The Marriage of Heaven and Hell (1793), Blake wrote that Milton was “of the Devils Party without knowing it.” His watercolor illustrations for Milton’s Paradise Lost (1807-08) clearly foreground Satan as the epic’s hero.

Dante’s Inferno and the Book of Job may seem unlikely subjects for Blake, whose philosophy rebelled at the idea of a divine system of eternal punishment.  The Dante and Job series were both commissioned late in Blake’s life by John Linnell, a younger artist who introduced Blake to his circle.  These last works express deep ambivalence toward the moral universe of their subjects.  Blake’s illustrations offer sympathy toward individuals suffering beneath a scheme that figures their resistance as sin.

In 1806, Blake’s sometime-patron, Robert Cromek, commissioned the artist Thomas Stothard to produce a painting on the subject of Chaucer’s Canterbury Tales. They planned to make an engraving of this painting and sell copies by subscription.  Blake had been expecting the commission, and later claimed that Cromek and Stothard had betrayed him by stealing his original idea.  Blake decided to paint the subject himself, and engrave and print copies in his own studio.  The work was first exhibited in Blake’s brother’s hosiery shop in 1809.

Unlike many of Blake’s other literary illustrations, which envision individual episodes from longer narratives, Chaucer’s Canterbury Pilgrims encompasses Geoffrey Chaucer’s entire work in one epic tableau.  Blake saw Chaucer’s characters as timeless archetypes, “the physiognomies or lineaments of universal human life,” as he wrote in the catalogue/manifesto that accompanied the original exhibition.  Yet what strikes the viewer about Blake’s pilgrims is their essential uniqueness, their humanness.

Many of the characteristics that shaped Blake’s uniqueness as a poet and visual artist can be traced to his career as a printer and engraver.  Radical politics and the dissenting Church were the culture of his profession.  Many urban craftsmen rejected elite institutions despite their dependence on powerful patrons for their livelihoods.  Patrons who commissioned Blake to engrave other artists’ designs were often indifferent to his own desires and beliefs.  A professional commitment to his craft often conflicts with an underlying radical message.