Free Men All: The Civil Rights Movement at Dartmouth 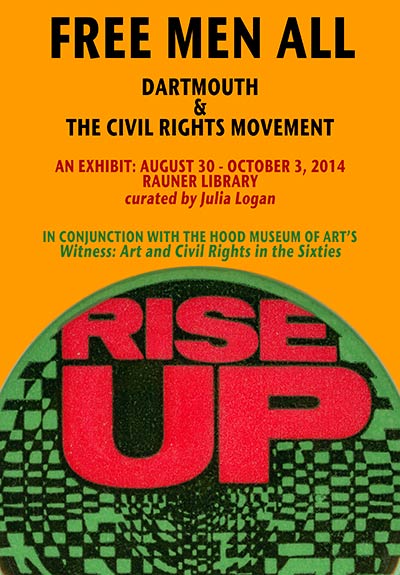 The Civil Rights Movement in the United States began to gain ground in the 1950s but came to the national forefront during the 1960s. Fueled by the desire for equality of citizenship for African-Americans, this movement is often remembered for such Supreme Court decisions as Brown v. Board of Education (1954), the Civil Rights Act (1964), and the Voting Rights Act (1965). The influence of these significant legislative decisions, as well as that of leading activists such as Martin Luther King Jr. and Malcolm X, created momentum for the movement and ushered in new avenues for reform.

As the Civil Rights Movement spread across the United States, Dartmouth College served as a platform for social awareness and change. The history of the Civil Rights Movement at Dartmouth College in many ways reflects national events and sentiments. Students here spoke out against segregation in fraternities and athletics as well as mobilizing for voting rights. Numerous young men at Dartmouth worked tirelessly to bringing awareness of the movement to their own community here on campus, with the goal of effecting serious change both locally and nationally. The college administration, too, was pre-emptive in its establishment of campus organizations, such as the “A Better Chance” program or the Equal Opportunity Committee, that were meant to make higher education a reality for African-Americans.

The exhibition was curated by Julia Logan and was on display in the Class of 1965 Galleries from August 30 to October 3, 2014.